The grandparent spike spikes on.

Last fall I learned that the number of children who live with at least one grandparent had spiked upward over the last half decade or so. The one-year update of that trend was dramatic enough to justify a yikes-edition update. 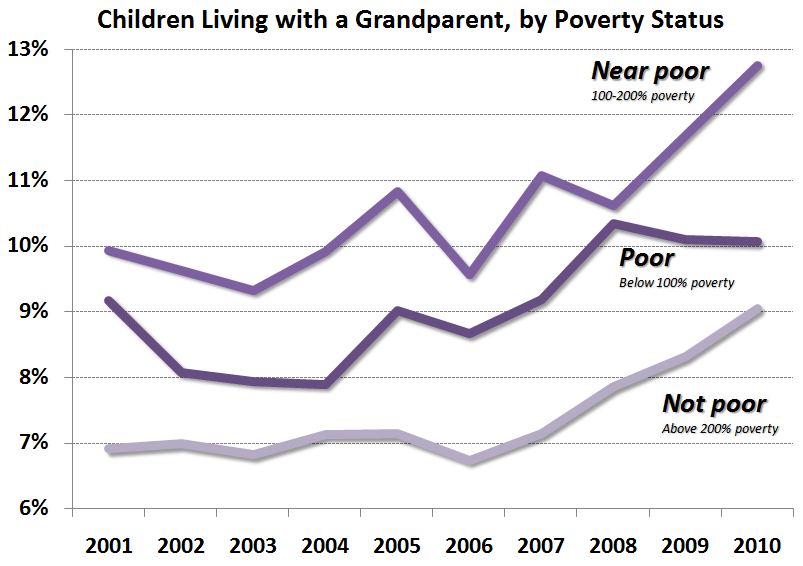 Again, the non-poor and near-poor lead the upward trend, while the highest rates are among near-poor. Although there were upward movements in the years before 2008, for the present I think we should file this under recession studies.

(For more on grandparents providing care for children, see this Pew report from last fall.)

Do you have data going back a few decades?

I was under the impression that it was standard practice for grandparents to live with the family for a long time, until the middle class became rich enough to send them off to nursing homes and forget about them.

The data as presented don't tell us how many children are growing up in multi- generational families that include both their parents and grandparents, and how many are living only with their grandparents.  That information would be helpful to the analysis.

I think multi-generational families can be a really wonderful for everyone involved.  I hope the option becomes more prevalent as we work to find more sustainable ways of living.  The problems are a) our culture of hyper-individualism makes the option unworkable for most American families and b) it is something that desperate poor people do, so the practice is perceived as a symptom of economic decay, and not as a positive, hopeful, taking-responsibility-for-our-lives-in-difficult-times option that is helping families survive.  My hope would be that we could find ways to support and celebrate the determination of these families instead of shaking our heads in sympathy for what has become of them.