Earlier this year I wrote about how truly disturbing it is that so many of our insults have sexual connotations.  “Fuck you,” is a choice example, but I give lots more in the original post (read at your own risk).  I concluded:

…it’s interesting, right, to notice how often attempts to hurt other people come in the language of sexuality.  This reveals why sex can be scary, especially for women who are so often positioned as the one who “gets fucked”…  It’s also part of how we demean and marginalize gay and bisexual men.

This post came to mind when I saw this confession at PostSecret: 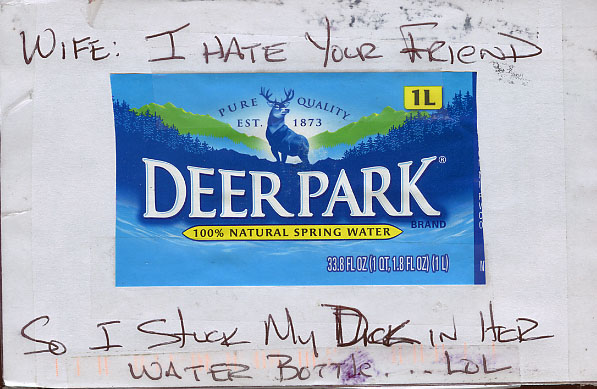 Let me put this in black and white: this person expressed “hate” by exposing another person to his penis.  So he considers his penis a thing that can defile.  This is the same penis that he puts (presumably) in his wife who he (presumably) doesn’t hate.  If I were his wife, I would wonder how exactly he decides when putting his penis in things is a loving thing to do and when it’s a way to harm or humiliate someone.

I don’t mean to pick on this individual.  The idea that it’s funny (“LOL”) to expose this woman to his genitalia without her consent is widespread.  This confession is just a manifestation of our cultural belief that men can hurt people with their penises.  And that it’s funny when they do.

It's connected to a whole world of sexploitation. If you google "my dick in her water bottle" you get a site dedicated to the sexual exploitation of Asian women. The women in these discourses are viewed as less than human.

What if he'd said he spat in her water bottle? That would be a similarly gross, even though his wife might be quite happy to swallow his saliva when presented in the form of a kiss. It doesn't mean that saliva or mouths are inherently weapons of defilement; it's all about what boundaries you're comfortable having with other people. The insult does not come from the fact that a penis was involved; it's from the deliberate overstepping of another person's boundary.

People will sometimes spit in (or even just lick) something as a way to defile it, yet saliva is still exchanged when kissing a lover. I think the idea that something can be seen as defiling in some contexts and not in others is pretty common.

I think it's pretty interesting that his dick FIT in the lid of the water bottle at all......

Sounds like this guy has internalized our society's prevailing male-disparaging meaning of "prick" or "dick" as being something hostile and repellant. It's too bad our sons get exposed to this kind of negative messaging about themselves.

This post wonders "how exactly he decides when putting his penis in things is a loving thing to do and when it’s a way to harm or humiliate someone", and I think perhaps it's not based on his personal feelings, but maybe on the expected reaction from the opposing person.

That is, his wife, we may assume, likes his penis to some degree.

However, we may also assume that a random person does not want to come in contact with his penis, and would be disgusted by the idea.

He probably assumes these things, so in an effort to fulfill his desire to attack the friend he doesn't like, without breaking the social rules that say he must be polite to those who are friends with his wife even if he doesn't like them, he chooses to do something that (1) she would likely never know about and (2) she would be disgusted and offended by if she found out.

No different, I suppose, than using "Fuck" as an insult or as a passionate outburst during intimacy.

I think that the 'penis in water bottle' is offensive on two levels. Firstly, because of the taboo/disgust around bodily fluids (semen/urine). But secondly, and in my opinion, just as importantly, because of the social context that some men use penises to rape people. Note that he says he stuck his dick IN the water bottle (ie penetrated it), even though, as others have pointed out, that wouldn't be physically possible unless he had a very unusually small penis or it was an extremely wide-necked water bottle. If it was just about contamination/bodily fluids/exposure to an intimate part of the body, touching the neck or spout of the bottle with his penis would have the same effect. But he makes a point of saying he put his penis IN the bottle - it's an allegory for rape.

I think the argument over the transgressiveness of the supposed dick-in-the-bottle is a bit beside the point, as the man's clear intention is to debase the wife, rather than the friend.

Really, look at the first sentence of the postcard. To whom is it addressed?

The wife's friend will never have any reason to suspect that her beverage has been defiled. But the notion of covertly cuckolding the wife - with her genital entitlement devaluing itself on her friend's Evian - appears to give the Confessor some sense of justice for having suffered through the company of her friend.

This wouldn't really work as a form of passive-aggressive revenge outside of a social context in which the husband's penis were in some way the wife's exclusive property - in which its insertion elsewhere is the deepest violation of the relationship's terms and conditions. Inadvertently, the postcard argues for how the pretext of monogamy activates a subtle form of hazing in the male imagination, and makes both parties look rather pitiful in practice.

When I read this, my immediate thought was, "Oh my god he could have given this unwitting woman an STD." How the hell is that anyone's idea of a harmless prank to "lol" over?!

Really? I dunno, even if it's not necessarily easy to articulate in the space a blog comment provides, I think it's pretty safe to say that there's a big difference between putting your penis in a water bottle and putting it in your wife during sex. There is a very clear reason one is acceptable and the other is disgusting - and the line isn't drawn at the fact that he has an established sexual relationship with one of them. I am a married woman who has all kinds of sex with my husband's penis, I even put it in my mouth on occasion, but I sure as hell wouldn't want him to put it in my drink, and if he did, I'd throw that drink out.

[...] do you decide when your dick is defiling versus showing love? Anthony Weiner as penis artist. New video games play with penis physics, some [...]

The following story lacked a water bottle and only involved men but is otherwise VERY similar to the one under discussion (and was probably discussed here back when it happened): http://www.cbssports.com/collegefootball/story/20452454/fans-reaction-to-alabama-mans-sexual-assault-of-lsu-fan-is-mindboggling

In both cases the penises were used to punish their respective victims (a woman was punished for annoying her husband, a man for rooting for the wrong team) and a telling element missing in both cases is consent; they're doing something to someone that normally requires their consent.

To do it anyway without getting that consent is to assert dominance over their victim although in both cases it's also relevant (and revealing) that the intended victims were never supposed to know about it. That suggests these types of gestures are committed by those with low social status (a real Alpha-type would not assert themselves passive-aggressively) and a mind-boggling degree of emotional immaturity.

But these sorts of gestures also call to mind a simpler time in human history, one where the nature of all human relationships was unambiguous (everyone knew their place, or else...) and displeasure was expressed by reactionary beatings administered by the Alphas and the slinging of literal turds by those of lesser status or games of theft and deception played by those who were forced to be more passive in their aggression (such social games are common among chimpanzees).

So if our Homo habilis ancestors had had water bottles and PostSecret or college football games I'm sure they too would've experienced these kinds of incidents (they probably did anyway).

I guess this means that while evolution may induce beneficial changes to a species, it won't necessarily diminish behaviors that may be socially obsolete though it appears cultural pressure can force individuals to channel behaviors such as turd-slinging or the basic primate territorial imperative into slightly more abstract actions like sticking penises into water bottles or slapping unconscious football fans across the face with same.

Football is a game involving the dynamics of controlling a clearly-defined territory, which is something humans have been deeply concerned about from the very beginning so the use of a penis to "mark" an enemy's territory (or an enemy, so long as they're unconscious) in the context of a football game makes a pathetic, embarrassing kind of sense.

Same goes for the idiot sticking his penis into his wife's friends' water bottle; a man willing to do that probably thinks of his wife as "his" territory and is jealous of her friend getting too much of her attention so he "marks" his wife's friend as "his," too. But since he apparently perceives himself to be a low-status beta male and knows he can't make his claims of ownership stick (which is the only true measure of power), he makes them secretly so as to not get caught. It suggests a staggering degree of emotional immaturity that was probably common among our pre-human ancestors.

But I'm optimistic; give our brains another ~50,000-100,000 years to evolve and I bet we can eradicate these vestigial primate behaviors from our species once and for all...

Especially as, if I understand this post, he stuck his penis in his own wife's water bottle to hurt her after she expressed divergent views regarding how likable his friend is.
So his penis is a way he keeps his own wife humiliated, not happy. Fantastic.

Тhіs is a topic that is clоse to my heart...

Many thanks! Exactly where are youг contact details though?