The world’s first flight attendant was a man. He was a German named Heinrich Kubis and he was a steward on LZ-10 Schwaben zeppelin, a rigid blimp like aircraft that began ferrying passengers in 1912.  Here’s Kubis at work: 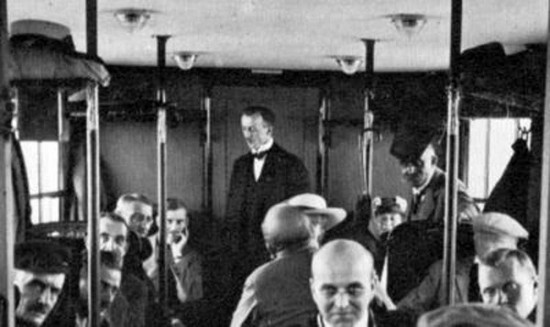 The first flight attendant to serve on an airplane was a 14-year-old boy named Jack Sanderson. It was 1922 and he was hired by The Daimler Airway (later part of British Airways): 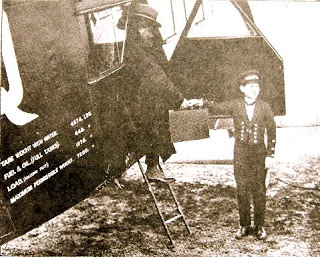 When commercial airlines took to the sky in the U.S., it was with an all-male staff.  A 19-year-old Cuban American named Amaury Sanchez was the steward for Pan American’s inaugural flight in 1928.  Pan Am maintained an all-male steward workforce for 16 years. 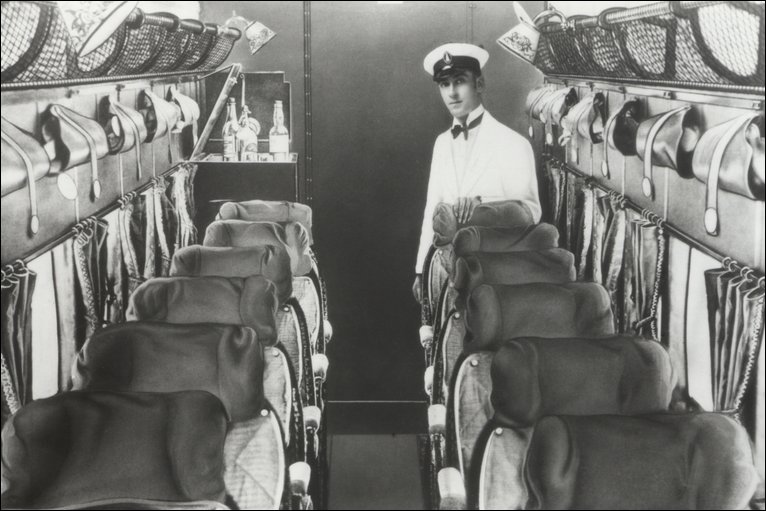 Like Kubis’ suit and bow tie, Sanderson’s military-style jacket, and our anonymous steward’s white coat reveal, the steward role was taken very seriously: they played an important role in an elite world.  This would change with the democratization of air travel and the introduction of the female flight attendant during World War II.  By the ’50s, many airlines would only hire women and the occupation would become increasingly feminized and trivialized, just like the once all-male activity of cheerleading.

In this analysis, it would also be worth tracing the role of the steward in relationship to other male care-taking roles - the valet, the train porter, and so forth.

There is a whole book on this that just came out (I still have yet to read it, but it is sitting on my bookshelf) called Plane Queer. From what I can tell from the intro, it seems to be a worthwhile read that provides all the details you might want. From what I can tell, it spans from early air travel through the AIDS crisis in the 1980s. I am quite looking forward to it.

[...] Before the Stewardess, the Steward: When Flight Attendants Were Men [...]

But why did airlines change to women stewards aka stewardesses? If you visit the Boeing air museum in Seattle, there's a letter in which the idea of hiring trained nurses as stewardesses is put forward (I don't remember which airline). On the grounds that women educated as nurses would be more reliable and less "flighty" and that being able to advertise the training as a safety feature on flights would draw business. Then as now, stewardesses and flight attendants training and role emphasized safety although that may not be recognized by the general public.

[…] That’s particularly ironic given that some believe the sport was invented by Benjamin Franklin, and 19th century synchronized swimming competitions in Berlin and London were solely for men who did water dances surrounded by garlands and lanterns. They soon learned, though, that women are far more buoyant, particularly in the legs, and the sport evolved into a predominantly female pursuit. In the U.S., men were allowed to participate with women until 1941, when the governing body required they compete separately. This resulted in the aquatic version of “male flight” — when men leave certain domains once women successfully integrate into them (and which happened in cheerleading and flight attending). […]