Americans Underestimate How Many Other Americans Support Same Sex Marriage

Here’s an interesting new wrinkle in the data on support for same sex marriage.  According to Gallup, 53% of Americans now favor such marriages, but we don’t necessarily think other people do.  Overall, Americans, on average, think that 63% of their fellow citizens oppose same sex marriage; in fact, 45% do.  That’s an over-estimate of 18 percentage points! 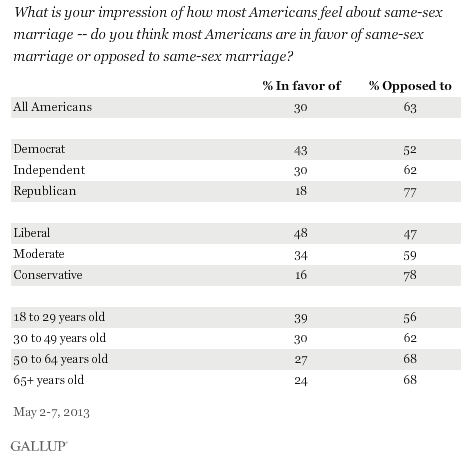 Interestingly, Americans of all stripes — Democrat and Republican, liberal and conservative, old and young — underestimate support for same sex marriage.  Liberals come the closest, thinking that 48% approve; conservatives are the farthest off, thinking that only 16% do.

This data resonates with the recent finding that both Democratic and Republican politicians underestimate their constituents’ progressiveness.  I suspect that these misconceptions may make politicians wary about pressing for progressive policies; I wonder how similar misconceptions among the voting public might shape the pace and trajectory of social change.

I don't know if one could say that politicians don't know what the prevailing view is of their constituency in general. However, I believe that politicians are aware of the political price that one would likely pay for supporting more liberal policies, due to the deep-pocket spending that many private interest groups can pay to try and scuttle a campaign, both during primaries and during the general election. It's kind of like how Prop 8 in California was heavily funded by a small group of people who didn't even live in the state, which - undoubtedly - skewed people's perceptions of gay marriage toward being more against it than they might otherwise have been. (Indeed, although Prop 8 passed, most Californians who were interviewed about gay marriage were in support of it: http://fivethirtyeight.blogs.nytimes.com/2013/03/01/poll-finds-record-support-for-same-sex-marriage-in-california/ )

An alternative hypothesis is that people over-report their support for gay marriage to pollsters. From election polls, we know that asking people how they believe other people will vote is more predictive than asking how they will vote. It may be that fewer people wish to be seen as the sort of person who opposes gay marriage than actually are uncomfortable with the idea.

[...] Americans Underestimate How Many Other Americans Support Same Sex Marriage — This is in line with the fact that most conservative positions poll much worse than politicians of any stripe believe. Viz the recent votes on gun control in the Senate. Strangely enough, Your Liberal Media significantly overrepresents the socially marginal ideas of the GOP as being a balanced part of the American zeitgeist. Think about this: Why aren’t the core GOP stances of evolution denial and climate change denial laughed right off the newspaper page and television screen on the face of it? In any rational society, they would be. Like many if not most GOP positions, these aren’t debatable issues among intellectually honest people with a grounding in reality. Conservatism has become a religion. [...]

Public opinion on gay marriage has been changing very quickly. I feel like the public's current guess on how many people support it would have been accurate just a few couple years ago.

i suck my own cock

But it doesn't really matter how the general population feels about same sex marriage. Or how people answer a gallup poll. What matters is how voters feel about it in the voting booth. And the vast majority of the time, if same sex marriage is put to the voters, it is voted down. Politicians don't answer to the will of the people, they answer to the will of people who VOTE. And voters are anti-gay in numbers greater than the general population (due to a variety of factors; age, race, income level, etc.).

[...] Americans Underestimate How Many Other Americans Support Same Sex Marriage » Sociological Images Here’s an interesting new wrinkle in the data on support for same sex marriage. According to Gallup, 53% of Americans now favor such marriages, but we don’t necessarily think other people do. Overall, Americans, on average, think that 63% of their fellow citizens oppose same sex marriage; … [...]