Dylan Matthews, blogging in the Washington Post, discusses a very interesting paper that provides evidence showing that politicians seriously underestimate the progressivity of their constituents.

David Broockman and Christopher Skovron, the authors of the paper, “surveyed every candidate for state legislative ofﬁce in the United States in 2012 [shortly before the November election] and probed candidates’ own positions and their perceptions of their constituents’ positions on universal health care, same-sex marriage, and federal welfare programs, three of the most publicly salient issues in both national-level and state-level American politics during the past several years.”  They then matched the results with estimates of the actual district- and issue-speciﬁc opinions of those residing in the candidates’ districts using a data set of almost 100,000 Americans.

Here is what they found:

The following two charts illustrate this bias when it comes to universal health care and same sex marriage. 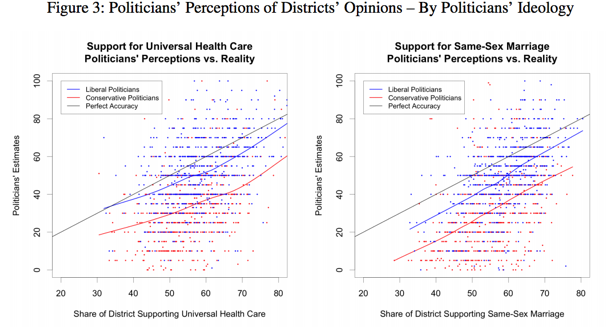 The X axis is the district’s actual views, and the Y axis their legislators’ estimates of their views. The thin black line is perfect accuracy, the response you’d get from a legislator totally in tune with his constituents. Lines above it would signify the politicians think the district more liberal than it actually is; if they’re below it, that means the legislators are overestimating their constituents’ conservatism. Liberal legislators consistently overestimate opposition to same-sex marriage and universal health care, but only mildly. Conservative politicians are not even in the right ballpark.

One consequence of this disconnect is that office holders, even those with progressive views, are reluctant to take progressive positions.  More generally, these results speak to a real breakdown in “the ability of constituencies to control the laws that their representatives make on their behalf.”

"Perhaps even more unsettling, the authors found no correlation between the amount of time candidates spent meeting and talking to people in their districts while campaigning for office and the accuracy of their perceptions of the political positions of those living in their districts."

So what are we supposed to do to communicate what we really want then? Did the authors find anything that did work?

Wonder how much it has to do with the relative conservatism of people in their district, in their age cohort?

I'm not surprised. Have you ever listened to a city council meeting? The people who show up for public comment are not much like the general population. A lot of them are schizophrenics. The people who show up to speak on specific issues are frequently outraged and not very well informed, and tend to speak in a disorganized way (whether because they've been waiting a long time or because they're flustered and not used to stepping behind a podium for two minutes). I would characterize them as more anxious than, say, a random survey of people at a supermarket, or even a likely voter. Even if you know that you're only seeing a small segment of the population, it's hard not to have a distorted view.

Where did those trend lines come from? Also, what is up with those politicians who selected 0% or 100%- do they understand math at all?

[...] Politicians Overestimate their Constituents’ Conservatism — This is thanks to the Republican stranglehold on Your Liberal Media these past few decades. And yes, there’s a typo in the headline. Preserved from the original. [...]

The study is flawed for a truck load of reasons. 1) It pits the politician's views against the voting populace as a whole. But that's not who shows up to the primaries and not who the politicians are focused on. 2) It makes the claim being for same-sex marriage makes you liberal: shoving libertarians into "liberal" doesn't work.

Once upon a time, politicians realized what century it is ...

HRC: Inclusion and Privilege in the LGBTQ Community | thenerdfemme — March 30, 2013

[...] someone of the same sex, but support for gay marriage is rising in every demographic. In addition, politicians frequently overestimate the conservatism of their constituents. So, the question of how HRC’s logo became viral is not really a very interesting one. It [...]

Americans Underestimate How Many Other Americans Support Gay Marriage — September 12, 2013

[...] data resonates with the recent finding that both Democratic and Republican politicians underestimate their constituents’ progressiveness. I suspect that these misconceptions may make politicians wary about pressing for progressive [...]

We are a center left country run by a far right political cabal.

I'm not entirely certain the politicians in questions care about whether or not their constituents are conservative. When one is staging a massive power grab, one will say anything while doing the Machiavelli under the table.