Women in Hollywood: Underrepresented On the Screen and Behind the Scenes

The Geena Davis Institute on Gender in Media has released several research reports detailing gender inequalities in Hollywood, both in front of and behind the camera.

To get a sense of how men and women are portrayed on the large and small screen, researchers analyzed 11,927 speaking parts from three sources: 129 top-grossing family films (rated PG-13 or lower) released from 2006 to 2011, 275 prime-time programs from 2012 (from 10 broadcast and cable channels), and 36 kids’ programs that aired on PBS, Nickelodeon, or Disney in 2011. The analysis indicated that women are underrepresented as characters in speaking roles, as well as narrators:

However, gender differences in representation aren’t just about who is on the screen; it matters how they’re depicted, too. Female characters in the sample were more likely to be sexualized, including factors such as sexy clothing, exposed skin, and having their attractiveness specifically referenced by another character:

Men and women were also depicted differently in the workplace. In the sample, few female characters were presented in high-level positions within their occupations:

What about behind the scenes? Researchers associated with the institute looked at the gender breakdown of those employed in behind-the-scenes jobs (writers, directors, producers, etc.) in Hollywood as well. Unsurprisingly, the results indicate that women remain significantly underrepresented in these positions.

According to their analysis of the 250 highest-grossing films in the U.S. in 2012, women held just 18% of these positions. In fact, women’s representation in these behind-the-scenes roles has been basically stagnant for over a decade: 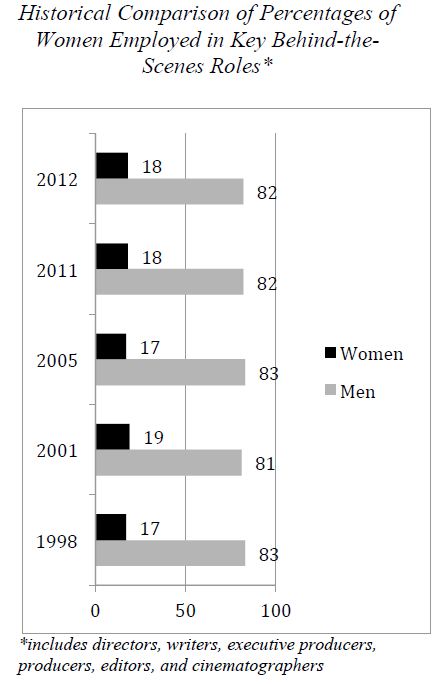 There’s significant variation behind the scenes as well. Women made up a quarter of producers and one in five editors, but only 9% of directors and 2% of cinematographers: 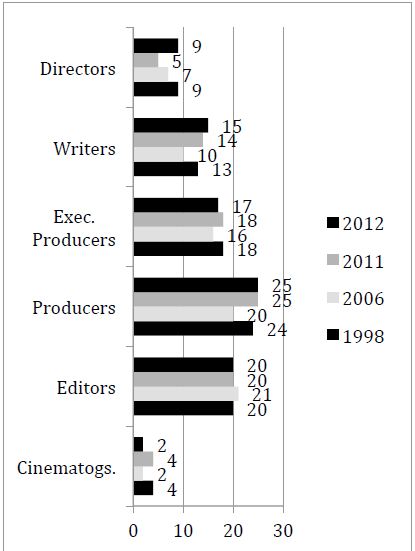 Women hold a larger proportion of behind-the-scenes roles in broadcast television than in the film industry. Looking at a randomly-selected episode of every drama, comedy, or reality show that aired during prime time in the 2011-2012 season, 26% of these roles went to women: 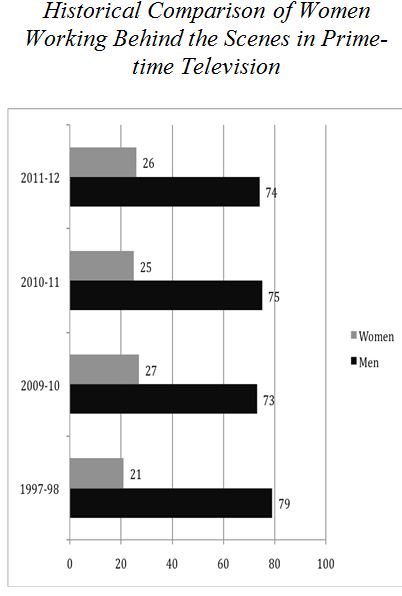 Again we see wide variation in the different behind-the-scenes jobs. Women are much more likely to be producers than directors in the sampled episodes, and only 4% of directors of photography were women. And while the percent of female creators and writers for prime time TV shows jumped in 2011-2012, less than a third of either position was held by women: 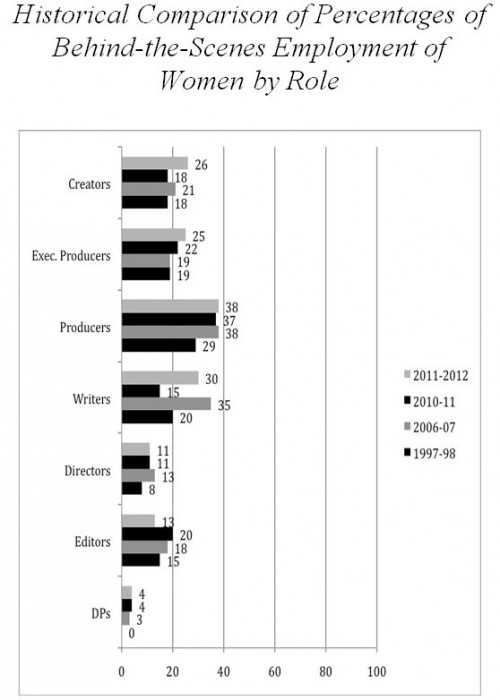 For more on representations in Hollywood, see our earlier posts on race and gender in films and Anita Sarkeesian applying the Bechdel test to the 2012 Oscar Best Picture nominees.

Not at all questioning the veracity of the statistics, but I would be interested to know more about why top box office/highest grossing movies were selected twice as samples. What makes highest earning movies a good sample for this kind of research? I hypothesize that the researchers wanted to sample the movies have the most reach in society, and think that's a really good reason to choose these samples. But there are some problems with it as well. For one thing, the movies that people *may* have been interested in seeing are often not distributed in their region, or they are marketed poorly/not at all. In other words, a highest-grossing list may reflect things other than what audiences would have chosen to see with more even distribution and marketing.

Furthermore, "top box office' also does not necessarily reflect a movie's critical or financial success. Many "top earning" movies are lambasted by critics and audiences alike, and/or underperform, sometimes even losing money. So even if they landed in the top 250/129 lists, that doesn't necessarily indicate audiences were really into them, or that they were financial successes. Finally, and this is bit silly of me as it's pointing out the obvious...but the highest grossing films are not necessarily where many men and women in the film industry *choose* to work on.

In addition to being a business with it's eye on money-making, film is also a highly artistic endeavor, so it's often not a matter of just being hired, but a matter of *not* pursuing certain work. Not so much for all members of the crew, but most definitely for the jobs listed in the sample. It's not like working at any bank that will hire you, even if there is a good wage involved.

- One final observation, concerning this quote.

"Women made up a quarter of producers and one in five editors, but only 9% of directors and 2% of cinematographers."

I only bring it up because people often mistakenly assume that directors are the masthead of movies. Not so. They are more "replaceable" than many other important positions. Producers are king and queen in any film production, the one everyone must answer to. And editors arguably occupy the same importance as directors, if not more. In fact, a film without good direction can be salvaged, but any film without a good editor will be utter crap - and there are editors who have saved horribly directed movies. So I take it as a perversely positive thing (because 15% and one in five is hardly great) that there are more female producers and editors than there are directors.

Finally, here is one reason why there is an astoundingly small number of female cinematographers. Does anyone know of other reasons? Most cinematographers start out doing very technical work, namely camera and sound operating. The problem is that these sort of jobs are physically demanding, a lot of heavy lifting and maneuvering and such, requiring great strength and endurance. It is more difficult for women to be hired for such positions over men, thus creating an unfortunate barrier to cinematography positions (which can still be quite hands-on, depending on the production).

I know they are just Key Findings, but I wish they had gone into more detail about how they defined "sexy attire" and "thin". Not doubting their findings, but those are two things that can be subjective. It's interesting that for physical attractiveness (also subjective) they measured references. Why not use the same approach for thinness?

[...] urged the society to collectively work in tandem with government efforts to ensure the safety of women in public places. She stated that in the aftermath [...]

WOMEN IN HOLLYWOOD: UNDERREPRESENTED ON THE SCREEN AND BEHIND THE SCENES | Welcome to the Doctor's Office — March 21, 2013

[...] Sharp. “Women in Hollywood: Underrepresented on the Screen and Behind the Scenes.” Sociological Images. 21 March [...]

[...] a lady in Hollywood sounds exhausting, though Jennifer Love Hewitt has schooled how to understanding with a physique [...]

[...] a woman in Hollywood sounds exhausting, but Jennifer Love Hewitt has learned how to deal with the body [...]

[...] directed by women and featured women in leading roles. In an industry where women are so heavily underrepresented we feel this is something to [...]