I featured the two-page ad below in one of the first posts I ever wrote for SocImages (it was October of 2007 and we’d written less than 100 posts; today we’re approaching 5,000, but I digress…).  It’s still one of my very favorite images.

I use it in Sociology 101 when I argue that race, class, and gender are, among other things, performances. Activities, items, and behaviors carry class, race, and gender meanings. In order to tell stories about ourselves, we strategically combine these things with the meanings we carry on our bodies (a gendered shape, skin color and hair texture etc., and signs of economic wealth or deprivation).

The ad for PhatFarm deftly balances Blackness (the body), upper-class Whiteness (the sailboat), and femininity (the pink sweater).  In strategically using culturally-resonant signifiers, he challenges popular representations of the Black body. 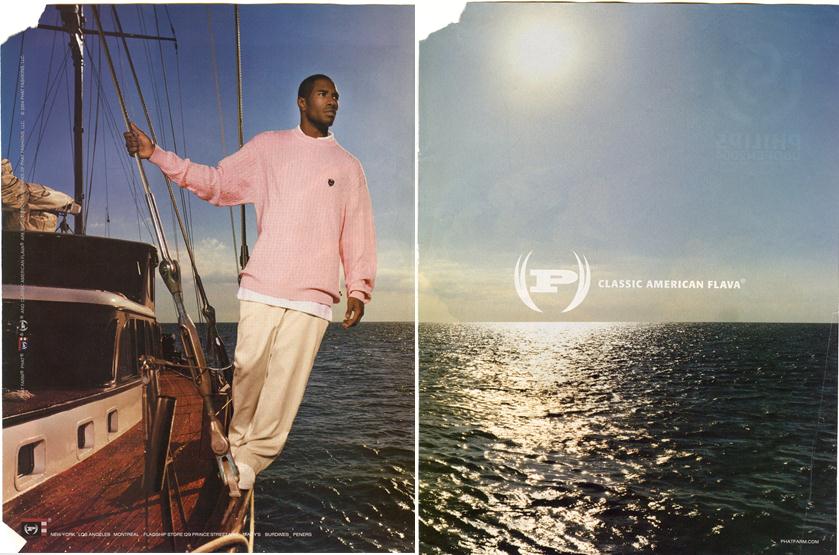 This happens in real life too.  Journalist Brent Staples powerfully discusses how he adds a signifier of upper-class Whiteness to his large Black body in order to avoid the discomfort of frightening people on the streets of New York.

…I employ what has proved to be an excellent tension-reducing measure: I whistle melodies from Beethoven and Vivaldi and the more popular classical composers. Even steely New Yorkers hunching toward nighttime destinations seem to relax and occasionally they even join in the tune. Virtually everybody seems to sense that a mugger wouldn’t be warbling bright, sunny selections from Vivaldi’s Four Seasons.

“It is my equivalent to the cowbell that hikers wear when they know they are in bear country,” Staples adds, referring to the fact that being perceived as dangerous can itself be dangerous, as we know from the example of Trayvon Martin and Rodrigo Diaz, who was shot in the head in January when he accidentally pulled into the wrong driveway thinking it belonged to a friend.

Thinking of class, race, and gender as performances gives us credit for being agents.  We don’t have control over what the signifiers are, nor how people read our bodies, but we can actively try to manage those meanings.  Of course, some people have to do more “damage control” than others.

If so, that places most of the burden for equal treatment on those who are most victimized by society. Doesn't that seem unfair to you?

Also, while it's probable that the Black man in that sailboat ad is purposely wearing a pink sweater because those in charge of that photo shoot directed him to do, from my 60+ years experiences as an African American, it seems to me that Black men wear pink shirts or sweaters more often than White males, and when worn by those men it doesn't appear to me that they are challenging any societal idea that the color pink is only for females. Instead, it sems to me that those Black men wear that color because it looks good on them.

I do similar "signifiers" myself-- I'm a (tall) white male, & when I
find myself walking behind a woman at night, just the two of us, I'll
whistle or get on the phone to sort of announce my presence, show I'm
not creeping up.  That is a related but separate issue, though; I'm a white male, coming from a position of privilege & trying to be aware of it.  Just interesting that the intersect is there.  Totally different context, but same use of positioning.

Interesting... I took the pink shirt as going along with the yacht, not adding in the feminine. I feel like rich men on yachts are often shown wearing more pastel colors.

Although brief, this was by far one of the more interesting, less opinionated analyses to date.  Thank you Lisa.

In the preppy fashion world, pink is a neutral for men. Well, it's an in-group signifier. I just find it unbelievably attractive on men. It flatters all skin tones.

Posted this over at Racialicious. I also think it belongs here

I just got done reading "Whistling Vivaldi: How Stereotypes Affect Us and What We Can Do" by Claude M. Steele, which takes it's title from that passage in Brent Staples book. It is a really good book.

I think being a black person in most settings in America involves navigating a whole series of negative stereotypes, some of which have relatively minor effects (handbag clutching) to some serious ones (having ones qualifications always questioned, people always being suspicious etc) up to some that have major life changing consequences (I got a gun pointed at me by a cop and slammed to the ground for the crime of jogging while black). In my day to day life, I know that as a black person in tech I do a fair amount of Stereotype management to the point it has almost become second nature.

The problem with this is it places a cognitive load on the stereotyped and puts them in danger of performing worse than they should, especially in situations where they care about the result. This is stereotype threat.

This is why some blacks perform poorly on tests, because they know the negative stereotypes about black intelligence (Bell Curve, Rushton, Watson etc), they therefore want to defy those stereotypes, stress about it, and that is mental energy that is not going towards the test. If before the test they are told it is a measure of reaction time, or even that this test has shown no discernible difference between blacks and whites, they perform the test as well or better than a control group of whites. This also holds true for women doing Math tests (where they are normally negatively stereotyped). And the super crappy thing is that the more highly motivated a black student is, the more susceptible they are to stereotype threat.

Even whites can fall prey to it (though to be honest, there are few opportunities for whites to be negatively stereotyped in day to day society that have any real consequences). For example, a test was done with white and black college students in golf (they played a round of golf). When whites were told that the test was about strategic thinking, they did as well or better than the black control group. When they were told it was about athletic ability, they did worse than the black control group.). This is because whites are stereotyped as being less athletic than blacks. The opposite effect was found for black students (they did worse when told it was a test of strategic thinking).

I tend to do really well on tests, beyond my actual intellectual ability (for example, I score really high on IQ tests). Of course I'm not that bright, so I doubt the usefulness of such tests, but it makes sense since I grew up in a majority black culture where blacks were never stereotyped as mentally inferior. I was also used to high stakes testing from a very early age and had developed all this studying strategies. I actually clashed in college with my very first CS professor because I did so well on the first test that he claimed I must have cheated (funny the same accusation was never made of the white students in the class who also scored a perfect score).