In “Just Walk on By: A Black Man Ponders His Ability to Alter Public Space,” author Brent Staples recounts his realization, in his early 20s, that his mere presence in public often made others uncomfortable or outright fearful, a fact they were not hesitant to make clear. Staples points out that while he poses no threat to  those around him, others’ fear of him — including an instance in which he was assumed to be a robber when visiting his editor’s office to drop of a story and was chased by security — puts him in potential danger:

…I soon gathered that being perceived as dangerous is a hazard in itself. I only needed to turn a corner into a dicey situation, or crowd some frightened, armed person in a foyer somewhere, or make an errant move after being pulled over by a policeman. Where fear and weapons meet—and they often do in urban America—there is always the possibility of death.

I thought of Staples’s essay as soon as I heard about the Trayvon Martin case, and particularly after Fox News ran a segment in which Geraldo Rivera basically blames Trayvon himself for wearing a hoodie:

Rivera removes the focus from the man who shot an unarmed teen and places it instead on what the teen should have done to not get shot. Yes, yes, people shouldn’t shoot unarmed minority teens, but Trayvon’s choice of clothing was, according to Rivera, equally responsible for the shooting. He normalizes prejudice and stereotypes — it’s just normal for people to cross the street when they see a Black or Latino youth in a hoodie on the street. Trayvon should not have “allowed” himself to be seen as a criminal — as though he could individually ensure racial stereotypes and prejudices were not applied to him.

Rivera argues that Trayvon Martin wouldn’t have been shot if he hadn’t been wearing a hoodie. But Staples’s experiences undermine this reasoning; he presumably wasn’t wearing a hoodie the many different times he was taken for a criminal or treated like a threat while trying to carry out his role as a professional reporter. Merely being African American was sufficient to make him scary, as it was enough to make Trayvon Martin “suspicious” to George Zimmerman, and it’s unlikely a cardigan instead of a hoodie would have changed the situation.

In support of Trayvon Martin, LeBron James tweeted a photo of Miami Heat players in hoodies: 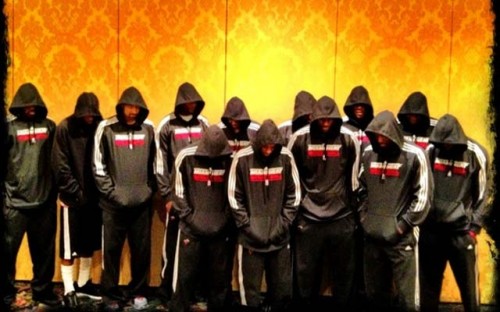 I saw that segment when it aired and even my fox news loving ultraconservative husband looked at me and said "That's just like saying she was wearing a short skirt, so obviously she wanted me to rape her."

This is the kind of racism that an abstractly liberal society intolerant of overt racism but tolerant of false equivocations produces.

geraldo's comments make no sense. if it weren't racist then why is a hoodie specifically dangerous for POC to wear?
isn't it about race and NOT the hoodie, if the hoodie on a white person doesn't portray a 'gangster lifestyle' making it absolutely OKAY for someone to gun you down?
Geraldo is just one of those white-identifying people of color that is willing to say anything and do anything to be accepted by the race he glorifies..

when your own son calls you out, when YOU geraldo have been seen sporting a hoodie, then your argument is invalid.

um, am I crazy in thinking that the Heat players wearing hoodies, obscuring their faces pretty deliberately look like they are performing "suspiciousness"? There are other ways to wear hoodies, no?

I took Geraldo's assinine comment as excusable in the context he said he would make it, telling his 'dark skinned' son (he has a dark son?) to be careful not to give a bad impression by looking 'the part'. Many other black parents have expressed similar: the 'blackmotheritis' that, from their worried hearts, has them suggest to their sons that they not, say, reach near their waistbands if they itch, in public.

Its one think to say on the news "With that short skirt, she was asking for trouble" and another to say to ones own daughter on the way out, "hey sweetie, you may want to reconsider how you look to others in that short skirt"

Geraldo sounds like an asshole, but it's possible I'm just reading that because he has a moustache that makes him look like a supervillian. But if he wanted to be taken seriously, perhaps he should shave the supervillain moustache. When people see moustaches like that, all they see is villains with cats in their laps twirling the end of them and pressing a button that will attempt to kill our hero. That's just an automatic reaction, it's not bad.

Anna Quindlen wrote The Problem of the Color Line in 2000 in response to the Amadou Diallo murder. It is an excellent read.

I understand Geraldo is voicing a stereotype that many people use.  That being said, I'm appalled at how there isn't any dialogue about how harmful the stereotype is.  (Or maybe there is in the full cut?  I'm not betting on it though.)  A kid lost his life because he was stereotyped.  That's the harmful behavior we need to identify, address, and work to change.  Not letting your kids wear hoodies is just treating the symptom, not the cause.

I saw a tweet that I think sums things up nicely

Daniel Squadron: "stereotyping is not just a problem for some communites, it's a problem for all communities"  He stated "Wearing a hoodie on the Senate floor in solidarity."  Squadron is a NY state senator and I find it encouraging that there are people in congress that see what the root issue it here.

Everybody is hating on the Black race, it seems. Zimmerman's dad is Jewish and his mom is Hispanic. These two groups have also experienced prejudice but that didn't stop Zimmerman from being prejudiced. What race is Geraldo? He doesn't look white to me. What if he should experience racism? What some people don't like for themselves is what they do to others!

[...] does that mean that anyone who is not Latino or Black can wear a hoodie in Rivera’s terms?  Here is an interesting article about how “Rivera removes the focus from the man who shot an [...]

Just about every demographic is starting to remind me of the transgendered, including Black people.  Particularly when they insinuate I am "phobic" for being nervous in the presence of Black men.

I have learned the hard way that men can be unpredictably violently sexist.  Regardless of ethnicity.   True, I am pretty much too old to be seriously worried anymore about being raped, and yet some 62 year old man got massively frisky just a couple weeks ago and I had to practically break his arm...  Seriously, they never fucking stop. ugh.

And last friday some repair dude came into my house and somehow or another the subject of neighborhood crime came up, and I said "oh I could tell right away that you were okay".  Later, I realized that he might have thought I was referring to his race, but uh no, it is the Privileged Penis Brain syndrome which concerns me.

I am wondering if the fact that Martin punched a man in the back of the head and then starting kicking him after the man fell down, had anything to do with him getting shot.  Ya know, probably not, but it would be interesting to know if there was some kind of connection there.

Hmm... Now where have I heard this "You could have avoided being a victim of crime X if you just didn't wear clothing Y"-excuse before...

Even mainstream media is bashing this guy.  It was part of "The Word" on the Colbert Reports:  Dressed to Kill.  He mad it pretty obvious how stupid it was to judge someone based on them wearing a hoodie.

There is something he could have done to protect himself.

But how would this have turned out if Martin had a concealed carry permit, and Zimmerman were the corpse?

Okay Geraldo, I guess people shouldn't wear their black skin and change their name to Tom so people don't assume your a threat. This is ridiculous.

[...] of that which is – according to prevailing cultural understandings – worthy of suspicion.  Sociologists have critiqued these understandings for their role in perpetuating prejudice and [...]

Wow, that's what I was exploring for, what a data! existing here at this blog, thanks admin of this site.