As we’re sure you’ve noticed, one thing we’re really interested in is the social construction of gender and the way the world is divided into things that are ok for men to do and things that are ok for women to do. This dividing of the world by gender includes everything from food (salad vs. steak), pets (cats vs. dogs), and even colors (pink vs. blue). Generally, people are punished for not following these rules, though men are often punished more harshly for crossing into “feminine” or “girly” territory. At the same time, because these rules are socially constructed, they get fiddled with and sometimes people can get away with crossing the gender line–or even make it cool to do so.

Abby sent in this photo of a t-shirt (found here) similar to one she saw a boy wearing at a school picnic recently. Another boy was also wearing a pink shirt, though without the explanation for why. 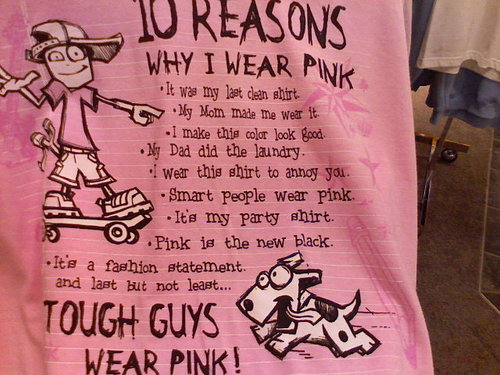 I think it is interesting the way the shirt challenges some dominant ideas about gender (pink = smart) while reinforcing others (e.g. men don’t know how to do laundry).

Another example of pink being redefined as an appropriate color for men to wear (other than Don Johnson in the 1980s) is Andre 3000 from Outcast (image found here): 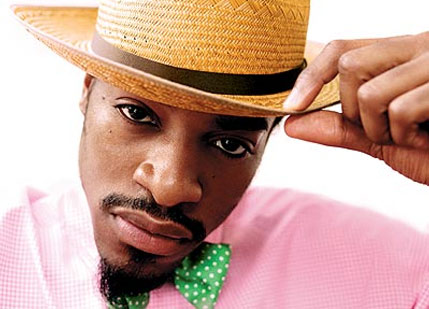 In fact, Andre 3000 was one of several hip-hop stars in the last few years who have clearly cared about fashion and re-popularized what has been described as a “dandy” fashion sense (see next photo, found here). So something that we generally associated with women (caring intensely about fashion) has become an acceptable, or even hip, part of a masculine image. 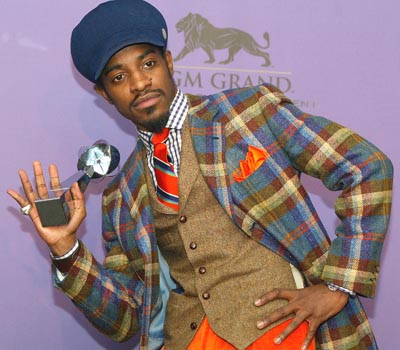 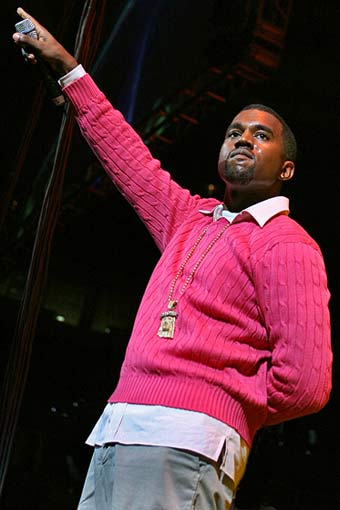 Here is a picture (found here) of the character Chuck Bass from the TV show “Gossip Girl”: 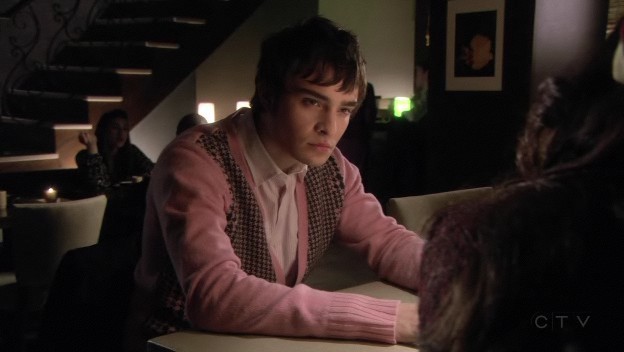 Huh. While looking for other examples for this post I came upon The Charming Dandy, which has the tagline “a feminine eye for every guy.” It gives advice about fashion, manners, decorating, and tips for grooms (I did not previously know the names for shawl, peak, and notch lapels). The things you discover.

Anyway, these pics could be useful for showing how our gender dichotomy (pink = girls, blue = boys) is actually a lot more contradictory, that there is nothing “natural” about associating pink with girls, and that we often change gender rules while failing to acknowledge this has any bigger implications for our entire system of dividing the world by gender.

Thanks to Abby for the image and post title!

Two comments from the Catholic world:

1) The question of men in pink comes up twice a year, on the 3rd Sunday of Advent (November) and Lent (usually March). While the color for the season is purple (=penitential), the liturgical color allowed/encouraged for those Sundays is pink (although renamed rose). Many parishes have beautiful rose-colored vestments. The gendered nature of the color is apparent both in the way the priests speak about and wear the vestments, and in the comments made by members of the assembly. The other layers of meaning that get layered over the pink/male priesthood by reports of the number of gay men in the priesthood, by sex abuse scandals and the like make for two days of high gender consciousness in the Church calendar.

2) Pope Benedict XVI seems to be one of those men who like clothes and fashion. He revived the use of a fur-lined cape as a papal vestment. I haven't done a Google search, but I think I've heard more about papal clothing in the few years of his papacy than in the decades of Pope John Paul II's. The Catholic press is still figuring out how to talk about this.

article by Ben Goldacre
on his blog about the pink for girls thing, taking on the evolutionary psychologists who claimed last year that 'girls prefer pink because women gathered berries and had to look for shades of pink and red'.

He links to an article which says that 'pink for girls' is actually only a hundred years or so old - before then, pink was for boys because it was a version of strong, manly red!

I don't know about the tv show, but in the books, Chuck Bass is bisexual. And queer guys have always been "allowed" to care about fashion and wear pink.

Another interesting thing: I'm studying mathematics and the department sells tshirts with the university's name and Mathematics Department written on them. These tshirts come in gray, blue, yellow, and pink. The pink ones were chosen by a group of male students (a specfic class which doesn't usually have any female students), and large number of the guys in the department wear the pink math shirts.

To say males are punished for enjoying the color pink is the truth! My boyfriend is into wild hair styles and his latest venture is a hot pink and black mess. His experiences have been a never-ending source of fascination for me, because he works in a very public place and strangers talk to him and talk about him where he can hear on a daily basis, including small children saying things like, "Mommy, that boy is weird... boys aren't supposed to have pink hair." He gets approached and asked about it often.

This is also an excellent example of power. It was the high-profile hip hop stars, already hypermasculinized, who could both get away with wearing pink and, also, transform the cultural meaning of the color. Not just anyone could have done it.

Funny you mention about the salad vs. steak thing. Whenever my husband and I got out to dinner, I usually order a meat entrée and he orders a vegetable entrée. Invariable when the server returns with our meals, he or she always tries to give me the vegetable dish and my husband the meat dish.

I had a pale pink dress shirt in college (late 90s) that I would wear on occasion in more casual settings. I later found out that this was seen as evidence by some that, clearly, I was probably gay, regardless of my girlfriend at the time and very public, often vocalized, crush on Gillian "Scully" Anderson.

I don't know how it is overseas, by which I mean the US, but here in the Netherlands it's pretty common for guys to wear pink, although I myself prefer black :) It's welspread among a few subcultures, for instance the neogoth-newrave guys who combine flourescent pink with black. More noticable are the fortunated middle-aged men in salmonpink polo. And college students whom, as a prediction about the future, also wear pink polo's and spencers. Although brighter as their daddies. It's also popular among moroccan and turkish boys, who often combine tracksuits with pink tshirt or cap.

So pink is a well established color to wear for men. So much, that it's no trouble at all to find a male model dressed in pink at the website of H&M - a very big and omnipresent clothing retailer in the Netherlands and across Europe.

So, I was wondering, is it really that big of a deal for guys to wear pink in the US? And I just wanted to say it's real fun for me to follow this blog, because of this differences.

i may be repeating something everyone already knows, but the interesting thing about pink/blue dichotomy is that it used to be quite the opposite, as recently as the early twentieth century. blue was the correct color for gentle girls, mainly because of its association with the virgin mary. pink was for boys, though, because it was though of as a young person's version of warlike, manly red.

I have to agree with Erik--pink appears to be a totally acceptable color for men in Europe. It's been "educational" for me to uncover some deep-seated biases I have about gender roles and "acceptable" behavior/appearance while living here (I'm an American living in Switzerland). I'd always considered myself pretty open and accepting of people defining their own gender incarnation, but apparently I'm not. One interesting outcome is I find European men universally unappealing from a romantic or sexual point of view--they just don't seem like "men" to me. I have trouble believing that I'm even admitting this!

[...] U.S. The men are wearing pastel colors that are generally only worn by women in the U.S. (though as this post shows, men are, under certain circumstances, allowed to wear pink). The men also dance closely and [...]

[...] when I saw that can, I realized I was looking at a product for men that was pink, and not in an ironic or intentionally transgressive way. It’s more of a coral-pink rather than powder pink, but I asked several people what color [...]

Bubble yum! More guys should wear pink. And I remember the first example- it was sold by J.C. Penney along with a whole host of other annoying "little boy" sloganed t-shirts. I think another one was "Take my sister- please!"

haha. my little brother has that shirt. i think it's the only pink shirt my dad would let him wear.

I never liked the way that men are told by society that they shouldn't wear pink lest they be taken as gay. Why? Women can wear whatever color they want and no one takes them for being lesbian. But, then, being lesbian or bisexual for women is much less hated than being gay for men. Why?

I've always liked pink and purple despite the fact that I have been told that I shouldn't wear them because they are women's colors. But I wear them anyway because I like those colors. I own several items in pink: pink dress shirt, pink vest, pink & gray sweater, pink & black sweater, two pink & purple sweaters, dark purple pants, and purple turtleneck.

Yesterday, I wore one of the pink & purple sweaters to school; got lots of stares, but no negative comments. I no longer care about what people say.

what kind of pants goes with the pink wear of chuck bass?

actually, in china pink is for boys and blue for girls. Also, nowadays most of us kids think pink and purple are okay, and even jokingly think pink is manly. I remember in 5th grade my freind remarked purple was fine and ungay and only a few shades of pink were queer. everyone agreed, except the b*tch*s everyone hated. some people went so far as to say pink wasnt gay no matter what. pink hair, though, would be okay in a manga (except the ones you hate)but in public? a bit...... new, gayness aside.

What brand is the shirt is it on the bottom? chuck guy

It's a very interesting discussion, because color gender stereotypes are especially strong in the US, where from the 1940's onward, pink was pushed as a woman's color. "Think Pink" was the marketing slogan to convince women to embrace their femininity. Dressing girls in pink reinforced this role by conditioning with a set of rules that started with little girls, made of "sugar and spice and everything nice.
Originally, pink was designated for boys, as it was thought to be the stronger color. In Christian tradition, red was associated as male, and its ‘little’ sibling pink was used for boys. Blue was associated with the Virgin Mary and therefore considered feminine. After WWI, blue was used extensively for men's uniforms. Therefore, blue became associated as more of a masculine color. Interesting that in European stores you can find an extensive selection of pink tees, polos, sweaters, shirts and shorts for boys and men.
Gender color stereotypes imposed on boys and men's fashion create absurd limitations. What if the boy loves color pink? And I happen to know a few boys that do. I encourage my son to express himself and wear any color he likes. I wrote an extensive piece on Power of Pink - Who Said Boys Can't Wear Pink. You can check it here http://bit.ly/hItTne

My brother wears pink and purple and looks great all the time!