Women, Education, and Trends in Childlessness

In doing research for a book I may write about voluntary childnessness, I came across a telling graphic from the Pew Research Center.  First, note that the percent of women age 40-44 without a biological child has almost doubled since the late ’70s.  Today about one-in-five such women (18%) have never given birth: 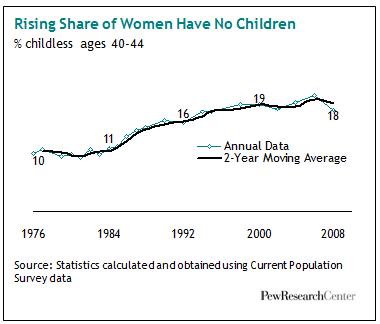 The percent of women is even higher among women with professional degrees (a master’s or equivalent and higher).  One-in-four women with a master’s degree, and nearly that many women with PhDs, have no biological children by ages 40-44.

Here’s where the really telling graph comes in.  Though women with higher levels of education are less likely to have biological children than other types of women, the trend  of increasing childlessness shown above doesn’t apply to them.  In fact, women with master’s and PhDs in the most recent data are more likely to have children than their counterparts 14 years ago.  In the first half of the 1990s, nearly one-in-three women with professional degrees did not have biological children; today it’s one-in-four. Childbearing among the most educated women, then, bucks the trend. It has gone up. 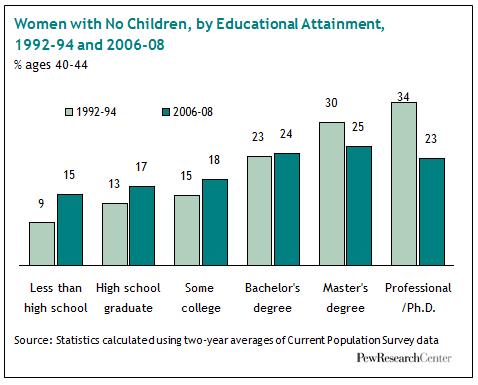 The data probably reflect greater endorsement of the idea that a woman can, or should be able to, balance both a career and a family, as well as the rise of policies that make that possible.  University of Florida sociologist Tanya Koropeckyj-Cox, who’s studied this stuff, says as much.  It may be hard to imagine now, but there was a time when having children would destroy a woman’s always-already fragile career; as much as we may love or hate the “mommy track,” at least today there is one.  Koropeckyj-Cox also suggests that women with higher incomes may have greater access to infertility treatments, making overcoming health problems or delayed childbearing more possible for them than it is among women with less education.

In any case, the data suggests an interesting story about gender, childbearing, educational achievement, and historical change.  I’d be happy to hear more interpretation in the comments.

I'm 45 years old, childless, and my highest level of education is a B.A. I chose not to have any children, in part, because throughout my 20's and 30's I couldn't afford one. Often I could barely afford to feed myself, so having a child seemed incredibly selfish to me.

I doubt that attaining more education would have changed my choice, because my amount of student loan debt would have been even greater.

I'm not going to go back to the original data source to check, but before you spend a lot of time interpreting this in the context of the mommy track and all that, you should confirm that the women without biological children (or who have never given birth) are actually childless.  Many women wait until their 40s and end up adopting, or having children via surrogacy, or have stepchildren.

That said, I think it probably is true that women with more social and economic capital are more able to make the work-life thing work, but that applies at all ages.

I'd be interested in seeing marriage rates considered alongside these data.

I wonder if this might be explained by the increase in the number of women with this level of academic attainment. It no longer requires as much (I said as much, I didn't say it doesn't take any) conviction/sacrifice for a woman to earn a PHD, therefore more women who seek to have children as well will have attained one... you are getting closer to a more general sampling of women rather than a very selected group.

WOMEN, EDUCATION, AND TRENDS IN CHILDLESSNESS « Welcome to the Doctor's Office — September 24, 2012

Great interpretation. On the other end of the income/education spectrum, there is an increase of childless, or child-free :), women without atleast some college education. Any thoughts on that?

This graph does not tell us much in and of itself. We can only try to analyze by theoretical speculation. I would assume that this trend is more likely to be an outcome of increased social inequality between higher and lower levels of education, as opposed to the fact that the idea that women can balance work and family is being more and more endorse by society. According to this reasoning, we would have seen increases in all education categories, assuming respondents were employed (which bring up another point, that in order to make that argument we have to control for employment status). So I'm gonna go with a structural/conflict paradigm explanation on this one. Women with masters/phds degrees are having more children simply because they are in a better financial situation than they were in the past. The opposite holds true for people with lower levels of education.

I also reject the following statement: "It may be hard to imagine now, but there was a time when having children would destroy a woman’s always-already fragile career;", simply because this is still the case today, especially among people of lower income/education.

I am interested in what the says about how abortion and other issues that influence one's desire to have children relate to this research. For example what percentage of women have had one or more abortions? What proportion have been a victim of a sex crime? Gender discrimination?  Income across their life span? And so on. It is certainly worth me pulling up the initial article to find out. Thanks.

Being in that age group myself (40-44), I'd suggest that demographic issues have a lot to do with it. I have observed that women my age overall (but especially those with college degrees and with professional careers) appear much less likely to have children than those either 10 years older or younger than us.  I think "children of the baby bust", born during the time of zero population growth, increased entrance of women into the professional workforce, etc, have been a group with a particularly low reproduction rates. I suspect the line in that first Pew chart will start to trend down again in a few years.

Oh, one thing I'm wondering. Have the rates of women with PHDs changed from 92-94 to 06-08? The shift in the data might have something to do with the change in overall population size in that group.

I recall how difficult it was for me to best dissertation help , and I am confident that I could delegate it to professionals with ease. That is why, for instance, I strongly advise that I seek assistance from a company like this. I already know where to seek for them; all I have to do now is consider the company’s competence, which can be put together swiftly and efficiently here. I also want to be of support to you. This is something I sincerely hope is the case. I’m crossing my fingers for a good outcome.

The study has highlighted that the number of women in childlessness is increasing, and there is an association between age and education. In 2008, the share of white women with a bachelor's degree or advanced degree was 27%, while the rate among Hispanic women was 14%. According to the report, the increase in the share of educated women has been associated with a lower childless rate. Yet, the decrease in childless rates is even more striking among younger women. If you want to become an educated woman, contact write my paper agency for help!

There is a large difference in childlessness rates between white and non-white women. Unmarried women with only a high school diploma are more likely to be childless, while those with some college education have a lower rate. The rate of childlessness has also risen for Asian and black women, although these figures are similar. Marital status is the most common cause of childlessness, with never-married women experiencing the lowest rate.

Our mission is to create millions of new ukulele players, which in turn helps millions experience the joy of music
.

Awesome, exactly what I was looking for, it's very easy to understand! paper minecraft

Very informative. keep it up

Ready to do my part of the job guys, just let me know where we stopped and I will continue from there.

Once you carry your own water, you learn the value of every drop. red ball 4

Is it hard to write a mobile application? I’m interested in writing a tourism application.

I’m pretty sure that robots will take a lot of our current jobs, but I am sure that they will create new jobs, easier ones for us. Just like it happened before.
alchemy game