This week on PostSecret I stumbled across the following confession: 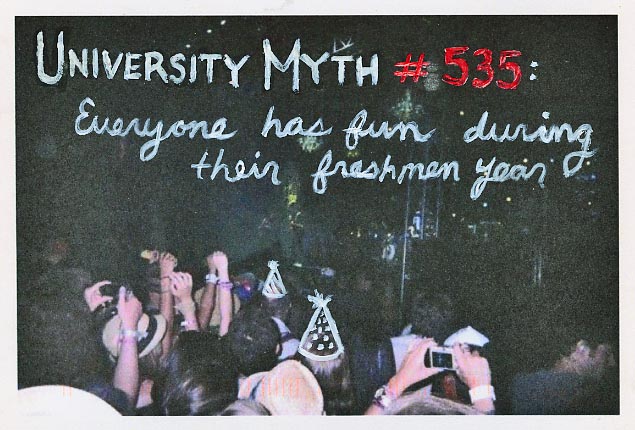 The idea that certain beliefs about college may not be true reminded me of the concept of pluralistic ignorance.  The phrase refers to a phenomenon in which a large proportion of a population misunderstands reality.

For example, while many college students think that lots of people hook up a lot, 80% of college students hook up less than once a semester, on average.  About 40% of those hook ups involve intercourse, while a strong third just involve getting horizontal and making out.  Students, for what it’s worth, also tend to consistently overestimate how much drugs and alcohol other students are consuming.

So, while “everyone thinks” that “everyone has fun during their freshman year.”  In fact, the person who wrote this confession may be a lot less alone than s/he thinks, even if most people think that everyone does, in fact, have fun.

The book "The Naked Roommate" addresses this and lots of other going-to-college myths. I highly recommend it for exactly that reason. It was all over book stores in the summer, it may still be on sale tables or book ends if you want to flip through it.

I'd say another obvious myth would be that all college students define "fun" in the same way.

Sex, drugs, and alcohol are surely parts of the notion of the "fun" people have in freshman year.

But when I think about what that time means in young people's lives, I think more of the thrill of getting out on your own for the first time, the ups and downs of newfound freedom, the unparalleled intensity of intimacy with others in the same boat, and the possibility of exploring intellectual pursuits that were once out of reach.

And with all of those exciting possibilities come huge downsides. The loneliness and detachment from the familiar, the discovery of your limitations, the loss of a safety net, the sexual and chemical experiments gone awry, the stress of a harder workload, and the even bigger stress of debt, and so forth. I suspect that to some extent, the "myth" of the fun freshman year was cultivated in an environment where a lot of students were getting a free ride, and it doesn't hold much water in an era of skyrocketing tuition, shrinking postcollegiate work opportunities, and heavy burdens of student debt.

This makes me wonder...how often is what we think of as "pluralistic ignorance" just a function of outdated expectations?

And here's proof that not all freshmen understand the difference between the singular and plural.

WTF?  I usually let most of the non-scientific bs slide on this site, but this is too much.  Lisa, you must have a very sad life if you only define "fun" as f*cking or being drunk.  The OP's post is worthless and offensive.

Another myth apparent here is that your freshman year is supposed to be the "fun" year. Yeah, I had fun in my freshman year, but I had even more fun during my sophomore year, and I hope to enjoy my coming junior year even more! To me, to look back on being a freshman is to look back on stupid decisions and naive outlooks on life. I feel kind of embarrassed by it. I'm looking forward much more to my senior year.

I thought everyone partied a lot in college, especially as a freshman. I definitely realized that is not the case when I got to college. It is a lot different than people make it seem and from what you always hear from other people.

I suppose media folks heard talk of a few incidents where a party got too out of hand and decided that could make a neat movie. Or a dozen neat movies. Then everyone sees said movie/movies and decides college must be like this? I don't know. I'd like to know how all this talk of druggin' and drinkin' arose, though. It could be interesting. Like what time period did college become known for its super crazy parties and what have you.

[...] is and that their peers are less concerned about it than they are. They also tend to think that everyone else might be having more fun. We suspect this is even worse now that everyone stalks each other on social networks.  Keep in [...]

Toilet cubicles range is made and manufactured with every washroom use and environment in your mind; and obtainable in a complete variety of colours ... klik https://medium.com/@toiletcubiclephenolic/cubicle-toilet-phenolic-jakarta-pusat-ukuran-per-m2-custom-murah-ae1b35e60199 untuk informasi selengkapnya.

Toilet cubicles range is designed and manufactured with every washroom use and environment at heart; and obtainable in the full array of colours ... kunjungi https://partisi-kamar-mandi.blogspot.com/2018/10/cubicle-toilet-phenolic-palu-murah.html for detail information.

If the vehicle is damaged, roadside assistance must certanly be called. A good towing company will get the automobile from the road and to a safe location. Crashed vehicles ... visit https://carcarrier.netlify.app/car-carrier-makassar-timika.html for more offers

At KontraktorEpoxy.co.id we are able to satisfy all of your epoxy needs. We specialize in every programs of coating shown in our solutions section. We have the capacity to change any older... click https://floorhardener.jabodetabek.my.id/2020/08/floor-hardener-pancoran-mas-depok.html for detail.