The phrase “pluralistic ignorance” refers to a situation where a large proportion of a population misunderstands reality.  They may all agree, but they are, nonetheless, mistaken.  This data on University of California-Santa Barbara students from the National Collegiate Health Assessment is a great illustration of this idea; it’s also a great illustration, however, of a terrible, terrible illustration.

Let’s get past the bad graphic first.  The white bars (which represent the percent of people reporting that they themselves used opiates, alcohol, or cocaine) are all the same height, despite the fact, for example, that 56.9% of students reported using alcohol 1-9 times in the last month, but only 0.3% reported using cocaine.  So the bars do not actually represent the percentages they are supposed to.  The red bars (which represent the percent of people that respondents think are using drugs and alcohol) suffer from the same problem.  In one case, the white bar should be even higher than the red bar. 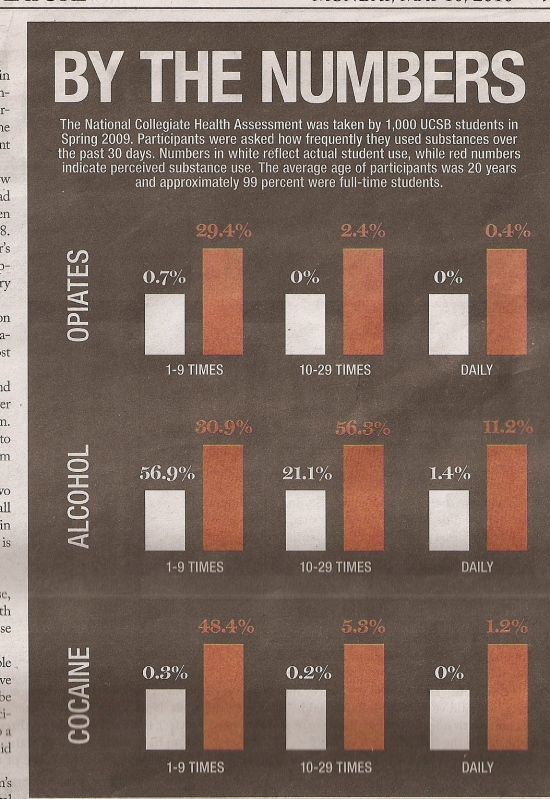 But, if we can get past the poor graphic, then the information is really interesting.  In all but one case, the number of people reporting drug and alcohol use is smaller than the perceptions of how many people are using these substances.  For example, looking at the middle column, (almost) no one reports using opiates or cocaine 10-29 times last month, but students perceive  that 2.4% and 5.3% of the population (respectively) are; similarly, 21.1% of students report drinking alcohol 10-29 times last month, but they perceive that over half the population is drinking that frequently.

This pattern is consistently true in all cases except for the percentage of people who drank alcohol 1-9 times in the last month.  The majority of respondents who drink reported that they did so at that rate, but they perceive that others are drinking far more than they are.  The overall impact of the illustration, then, is correct.  On the whole, students perceive more drug and alcohol use than they report.

It’s possible that people are underreporting and their perceptions are more true than the self-reports.  If their self-reports are more true, however, than we have a case of pluralistic ignorance.  In this case, students agree that the rate of drug and alcohol use is higher than it actually is.  They may, then, feel pressure to drink and do drugs more frequently to fit in, even as doing so results in just the opposite.

Why would a person self-report an illegal activity?

Confidentiality agreement maybe.
When you participate in studies, generally the only time your signature or anything traceable appears is on the participant agreement form and then from then on you are just another number.
There is no hard evidence to incriminate the participants by anyway.

I would have expected the numbers for regular / daily opiate use to be higher, given how many people (even college-age people) are prescribed painkillers for chronic health conditions.

Meera, the survey probably specifically states recreational use, as is common . With that caveat, people who used their prescription drugs recreationally might be able to call their use legal. People who used their prescriptions properly would not have to report at all. (And good thing too, because that data would be uninformative for the study.)
I tried, but I can't get past the bad graphic. Good god, why would they do it that way?

I go to Rutgers New Brunswick and my friend told me that the Sexual Health department has a statistic that says that 40% of Rutgers students are virgins, but when I try to tell people this they don't believe me. Then I point out that at least 1/2 my friends at Rutgers are virgins or have had sex with only 1 person. In fact, when I'm home and discussing how often kids drink or have sex, my friends are incredulous when I tell them how little my friends and I do because of Rutgers reputation. Granted there is a LOT of drinking, but at least sex wise there's not a whole lot going on when compared to what people THINK is happening.

I think some caution should be used when interpreting these results. We don't actually know that people are self reporting accurately.

I have seen surveys that show the people underestimate how much time they spend watching TV. It doesn't seem that impossible that people might also underestimate how often they drink. And then once we add int he some people might be embarrassed to tell the truth about embarrassing or illegal activities, we might get significant under reporting of the activity.

What do the red numbers even mean?

(I assume for the white numbers, the students were asked whether they themselves used the drugs 1-9, 10-29, or daily and the numbers simply reflect the percentages who responded with each. What questions were asked to produce the red numbers and how were the red numbers computed from the responses?)

This is not an example of pluralistic ignorance. Pluralistic ignorance refers to situations where a group follows a norm even though individual members do not individually subscribe to it, but think everyone else does. It does not refer just to a large swath of a population misunderstanding reality.

Having worked as a college health educator for over 14 years, I can attest to the massive misperception that exists about other student's behavior, especially around alcohol and drugs. Research has proved it time and time again, so this study is not a weird outlier. This data is accurate (though I agree very very poorly represented) in terms of representing that disparity.

In a nutshell, if an individual believes others are doing more of a particular activity (in this case, alcohol and drugs) than the individual is, the more likely they are to believe that is the typical behavior or socially accepted behavior...which means in turn they are more likely to increase their own use to fit their own perception of the norm.

The reason the data is being shared this way -- pointing out the disparity -- is based on a whole body of research about the impact of correcting the rampant misperceptions about these norms. The National Social Norms Resource Institute at University of Virginia has oodles of resources on this field.

Why would anyone even think to make graphs like that? I don't understand how it would even occur to someone, let alone make it through stages of editing such that it could be published. Is this a student newspaper?

I mean, I understand that you wouldn't necessarily want to put them all on the same axes, because the scale is going to be so different, but given that each category and each substance has it's own little graph, why would you not make each red and white counterpart mean something? If it doesn't mean anything, why is it there?

You could just write out the percentages in a list and have the same effect. You could make it pretty (and more informative) by having red and white pictures of drugs. Something that looks like it should be a graph but is actually just a picture is far worse than just useless.

THis type of info is actually the basis for interventions. Some campuses have done this with anyone caught getting in alcohol-realted trouble: they inyterview the person about their alcohol use (drinks/day, drinks/wk, binges), then they plot the reported use on a graph with actual use. THey mail this to the college kid.

in follow-up analyses, they find that the colelge kids who receivbe this accurate normative info drink fewer drinks per week, and have fewer binges.

That is absolutely one of the worst graphics I've ever seen.
They didn't even TRY to make the graph match the numbers--just copy/pasted the whole thing.

That was a great and informative article! Thanks for sharing this information. Truly, I can say so much alcohol ruins my life and I'm looking for the right drug and alcohol treatment centers that can help me.

[...] shows that most college students misperceive their peers’ behaviors and attitudes. They think drug and alcohol use is higher than it is and that their peers are less concerned about it than they are. They also tend to think [...]

[...] shows that most college students misperceive their peers’ behaviors and attitudes. They think drug and alcohol use is higher than it is and that their peers are less concerned about it than they are. They also tend to think that [...]