An emerging controversy in Canada is a good example of just how difficult it is to be racially-neutral when the context is racially-charged.  The country recently redesigned its money.  On the back of the $100 dollar bill celebrating medical innovation they sketched an Asian-appearing woman looking into a microscope.  In a focus group in Quebec, people complained that the bill reproduced the stereotype that Asians pursue careers in science and medicine.  The Vancouver Sun reports:

“Some have concerns that the researcher appears to be Asian,” says a 2009 report commissioned by the bank from The Strategic Counsel… “Some believe that it presents a stereotype of Asians excelling in technology and/or the sciences. Others feel that an Asian should not be the only ethnicity represented on the banknotes. Other ethnicities should also be shown.”

A few even said the yellow-brown colour of the $100 banknote reinforced the perception the woman was Asian, and “racialized” the note.

The Canadian government responded that they had never intended the woman to appear “ethnic” and ordered the image re-sketched so it would be more racially “neutral.” 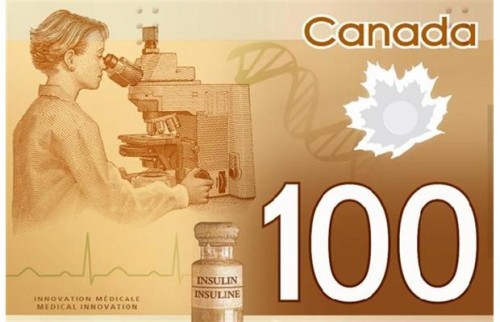 They were then accused of being prejudiced again. Mu-Qing Huang, a Chinese-Canadian interviewed for the story, objected to the deletion of the figure’s Asian features:

If Canada is truly multicultural and thinks that all cultural groups are equal, then any visible minority should be good enough to represent a country, including (someone with) Asian features.

This is a tricky problem.  By including racial or ethnic minorities on their bills, Canada risks reproducing a stereotype.  Including all “neutral” figures can be seen as exclusionary because neutral looks suspiciously like White people in a country dominated by White people.  The third option is to deliberately break stereotypes by putting, say, an Asian woman running the hurdles and a Black woman looking through a microscope, but this can seem overly contrived (as many attempts at diversity do).

The truth is that all of Canada’s options can be read in racially-charged ways.  This isn’t because people are unfairly reading into the sketches, it’s because life in Canada is, in fact, racially-charged.  When race matters, it matters, all claims to colorblindness aside.

Thanks to Craig G., Tom Megginson, Jesse, Helen, and Alex, an MLIS from McGill, for the submission!

She doesn't look Asian to me. And "yellow" color = Asian? I guess u.s. currency promotes Martians.

A possible solution would be to put a real Canadian scientist's face on the bill.

On a more pressing note, our new polymer 100- and 50-dollar bills are melting in people's vehicles, in vendor tills, and in my bluejeans.

I don't know if I would describe life in Canada as "racially-charged". To me this description implies that race (and by extension racism) are serious issues in Canada and I don't believe this true. As a nation which values multiculturalism, Canada does encounter issues of culture clash and national identity. Perhaps this is what is meant as "racially-charged"?

Also, It's interesting to me that the focus group was in Quebec, as the culture in Quebec is quite different from the culture in other parts of Canada. In general, the province of Quebec values the preservation of Canadian -more specifically French Canadian- culture, far more than the rest of Canada; thus they have greater concerns about immigration and the creation of a multicultural nation, which they fear will overpower their unique culture. I'm curious as to wether or not focus groups in other parts of the country had similar opinions.

Ans now we see why the dominant white culture doesn't want to talk about race. They get yelled at no matter what.

Of course, they deserve it!

"This is a tricky problem."  It is only tricky if you have populace obsessed with political correctness. It would have been best for the government to say to the complainers, "Whatever" and get on with business. Who cares if a very small sub-group of people complain?

Or.... they could go with a non-white ethnicity not stereotypically associated with the sciences.

The intended consequences of "multiculturalism"?

I don't like how this article is somehow justifying the stupidity of this. The "third option," that would be contrived. .. really? give me a break. You think Asian athletes and black scientists don't exist? Did you watch the olympics? Have you gone to any big cities in Canada? They should have just left the asian-looking woman or put another racialized minority as the image. If you want to be inclusive, then be inclusive. . . no immigrant or racialized person in Canada thinks that "neutral" is white - something they will never be and will constantly face the racist repercussions of.

Why couldn't they do like they do for the loonie? Release a bunch of them with a bunch of different scientists. It would show how awesome we are that anyone can be a scientist.

Just go back to flora and fauna.

Anyone think she might be squinting into the microscope?

There's always a lot of back talk when Canadians try to explain that the racial climate in Canada is different than the states. "Oh so theres noooo racism in Canada it's a magical place where everyone lives together in harmony?" No, what we're trying to say is its different. Americans are constantly portraying us as a country with no separate culture or political climate, they want to sit around and say we have exactly the same issues so that they have a partner in crime. Sorry guys, but we have our own issues. On that note I'd like you to find me 3 Canadians who would apply the term "racially charged" to our society of their own accord.

I can't help wondering that if no one pointed this out, it wouldn't have been a big deal. Basically it's only a racial matter because a small group of people (who supposedly represent the opinions of all Canadian citizens) made it a racial matter. The original design would have been put out and people would have accepted it. It seems like the focus group saw something that was not there (which brings to mind previous design controversies such as people seeing the American flag on a bill and seeing something sexual). Considering that the original design has not been released, we will never confirm if there ever was an Asian woman in the first place.

A Very Important Issue, OR Something That Follows Me From Country to Country « diametrically — October 27, 2012

First of all,I think the perception that the woman in the picture is asian has more to do with the particular viewers own prejudices than they do with the actual image;if you want to think she's asian,you'll see an asian.Personally,she doesn't look asian to me.What actually irritates me is the issue of not acknowleging the discoverers of insulin;it was two men,doctors Banting and Best,who discovered insulin.Why aren't they being credited for this?They credited the Canadian Suffragettes for their achievements,in spite of the fact that some of these women held some very offensive opinions,so why no mention of either Banting or Best?