In Ditmas Park, Brooklyn, they are dedicated to the development of a multicultural population. 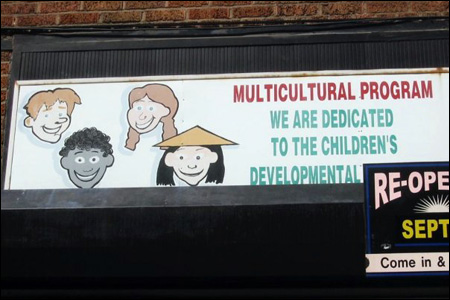 First, as Angry Asian Man asks, why is the Asian child in a rice paddy hat?  This anachronistic representation reminds me of what we do to American Indians all the time.

Second, the sign reminds me of the pitfalls of using euphemisms. What do they really mean when they say “multicultural”? They probably actually mean multiracial, but they don’t want to use a word with such harsh connotations (in the U.S.).  So instead they use the word culture because it sounds nice and is often imagined to be restricted to things like language, food, clothes, and dancing (as opposed to inequality, oppression, and exploitation).

If they actually meant multicultural, then maybe the hat actually kind of makes sense!  But I think they mean multiracial. In which case, see point #1.

Even if they meant multiracial, what race are they trying to represent with the gray kid? The undead?

Still laughing at Alyssa's comment...
On the more serious note, if they really did mean multicultural, then why aren't the other kids wearing items of clothing that represents their cultures?

If you look at the image, it's clear that the Asian girl is wearing a rice paddy hat because they didn't want to give her typically Asian slant eyes. So they substituted one stereotype for another.

"Multicultural" language is laid on thickly here in Canada --
which tends to be a farce around here. (We're not really such a 'mosaic' or a 'tossed salad'; yeah right.)

But standard notions of 'races' are a crock, of course (as this post indicates, for instance - http://thesocietypages.org/socimages/2008/09/18/a-simple-lesson-on-the-social-construction-of-race/ ). It seems like people tend to consider "racial" categories to be biological rather than -- or, at least, more so than -- social.

Yesterday we were driving along when we saw some of those ride-along advertisements. You know the type - guy on a scooter with a trailer. Trailer has a sign on it advertising whatever.

Except this was for an asian chain restaraunt. Instead of a scooter it was bicycles, and the riders had those triangle hats over their helmets.

Everyone else thought it was hilarious. I was trying to see what it was advertising so I could write a letter of complaint.

Nope, they probably mean multicultural--it was a big focus in Ditmas Park schools in the 1990s, maybe still is; check this 1998 article from the NY Times:
http://www.nytimes.com/1998/07/05/realestate/if-you-re-thinking-living-ditmas-park-brooklyn-suburban-enclave-urban-setting.html?pagewanted=all

"The cultures of Ditmas Park are reflected in programs at local schools. P.S. 139, with 1,620 students in pre-K through grade 5, is ''a multi-ethnic school focusing on understanding the diversity of our children,'' according to its principal, Ivy A. Sherman.

The Brotherhood Institute minischool within P.S. 139 ''focuses on the diverse cultures that make up our school,'' said Mrs. Sherman, whose own daughter will be attending classes at the school next year. Last year, 63.8 percent of third-grade pupils were reading at or above state minimum levels.

P.S. 152, with 1,615 students, also emphasizes multicultural programs and has minischools for the arts and for sciences and technology. Last year, 72.6 percent of third-grade students read at or above the state minimum, up 13 percentage points from two years earlier.

THE principal of P.S. 217, Mary Buckley Teatum, refers to the school as a ''mini-United Nations.'' It has 1,146 students of over 30 nationalities in pre-K through grade 5 and special programs in art and music, computers and physical education; 77.8 percent of third-grade students were at or above minimum state levels in reading.

I.S. 62, the Ditmas School, where 1,400 students are enrolled in grades 6 through 8, has a Russian bilingual program and four ''institutes of choice'' including one for performing and visual arts. Last year, 79.9 percent of 8th-grade students were reading at or above the state minimum standard, slightly lower than the city average."

The signage is certainly ill-conceived, but it's also almost certainly an amateur job--doesn't look like something that went through a design committee or any much discussion.

I think the problems here stem from the low skill levels of the illustrator. The faces aren't distinct in any way - remove the coloring from the "black" child and he'd look the same as everyone else. The two white children have slightly more individual noses, but that's it.

Volunteer: "Sure, I can draw some kids."
(Draws disembodied heads of children)
Program overseer: "Is that three white children and one black kid?"
Volunteer: "The one in the lower right is supposed to be of Asian descent... but I didn't want to give her slanty eyes, because that's racist."
Program overseer: "Right, right. Well... give her one of those Asian hats. We don't want people to think our idea of multicultural is all white people and one black kid."
Volunteer: "Um, okay..."

It's interesting to me that there are two white/Caucasian children, a boy and a girl, but only one African-American and Asian-American (male and female, respectively) and no Latin@ children ... or anyone else, really.

Why is an Asian wearing a paddy hat "anachronistic"? I live in Asia, travel all over Asia, and (a) there's a lot of rice farming almost everywhere you go and (b) most rice farmers wear paddy hats.

Perhaps "class-ist" is the more appropriate term (for assuming that the Asian kid is a poor farmer and not the urban elite).