The “Man Aisle” and Men’s Leisure

Steve Grimes, a once guest blogger who will be starting a sociology PhD program at Rutgers this fall, asked us to comment on the new “man aisle” in a grocery story in one of my old haunts, the Upper West Side of Manhattan.

The New York Post reports that the store COO and CEO conceived of the idea after reading a study showing that 31% of men now shop for their families, compared to 14% in the 1980s.  Ironically, the man aisle they designed doesn’t suggest that men are productive and useful members of their families. Instead, it reinforces the notion that men are all about leisure.  The items sold — you already know what they are — include condoms, Ramen noodles, beer, snack foods, and a surprising amount of condiments. 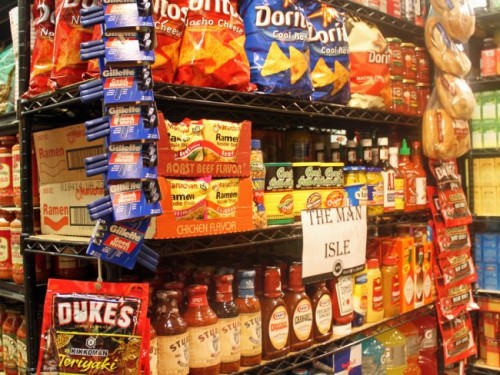 Because women are as likely to work for pay as men are, but continue to be held more responsible for housework and childcare, men do, in fact, enjoy more leisure time than women (in the U.S., almost 40 extra minutes a day).  Media frequently portray women as responsible for families or hard-working careerists and men as eager for nothing but a good time.  We see it in “for him” and “for her” news items and contrasting magazine content, and this idea is part of the message of the man aisle too.

Nothing about the man aisle suggests that he’s buying for anyone but himself, except insofar as  he might be stocking a man cave for his man friends.  This is unfortunate, because many men are productive and useful members of their families.  Also, some men hate beer, are allergic to wheat, are on diets, and think beef jerky is gross.  These men are invisible here too.

Meanwhile, the very presence of a single aisle for men marks the rest of the grocery store — the toilet paper, the diapers, the cleaning products, the greeting card aisle (*shudder*), the baking supplies, and the healthy food that you have to cook — as for women.

And they couldn't even spell "aisle" correctly.  @.@

I find it interesting that there is an enormous amount of BBQ sauce, but no substantial food to put it on.  The "man food" stereotype I'm more used to is men needing to GRILL MEAT (cooking it in the oven/on the stove is for ladies) regardless of the practicality.  But this aisle doesn't even acknowledge that a man might take control of his own meals for more than 5 minutes, regardless of how stereotypically manly.  What, are they lumping all that steak sauce on the beef jerky?

Something funny: while snack food is often cast in a "manly" light, reduced fat, baked, and other faux-healthy snacks are marketed almost explicitly at women.  And yet, there is a row of "healthy" Baked Doritos right next to all the "man food."

With all that junk food, they're at least going to have to venture out to the pharmacy aisle for some antacids.

They could have called it the "slob aisle" instead, so as not to insult the many men who don't fit this stereotype.

"Nothing about the man aisle suggests that he’s buying for anyone but himself, except insofar as  he might be stocking a man cave for his man friends."

This is all marketing, of course.  So what do "men" buy when they go to the store?  What, if there without their wife or family, would they be more likely to purchase because they want to.  That's what this is.  This isn't simply brining all the things that men usually buy into one row to make it easy on them, it's there to make them buy things they wouldn't have bought otherwise.  They have a list, written or not, of what they need.  Now when they go down this row, like the candle on the low shelves by the checkout stand for kids or the magazines at adult-high-level (next to chapstick) for women, they will impulse buy things they wouldn't have otherwise bought.

There is absolutely nothing wrong with this.

Feminists get accused of hating and belittling men yet it's not feminists insulting men with things like this "man isle" promoting the idea of men as irresponsible children only interested in sports, beer and sex. It's the people heavily invested in rigid gender roles, this especially applies to lazy marketers because it makes their lives easier if they can put everything in tidy boxes like "for men" and "for women".

Because nothing says "MAN" more than a ramen and doritos sandwich slathered in BBQ sauce, eaten whilst shaving.

I think part of the (lack of) logic here is that women are not supposed
to buy fries and sauce, because it's mandatory for them to watch their figure . The underlying message is that being a leisurely couch-potatoe is man's only prerogative. How much do you want to bet a "Woman isle" would have nothing
but a bunch of tasteless diet products? So yes: insulting, discriminating,
body-shaming and condescending.

Strangely enough, the "man aisle" is almost identical to the American section of the "international aisle" of many European supermarkets.