Food shortages during World War II required citizens and governments to get creative, changing the gastronomical landscape in surprising ways.   Many ingredients that the British were accustomed to were unavailable.  Enter the carrot.

According to my new favorite museum, the Carrot Museum, carrots were plentiful, but the English weren’t very familiar with the root.  Wrote the New York Times in 1942: “England has a goodly store of carrots. But carrots are not the staple items of the average English diet. The problem…is to sell the carrots to the English public.”

So the British government embarked on a propaganda campaign designed to increase dependence on carrots.  It linked carrot consumption to patriotism, disseminated recipes, and made bold claims about the carrot’s ability to improve your eyesight (useful considering they were often in blackout conditions). 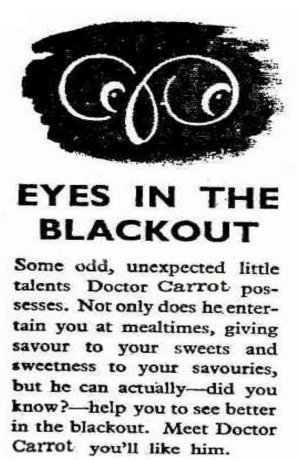 Here’s a recipe for Carrot Fudge:

Put the carrots in a pan and cook them gently in just enough water to keep them covered, for ten minutes. Add a little orange essence, or orange squash to flavour the carrot. Melt a leaf of gelatine and add it to the mixture. Cook the mixture again for a few minutes, stirring all the time. Spoon it into a flat dish and leave it to set in a cool place for several hours. When the “fudge” feels firm, cut it into chunks and get eating!

Disney created characters in an effort to help:

The government even used carrots as part of an effort to misinform their enemies:

…Britain’s Air Ministry spread the word that a diet of carrots helped pilots see Nazi bombers attacking at night. That was a lie intended to cover the real matter of what was underpinning the Royal Air Force’s successes: the latest, highly efficient on board,  Airborne Interception Radar, also known as AI.

When the Luftwaffe’s bombing assault switched to night raids after the unsuccessful daylight campaign, British Intelligence didn’t want the Germans to find out about the superior new technology helping protect the nation, so they created a rumour to afford a somewhat plausible-sounding explanation for the sudden increase in bombers being shot down… The Royal Air Force bragged that the great accuracy of British fighter pilots at night was a result of them being fed enormous quantities of carrots and the Germans bought it because their folk wisdom included the same myth.

But here’s the most fascinating part.

It turns out that, exactly because of the rationing, British people of all classes ate healthier.

…many poor people had been too poor to feed themselves properly, but with virtually no unemployment and the introduction of rationing, with its fixed prices, they ate better than in the past.

Meanwhile, among the better off, rationing reduced the intake of unhealthy foods.  There were very few sweets available and people ate more vegetables and fewer fatty foods.  As a result “…infant mortality declined and life expectancy increased.”

To close, here are some kids eating carrots on a stick: 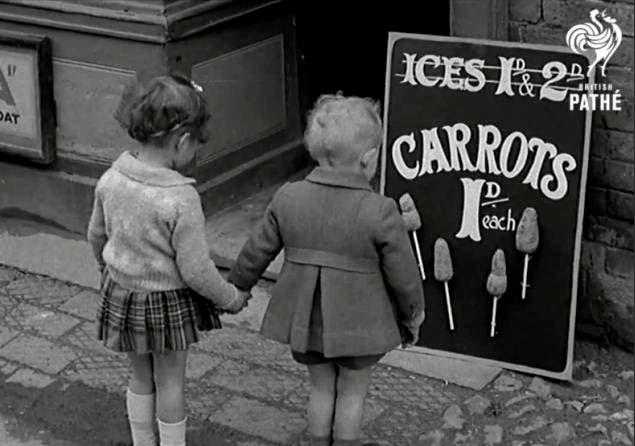 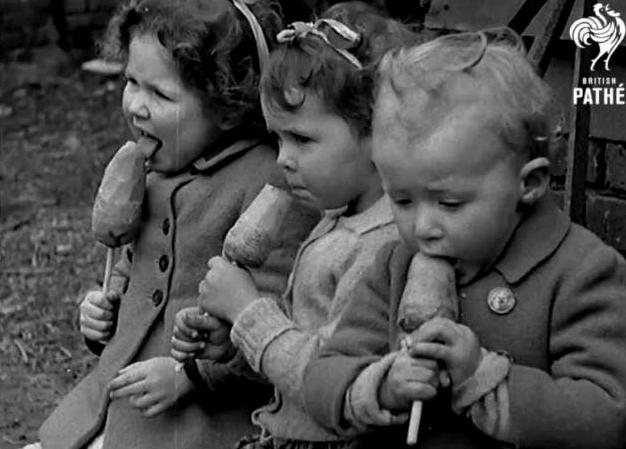 Via Retronaut.  For more on life during World War II, see our posts on staying off the phones and carpool propaganda (“When You Ride ALONE, You Ride With Hitler!”) and our coverage of life in Japanese Internment Camps, women in high-tech jobs, the demonization of prostitutes, and the German love/hate relationship with jazz.

The Carrot Cake introduced at that time remains popular here to this date.

Carrots really are sweet - in fact veterinarians suggest limiting the number fed to pet rabbits due to the amount they contain.

I'm hugely skeptical of claims that rationing in itself improved people's diets. Price controls undoubtedly helped the poor, but a decline in infant mortality (and I'm wondering what the actual numbers are) is probably more attributable to the better availability of health care and, if child mortality is being counted, to the distribution of foods like milk and orange juice to school children during the war years. British rations in fact allowed more sugar than just about anything else (numbers changed, but typical rations for a single person could include 8 ounces of sugar per week versus 1 egg, 2-3 pints of milk, and a few ounces of meat. Vegetables were *not* plentiful because there was much less farm labor available, and many people, especialy the urban poor and working class, would not have had the possibility of growing vegetables for themselves.

What's really interesting to me is the way rationing, which at the time was experienced as miserable deprivation and at times actual hunger, is now, in the context of the current moral panic over fat, being reimagined as proper healthful eating.

"The problem…is to sell the carrots to the English public."

I thought that in Great Britain during World War 2 the most effective way to encourage the British population to do something while appealing to their patriotic feelings was to show the King and Queen engaging in it. Perhaps there are publicity pictures from that era floating around showing them eating carrots?

I'm just wondering why they put the carrots on sticks.  They're not like popsicles or corn dogs that will either melt or burn your hands.  Did they do it to convince the kids they were an acceptable replacement for ice cream?