Symbolic Consequences of the New Definition of “Forcible Rape” 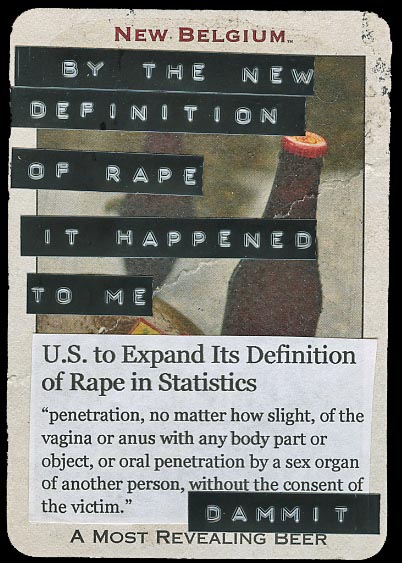 The more inclusive definition is a net good, I believe.  Legally, it’s best that we have the tools to prosecute these crimes and, for some people, being able to use this word to describe something terrible that happened to them will be validating and empowering.  For others, however, it may heighten the trauma. “Rape” is a powerful word and many Americans imagine it to be among the most harmful of crimes.  Like child abuse, but unlike even very violent non-sexual physical assaults, rape is often believed to be a long-lasting harm, maybe even one that you can never truly recover from.

Perhaps the word “dammit” in the card is meant to convey exactly this sentiment.  It was easier, perhaps, to think it was a bad night.  Now, though nothing has changed except for the language, the victim has to contend with having been raped.

Of course, it still leaves out the possibility of men being raped by women. :(

Maybe with this new definition people will stop thinking of rape as a "women's issue", even though more rapes in the USA have male victims than female victims.

And before anyone asks for a source:

Human Rights Watch (http://www.hrw.org/legacy/repo...estimates that 100,000–140,000 "violent" male-male rapes occur in U.S. prisons annually; compared with FBI statistics (http://www2.fbi.gov/ucr/cius20... that estimated 90,000 violent male-female rapes occur annually (using the old female only definition, obviously, as the numbers with the new definition have not been released yet).
If "violent" rape is too narrow a definition for your tastes (as plenty of rape and coerced sexual assault gets left out) then consider that according to RAINN (http://www.rainn.org/statistic... there are just under 208,000 victims of sexual assault per year (as per how they gather their statistics, this does not include people currently in prison), while the justice department predicts that there are 216,000 victims of sexual assault (not instances, but victims who are usually assaulted repeatedly) in the prison system (http://nplusonemag.com/raise-t.... Neither of these statistics speak to gender directly, but RAINN states that 9/10 victims of sexual assault (outside the prison population) are female, while the US prison population is 94% male, so the slight increase for male victims over female seem consistent with the violent rape figures.
It might be common knowledge that prison rapes in the USA are rampant, but few people realize they outnumber all other rapes outside of prison.

Positing rape only as a life-threatening crime of violence leaves out the experiences of a lot of women, myself included. I don't tell people I was raped, not because it didn't affect me, but because I don't want people to hold my hand and tell me how sorry they are, and how traumatized-for-life and sexually dysfunctional I must be now. I experienced the act as much more about sex than power. From a structural standpoint, of course it's about power. Sometimes rape is a life-threatening crime of violence, but it isn't always. Some women's experiences are gruesome, violent, or severely traumatizing, but not all are. I don't like being called a "survivor" or a "victim," but not everyone feels that way. There is no singular experience, and I often think we do a disservice by acting like there is one. Expanding the definition of rape should make me feel like it's a step in the right direction, but I understand completely why the PostSecret author said, "Dammit."

it really astounds and kind of disheartens me that, even on this website, which i would hope to be a safe space, there are scads of people who are uneducated about--or directly reject-- pretty much indisputable facts or at least long-held tenets about gender politics, women's issues, race relations, and pretty much any other social issue one might read about here.

for some reason, many commenters here will flippantly toss out that this is a "teaching website," so if they don't understand a post, other commenters should be required to explain it and educate them, but using that phrase just illustrates my point: yes,this is a teaching website; if you read it, you most likely do not hold a high degree in sociology and are here for your own enrichment because you want to learn. you don't have the credentials to dispute what is said on the topics unless there is a glaring factual error.

moreover, none who read the posts on this website are obligated to teach you and enlighten you as to their personal experiences. this is a "teaching website" in that the posts themselves are supposed to be educational, and any other research you would care to do should be done by yourself, not demanded of strangers on the internet.

disputing examples of well-known social phenomena is infuriating, but it is also fruitless; and demanding that others use their time to educate you, and their lives as "teaching moments" is arrogant and ridiculous. frankly, i've become extremely fed-up with the boorish behavior of many people who deem themselves fit to be part of the community of readers here. on another note, i would like to add that when the discourse here is constructive and coherent, i feel honored to be part of such a group of commenters.

Just think it needs to be pointed out that the definition of rape as penetration is still extremely narrow and will exclude most kinds of unwanted sexual stimulation or contact.

I don't think it's the LANGUAGE that caused the person who made this card to have to contend with being raped. I think it was BEING RAPED that caused that.

You are aware that this is an ACCURATE definition of rape, are you not? And that many rape survivors do not immediately label their experiences rape -- regardless of legal or other definitions -- yet suffer trauma nonetheless? That being unable to name their experiences is often a part of that trauma, and can exacerbate it? That being given opportunities to call it what it is can be part of the healing process, that naming the trauma can be an act of survival?

To be clear, I have nothing against the creator of this card or its message. For sure, coming to grips with the reality of one's traumatic experiences is uncomfortable at best and, I imagine, can even be re-traumatizing. But to blame language for that trauma, especially truthful language that is a huge  step in the direction of helping survivors and making our society more aware and less tolerant of rape, is an appallingly insensitive, shallow, and flippant take on this piece. For a sociological expert, it is just poor analysis.

Survivor advocacy groups have been fighting for years to get the justice system and society at large to recognize that there is no "correct" way to experience rape. This new definition goes a tiny way towards making that sea change happen; the correct response to any small change towards inclusivity is a resounding "FUCK YEAH," not an op-ed on what someone might have meant when they wrote a Postsecret submission. How dare you use their words to pontificate on whether or not calling rape "rape" is good for people who have been raped?

In addition, Dr. Wade, if you're going to write about the effect of the new language on survivors' ability to process rape, it's essential that you make sure survivors themselves have a voice.

[...] is difficult to measure, partly because of limiting state definitions, but the numbers are consistent enough from different sources to support the conclusion [...]

[...] ridiculous, as I’ll show. Rape is difficult to measure, partly because of limiting state definitions, but the numbers are consistent enough from different sources to support the conclusion that [...]

[…] ridiculous, as I’ll show. Rape is difficult to measure, partly because of limiting state definitions, but the numbers are consistent enough from different sources to support the conclusion that […]