This is Part IV, see also:

2012: LEGO Friends and the Ensuing Backlash 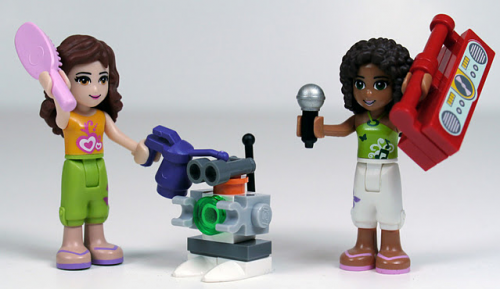 In Parts I through III, I’ve discussed the history of LEGO’s attempts to capture (or abandon) the imagination of girls and boys.  In this final installment, I discuss their newest effort to market to girls, LEGO Friends.

Several weeks before the first wave of LEGO Friends sets were available in U.S. retail stores, Bloomberg Businessweek ran a cover story that presented an in-depth look at TLG’s thought process in creating the sets. This was a very deliberate move on the part of TLG: it got their version of the story out there first (“four years of marketing research show this is what girls want”) and it made a bold statement about the LEGO brand (“like it or not, the minidoll is LEGO now”).

This move implies that they foresaw the backlash this line would inspire and hoped to mitigate it. The article portrays TLG sympathetically, as a company that wants to help girls build important skills and is trying to figure the most effective way to reach them. This idea is echoed in TLG’s official press release responding to the controversy. To a certain degree, this maneuver has been successful on TLG’s part. I have seen plenty of people point to the quote about “four years of marketing research” to dismiss the arguments that LEGO Friends perpetuates harmful gender stereotypes. But the attempt to integrate the minidoll into the LEGO brand is ultimately doomed.

In many ways, LEGO Friends is an improvement over the previous “girls only” themes. Even more so than Paradisa, for example, LEGO Friends has a building experience that is on par with other currently available LEGO sets (mostly City and Castle, as the action themes use more complex techniques.)

The interests/occupations of the female characters are just a little bit broader than previous lines. While Andrea and Emma have clear predecessors from Belville, Olivia the inventor, Sophie the Veterinarian, and Stephanie the farmer/pastry chef (?) broaden the range of possible careers just a little bit. 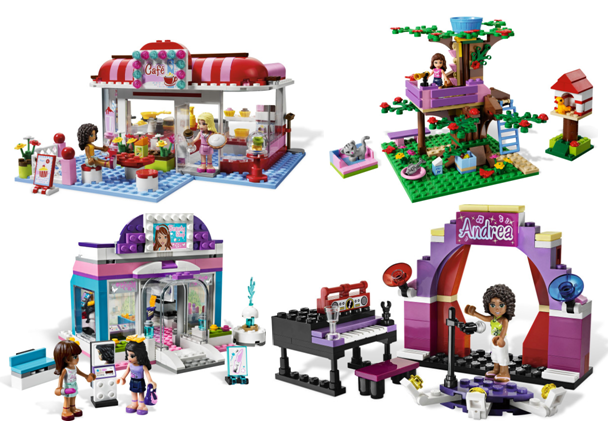 Despite the presence of a beauty salon and a fashion designer, the clothing options in Heartlake City are also very limited. There is only one pair of full length pants available and threes shirts with sleeves, everyone else has skirts or capri pants with tangtops and sleeveless blouses. Olivia will have to raid her dad’s wardrobe if she wants to make her laboratory OSHA compliant.

The minidolls may be the biggest barrier to efforts to use LEGO Friends as a gateway to the rest of the LEGO product.  In addition to being sexified and out-of-proportion to the classic minifig, their articulation makes them simply less interesting than the classic LEGO person.  The classic minifig has 7 points of articulation (8 if you count the hairpiece’s ability to move rotate independently of the head) whereas the minidoll only has 4 points (5 with the hair.) Minidolls can’t rotate their hands (which limits the ability to accurately pose accessories) or move their legs independently (which prevents them from being posed in active positions like running, they can only sit, stand or bend over).

The value of the LEGO system is the ability to connect all the different pieces to each other. The only compatibility between minidolls and minifigs is the hairpieces and accessories (think about the message that sends.) More, unlike the legs and torsos of minifigs, which easily connect to standard LEGO bricks so you can build any type of legs you want, the leg to torso connection on the minidoll is not compatible with any standard LEGO connection.  Additionally, the minidolls do not have LEGO connections on the back of their legs like minifigs do, making it impossible to securely attach to vehicles in seated positions.

To be fair, the minidoll has a slight advantage over the minifig in regards to racial diversity. Though darker skin tones were introduced to minifig in 2003 with Lando Calrissian, there has yet to be an identifiably feminine, dark-skinned minifig. Andrea (and Sarah) are therefore trailblazers. Friends is also the first instance of a LEGOLAND scale theme that integrates realistic flesh colors and is not connected to an external franchise (movies, comics, sports, etc.). This is a topic I’d like to discuss at length another time, but I hope this is the start of a trend that leads to a more ethnically diverse range of minifigures.

In sum, LEGO Friends is far from perfect, but it is a decided improvement over previously girly-LEGO iterations.  Still, many consumers object to the line vociferously, coining the clever slogan: “LEGO for girls already exist – it’s called LEGO.”

TLG seems to fundamentally misunderstand this argument. In a press release, for example, they explained:

We want to correct any misinterpretation that LEGO Friends is our only offering for girls. This is by no means the case. We know that many girls love to build and play with the wide variety of LEGO products already available.

This isn’t satisfying to detractors because the critique of Friends (as I understand it) is not that it is being presented as the only LEGO product line for girls, but that TLG is so clearly marketing LEGO Friends only to girls. Rather than creating themes that appeal to both boys and girls and marketing them to both boys and girls, TLG is creating products for boys and products for girls. The fact that the focus groups for LEGO friends consisted of girls and women and the focus groups for lines like Power Miners and Atlantis consisted primarily of young boys proves that TLG fundamentally believes that boys and girls have entirely separate needs and desires. This is a harmful belief that we as a culture need to rid ourselves of.

My bet is the confusion on that issue is a little bit intentional. As the only response they can give to the actual concern is that, yes, they think they need to market a girl product based on gender expectations.

Wait so boys and girls /don't/ have separate needs and desires?

What society are you living in, man?

Thank you for making the point that the building experience with Friends is on par with other LEGO offerings for the same age range. There are significant issues with the Friends line, but the repeated, seemingly erroneous refrain about dumbed down building has been frustrating. My biggest issues are centered on the Mini-doll being incompatable with other sets and the marketing that targets girls as "other" and boys as neutral.

I'm loving these Lego essays, very thought-provoking. However, I do wish that whomever posts these, would skim over for basic spelling errors.  When doing research online, I tend to take articles with spelling errors a little less seriously. E.G.  "capri pants with tangtops" "
threes shirts with sleeves"

This has been a great series. I enjoyed reading. I haven't seen these in toy stores (don't know the last time I was in one), but from the pictures, they seem incredibly similar to Playmobils, which makes me wonder if they're trying to create a new market for kids who like the size and dollhouse-y qualities of Playmobil (I think their accessories and themes are unmatched, since they span tons of folklore, careers, historical epochs, activities, etc, and they're also just really good quality pieces of plastic, and they don't really do a lot with figures, etc, so you don't have to worry about bad body image) but want to do a little more building...

For what it's worth, there are some racially diverse, non-franchise-based figures in the Duplo line. Not exactly the same as the minifig, but still nice to see, especially since Duplo is a likely starting point for Lego fans.

[...] Back in May, Lego unveiled Lego for Girls- to some controversy. The criticism stems from the female figurines’ figures, outfits, place of employment, and perhaps most insultingly the ease of construction of the sets. In the wake of this controversy there was a great four part series on the history of gendering in Lego, it is a neat read – part 1, 2, 3, and 4. [...]

Dear LEGO®, In Regards to Your Marketing-Imposed Sex Change For My Son! — October 30, 2013

Check this Lego Knock-Offs,hope it help you.