On the heels of our guest post describing the surprising rise in hypersexually-objectified women on the cover of Rolling Stone, comes troubling research out of cognitive neuroscience, sent in by Dolores R.

Mina Cikara and colleagues did a series of experiments — using Implicit Association and fMRI — to test whether sexist and non-sexist men’s cognition varied when looking at sexualized versus non-sexualized images of women. In fact, when men who tested high on a scale of sexism were shown images of sexualized women, they associated them more easily with words that implied an objectified “thing” than a thinking “person.” This was reflected in the fMRI study.

The take home message? When sexist men are exposed to strongly sexualized messages, they are inclined to dehumanize women, to see them as things.  Seeing someone as a thing is the first step towards treating her like her desires, thoughts, and preferences do not exist (because objects don’t think).  In other words, it facilitates sexual assault.

So… hmmmm… who to pick on here.  How about American Apparel…

American Apparel, this is brain poison (after the jump; NSFW): 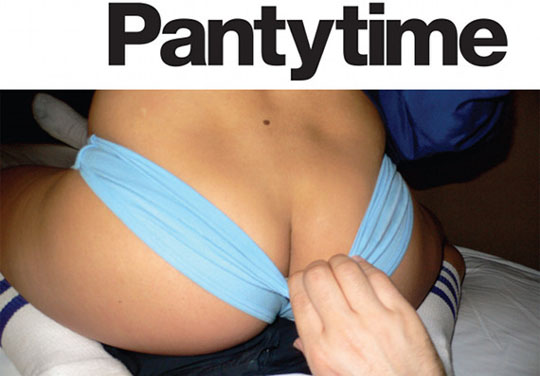 For more on American Apparel, see our post on leftist balkanization and the difference between modeling clothes and modeling one’s body.

Yes, and a major take-home is that the problem is not women's sexuality - *it's men's pre-existing sexism*. I make this point because I have seen someone try to use the results of this study to argue that women bring dehumanization on themselves by daring to be sexy in public (including wearing bathing suits on the beach, gasp!), thus forcing men to objectify them.

But as this article reiterates, that's very clearly not what the study says - only men scoring high on a measure of hostile sexism expressed the neurological indicators of not associating the sexy women pictures with being human. Other men were quite capable of seeing a lady in a bikini and not thinking of her as an object. (And, yes, they only used heterosexual men in these studies, although gay men are capable of being sexist too.)

Uh, you might not want to link to "more particularly egregious AA ads" through that particular blog, seeing as (presumably) he praises AA for those very ads. Just a thought...

Feminists have always argued for complete sexual liberation and the free expression of sexuality, a very good and healthy thing, but how can you prevent the ever increasing sexualization of women (and children) that is taking place in advertising and in society in general? What is the solution? What rules or regulations do you suggest?

On a sidenote: I couldn't finish (or even get through half) of the linked American Apparel ads. Too horrid. I was very disappointed to see Rachelle Lefevre featured- I love her. Shame that she did this.

Very interesting study, thanks. Since you linked the "Leftist Balkanization", though, I do have to comment even if it seem nitpicky: isn't it a little thoughtless to use that term when describing the Left's deliberate ommission to address certain issues? Perhaps this is more of a European thing, but "Balkanisation" carries with its so many xenophobic assumptions about the intrinsic fragmented nature of people from the Balkans, who are already Europe's convenient Other.

This seems quite bias. Sure, an aspect of male sexuality involves a degree of "objectification". What people don't seem to acknowledge is this occurs between gay men as well http://psycnet.apa.org/journals/men/10/3/225/ .

..and that the relationship between sexually open female images and perceived low status is complicated. May I suggest that the "letting down the sisterhood" narrative probably isn't helping.

I quote from the study: "...we would like to note that our findings applied only to the sexualized female targets; the HS-mentalizing network relationship did not emerge for clothed female targets, highlighting that these responses are unique to the combination of sexist male perceivers viewing sexualized targets."

This is quite interesting. It suggests that sexist men don't objectify clothed women, which would perhaps support the theory that some people have that a woman's clothing is a factor in whether she's likely to suffer sexual assault. However, it does also quite clearly show that this affect only takes place in men with pre-existing sexist views, which tends to suggest that it's the men who are at fault rather than the clothing.

Here's a comment from one of the participants in the study, and a criticism of reverse inference -- a term I recognize, interestingly enough, because I'm currently reading Delusions of Gender: How our Minds, Society, and Neurosexism Create Difference.

In the study's conclusion, it said that "these responses are unique to the
combination of sexist male perceivers viewing sexualized
targets." Instead of focusing on the catalyst of objectification, which leads to some sort of advocating for government censorship (whether it's a good idea or not), could an alternate takeaway of this study be "Non-sexist men don't objectify women even in hypersexualized contexts?" We should focus on raising our boys right. Only that way, can freedom of speech and lack of sexual guilt not have to be in opposition to respect for women and women's lack of sexual guilt.

I'm disappointed by this post; I thought the golden rule in social science was that correlation≠causation. The take home from the data, if generalized appropriately, is not that sexualized images facilitate sexual assault, but rather that sexist men on average will activate objectifying/dehumanizing schemata more often than non-sexist men when interpreting sexual imagery. That is a far cry from making the images themselves the cause even of dehumanization, as the most obvious mitigating factor would be the selection factor for the population under study itself (ie: one could easily explain the findings by saying that sexist people are more likely to view woman as objects in all contexts).

Besides that point, even if dehumanization/objectification and other ways of reducing one's empathy may be considered a prerequisite for sexual assault, the study only showed sexist men objectifying/dehumanizing abstract women with whom the only interaction was a sexualized image; it's not a logical conclusion to make based on the evidence provided by the study that they would similarly objectify/dehumanize a live human being in front of them, sexualized or otherwise.

It's one thing to talk about, think about, feel empathy towards or otherwise relate to someone who is corporeally inaccesible, for better or worse– one can point to, for example, the uniquely judgmental and indiscrete ways people talk about the personal lives of celebrities who they have never and will never meet.  That however, is fundamentally different from actual, direct, face-to-face interaction with other people. The difference between the images in the study and actual women is even more profound because the images of sexualized women are part of a text, one which in a misogynist society, is more often than not designed as an object of sexual gratification to be consumed by a presumed heterosexual male audience.

The real takeaway from the study may be important, but it is not quite as profound, nor nearly as sinister as you've made it out to be: Men who are sexist (as determined by their beliefs concerning women) are more likely to objectify of women presented in sexualized imagery. Anything beyond that is, in my opinion, conjecture.

Is treating people as objects really considered wrong, and mutually exclusive to treating them as thinking human beings?  Not to be too nit-picky, but I'm on the Kantian side of ethics here and feel that it's when we treat each other *merely* as objects that it becomes objectionable.  We can certainly use each other as a means to an end I would think, so long as there's a recognition of each other as ends unto themselves, right?

As other's pointed out, there is a great opportunity to increase the percentage of males who do NOT sexualize women.  In that way, we can increase safety while also avoiding an increase in censorship.

It would be wonderful if sexualized images didn't have a negative effect on anyone -- perhaps in those cases they wouldn't have a positive-sales effect for businesses, and they'd simply go away on their own.

[...] recent article highlighting the link between sexualized advertisements and objectification of women in real life [...]

[...] to learn more about the efficacy of such protests, and particularly how useful — or possibly counterproductive — they are in a feminist sense, I realized that “Bikini Girl” deserved a second look. [...]

[...] of your profile? You’ll probably never see him again. Secondly, men in U.S. culture are raised to objectify women as a matter of course, so an approving gaze doesn’t mean you’re unique or special. [...]

Didn't bother to read the article, too busy jerking off to the picture.

Yes I knew this was true before I clicked on this link. If women stop dressing like girly girls then sexism will stop.

Our Ladies of Action: What I Want From An All-Female Expendables And What I Really Don’t Want « The UnLady — November 17, 2012

So I guess when a woman sees a picture of a guy in his underwear or something she is thinking about how good of a listener he is or what his personality is like?

[...] thinks of your profile? You’ll probably never see him again. Secondly, men in U.S. culture are raised to objectify women as a matter of course, so an approving gaze doesn’t mean you’re unique or special. Thirdly, [...]

Um is it just me or does all this study prove is that sexist guys are sexist?

when men who tested high on a scale of sexism were shown images of
sexualized women, they associated them more easily with words that
implied an objectified “thing” than a thinking “person.”

And then you say that

"American Apparel, this is brain poison"

It seems you are implying a causal link when the study shows none.