We’ve been so busy with PETA, we’ve forgotten about American Apparel.  What does one have to do with the other?  They both sacrifice one social justice issue in pursuit of another.  I find this leftist balkanization–where lefty groups choose one and only one social justice issue and ignore the rest, or even exacerbate them–fascinating.  It leads to, if you will allow me to mix metaphors, a leftist cannibalization.  We are eating ourselves.

So anyway, American Apparel is American Apparel because they are supposed to care about fair wages.  You know, made in America according to fair labor laws.  Anti-sweatship and all that good stuff.  What a lovely thing.  Except… their ads (stolen from Copyranter).  They make me want to wash my eyes out with soap.

Um… not safe for work. 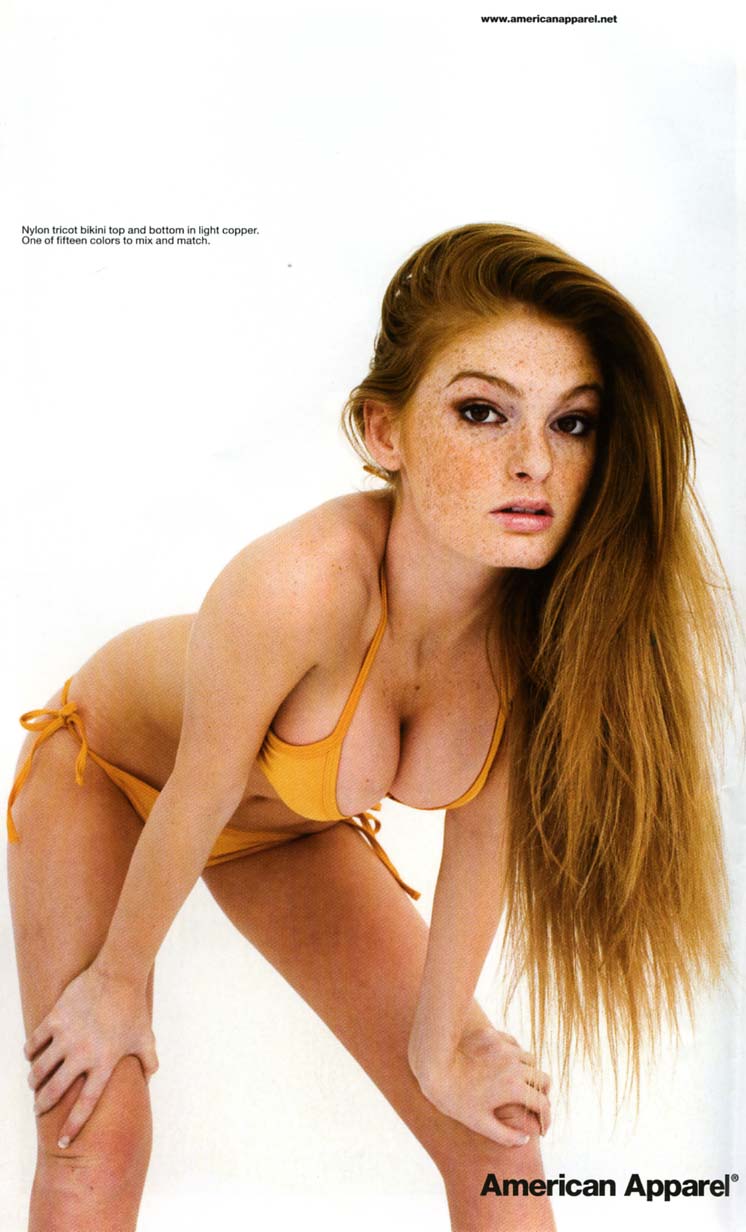 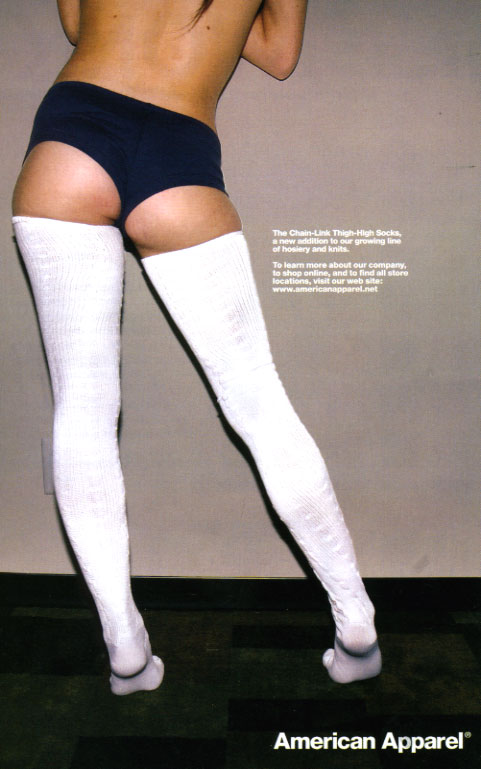 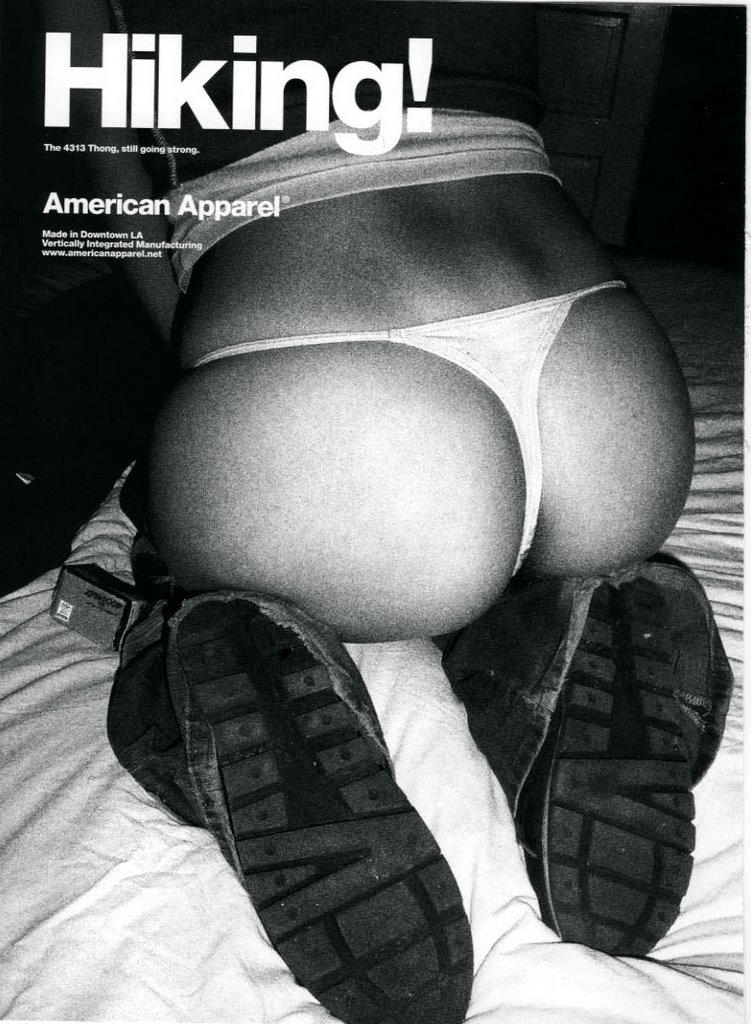 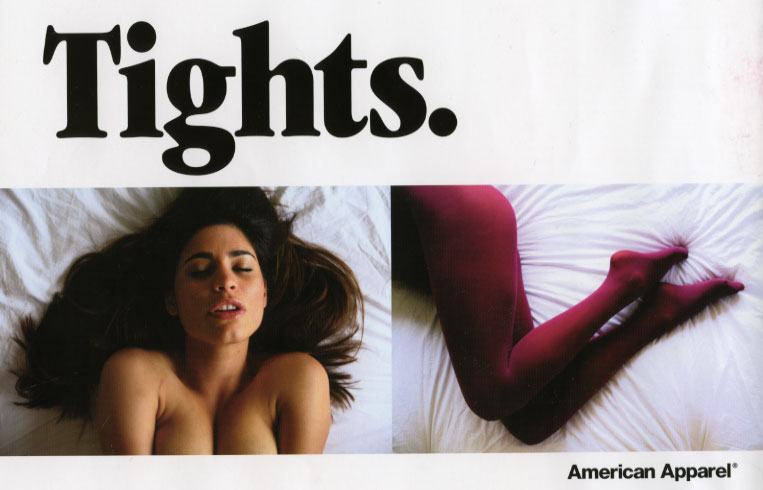 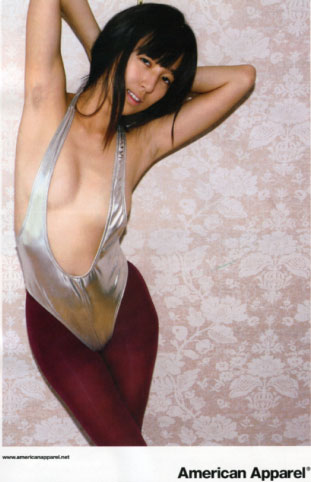 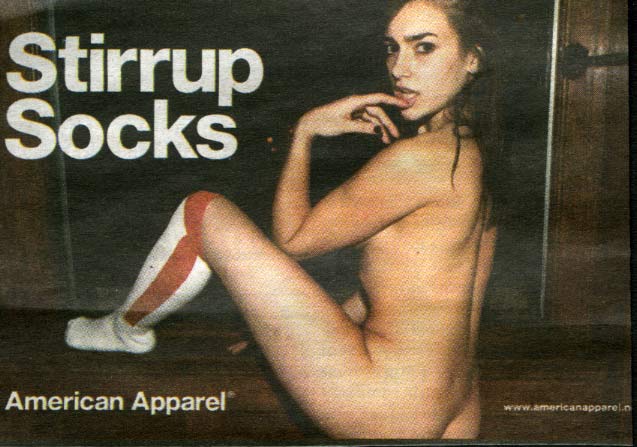 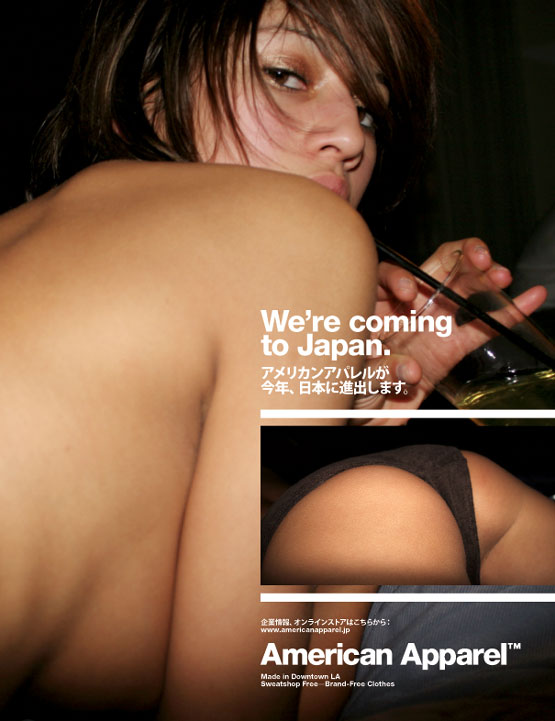 See also our post on the striking resemblance between their commercials and those old banned child-porn-esque Calvin Klein commercials.

On the other hand, they don't seem to be photoshopping the models into unreal proportions.

[...] might also see this post on the way in which lefty movements and companies tend to focus only on one axis of inequality at a [...]

[...] leftist causes tend to be narrowly focused such that they undermine other leftist causes (see here for my original post and here and here for two follow-ups).  Perhaps the opposite of such [...]

[...] Apparel ad banned I hate sweatshops. Now, which one of you wants to suck my dick? Leftist Balkanization This is sooo not at all pornographic, you puritanical [...]

[...] and change their behaviors. Leaving aside the appropriateness of the first point for now (see Lisa’s post on the problems with this logic)–caution, not safe for work), the other question is…are [...]

Thank you for re-reminding me why I will not buy their products!

Please leave Japan alone! Japan is centuries ahead of this crap with respect to healthy attitudes regarding human beauty and sensuality - All AMerican ideas do is fuck things up - Why not ask Barry Soetoro for his birth certificate? Do something constructive, after screwing up AMerican culture, your sights are on Japans. Hope the project fails miserably

[...] rights. So competition between these different causes – what one sociologist has called leftist balkanization – is ultimately going to hurt all of them, since it amounts to infighting among people who [...]

[...] rights. So competition between these different causes – what one sociologist has called leftist balkanization – is ultimately going to hurt all of them, since it amounts to infighting among people who [...]

Speaking of leftist Balkanization; as a heavier woman, I am so sick and tired of funky-import stores, or our-clothes-are-organic and eco-friendly clothes stores; because while the clothes they sell may be fairly traded, made by artisans by hand as a cottage industry in impoverished countries, organic and low-impact, they are even worse than clothes stores in general, in that only exercise-anorexic gym bunnies could wear them. There have been a couple of items of clothes in such stores that noone I can imagine could wear - because the only female I know with a torso circumference that small is my 9 year old niece - and she doesn't have anything to fill out the top of the dress.

I dont see how anyone can confuse either the animal "rights" agenda or the made in America agenda while at the least the clothing industry is cloaked (no pun intended) by the Advertising Industry standard which has always been Sex Sells
And how on earth can anyone over 30 still be a Liberal and speak of anything Leftist in intellectual terms. "Balkanization" cut me a break - that is akin to "gentrification" Call it what it is --- Growing old!!! Both the gentry and Liberals!!