Fraulion sent in this screenshot from the Amazon.com homepage.  In case you needed help buying gifts, dads like history and politics, moms like to smell nice and look shiny, girlfriends and wives like chick flicks and cute stuff, boyfriends and husbands like classic rock and knowing what time it is, grandpas like to watch documentaries (probably about “the war”), and grandmas just want to look at pictures of their grandchildren. 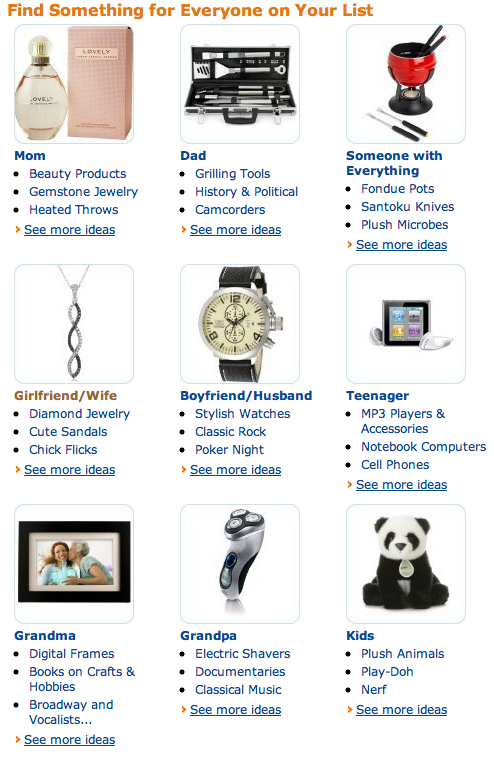 Last but not least, Rob W. sent in another Amazon.com gift guide that suggests that women want a masculine-looking watch and men want a wine aerator (I don’t know what that is, but wine is woman-y right?).  So… counter-stereotypical push back against the gender machine?  Or a typo?  I’m going with typo.  Funny typo. 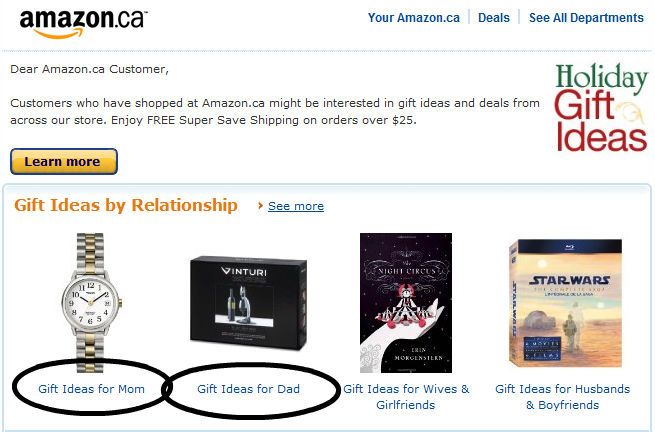 More after the jump:

Alex T. sent in pages from a toy catalog put out by the Australian superstore, Myer.  Judging by its pages, boys enjoy pretending to be scientists, engineers, and soldiers (or generally shooting things), whereas girls like to cook, cook, take care of babies, clean, and look pretty: 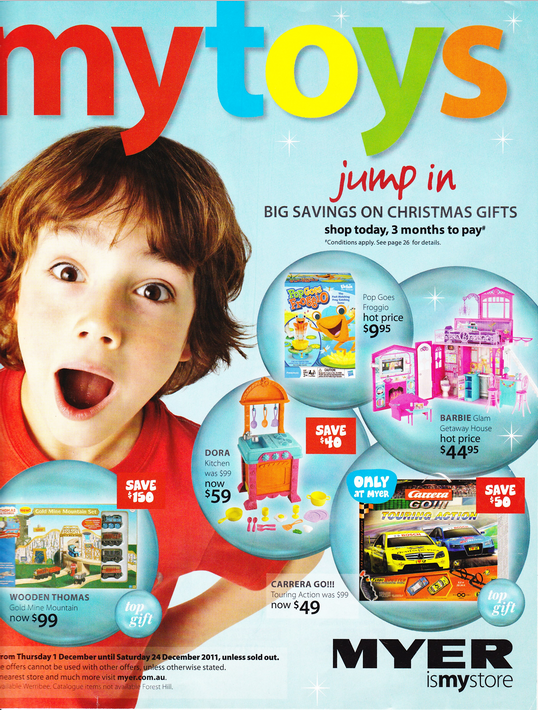 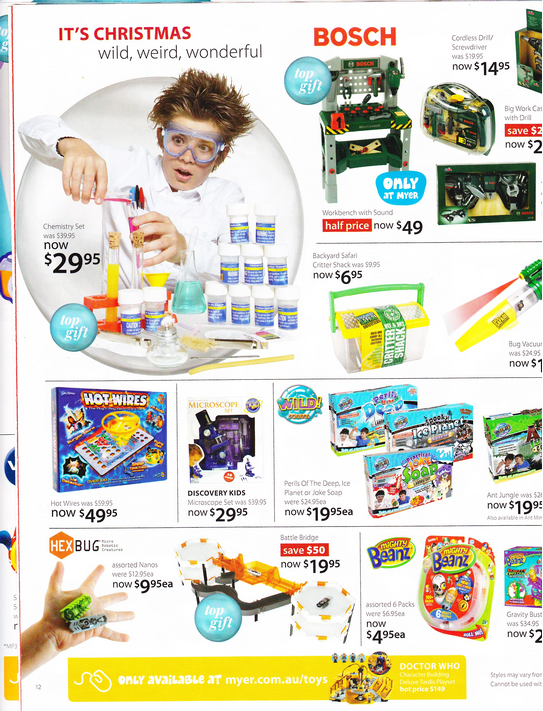 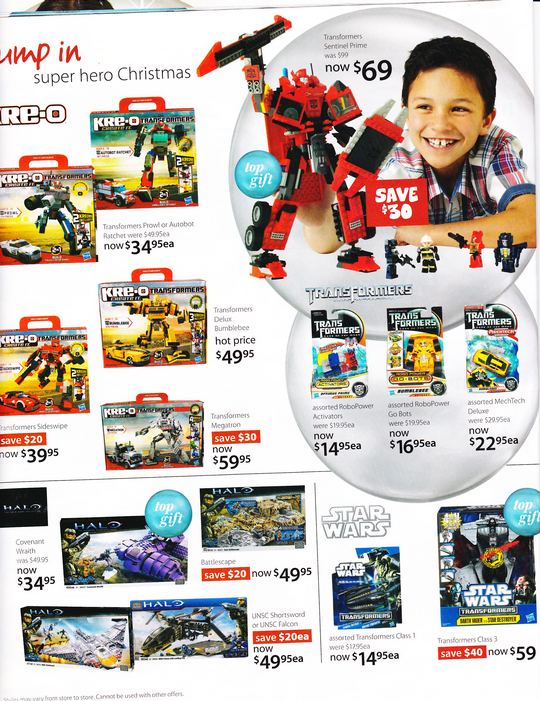 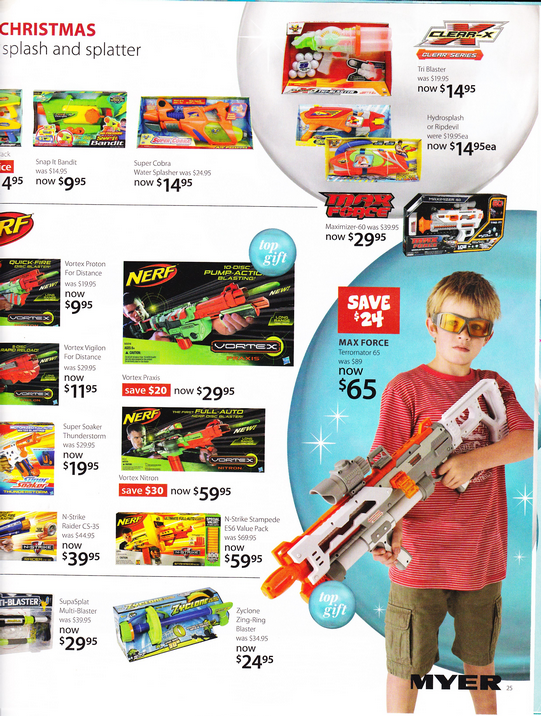 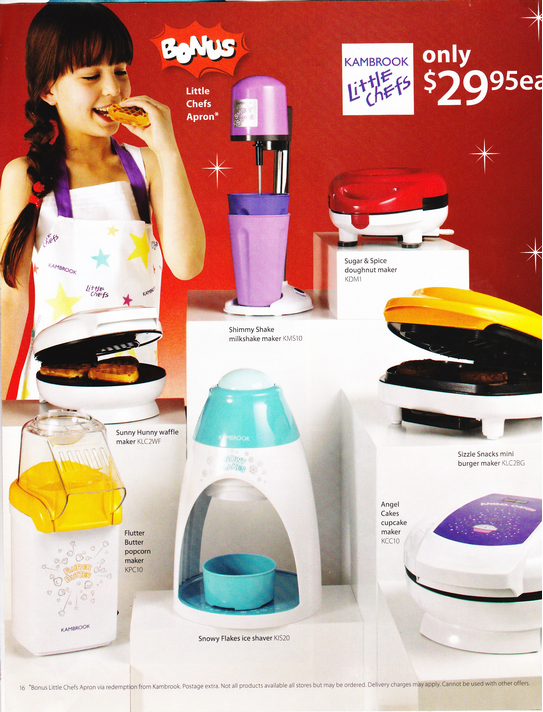 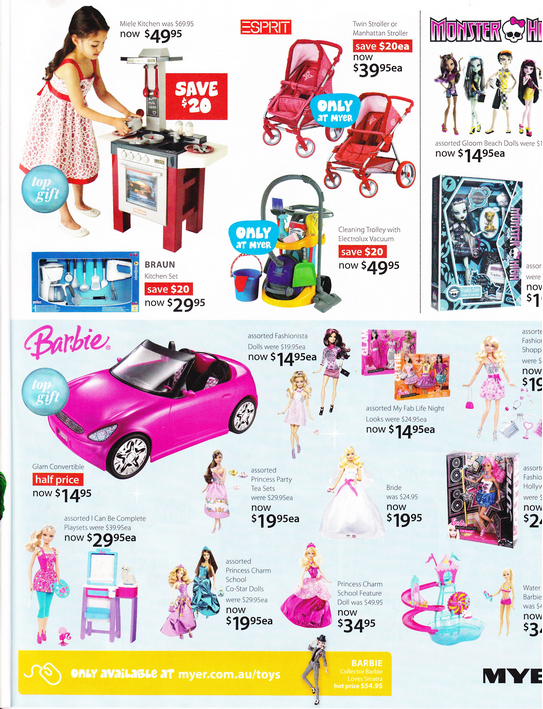 A reader-who-prefers-to-remain anonymous sent in a link to the Pottery Barn Kids holiday catalog.  Sandwiched between two more gender neutral sets of pages are the obviously boy and girl sections.  These two pictures pretty much sum it up: 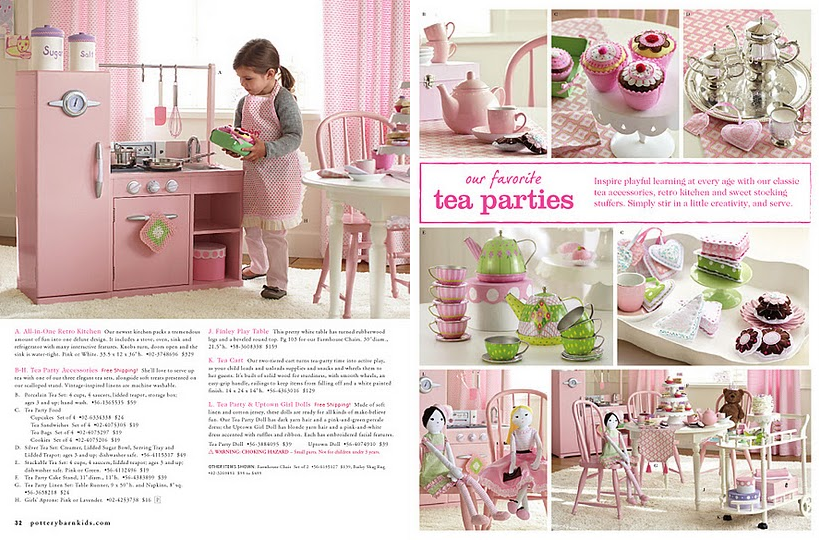 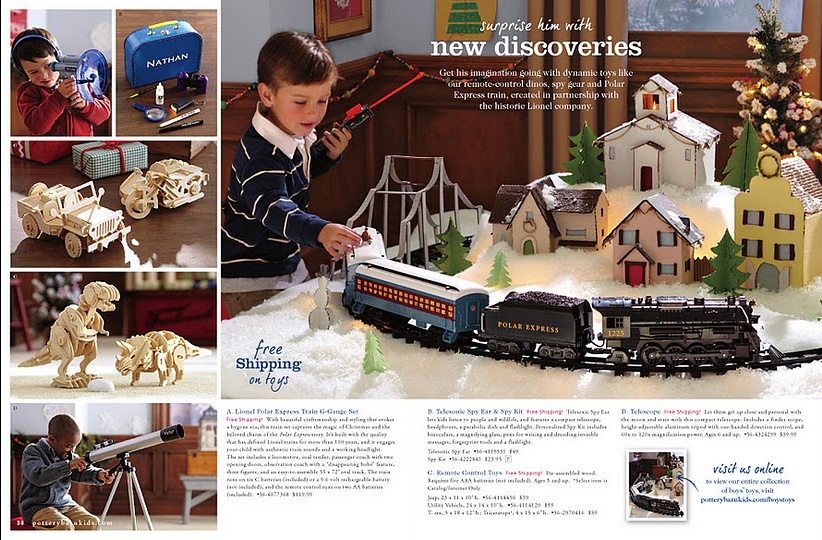 Interestingly, the reader said that the print version of the magazine was very slightly less gender-stereotypical and more race-mixed.

For a gift guide that’s not-so-gendered, visit Think Geek.  Fitz sent in links to the “For Him” and “For Her” pages on the site.  The gift guide is gendered, then, as opposed to being organized in some other way, but the suggested presents aren’t as strongly gendered as we see elsewhere.  Not only is there some overlap, but things like bacon-flavored chapstick and a pizza cutter in the shape of the Star Trek enterprise are suggested for women and things like cupcake-flavored mints and mini stuffed microbes are suggested for men.  So, it’s no gender-free panacea, but it’s less binary than we’re used to. 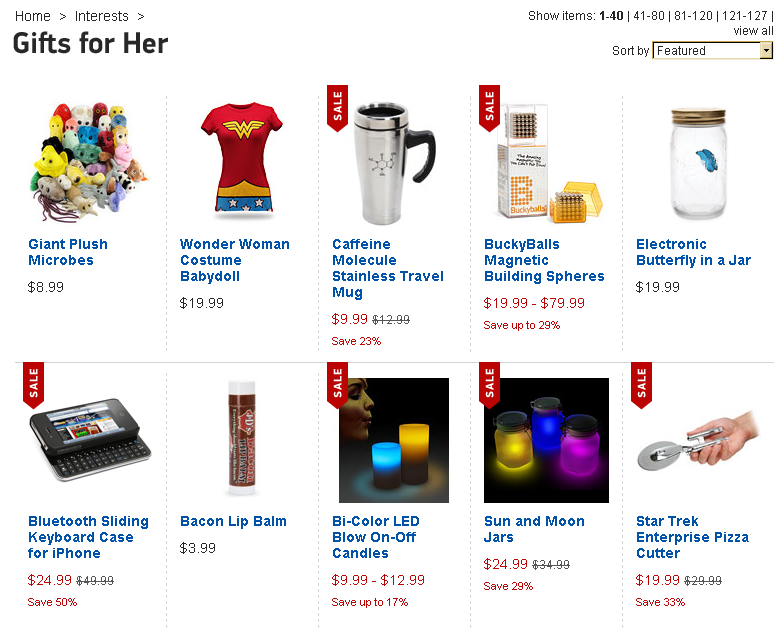 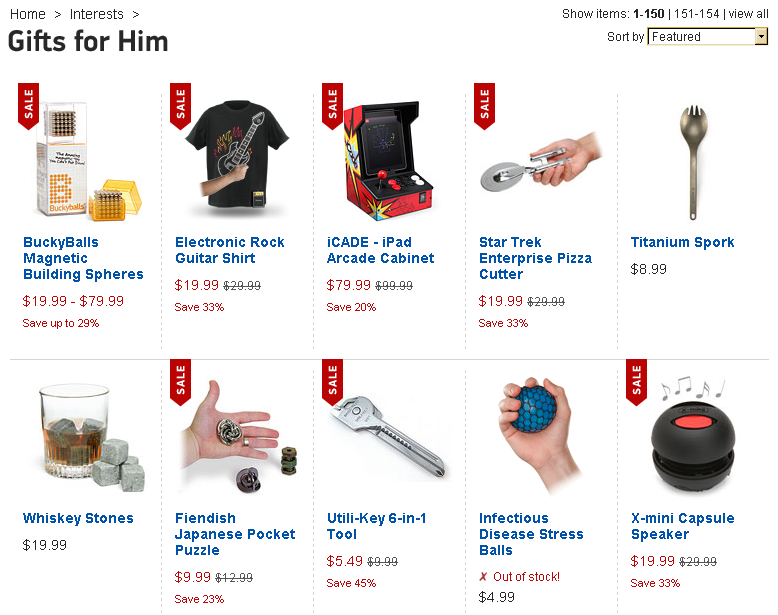 The toy catalogues are alarming! I don't reckon there's a typo on the Amazon page, though - men's watches have bigger faces so that looks like a women's watch to me (albeit one that's unusual in clearly being a timepiece first and jewellery second). And "wine = female" is confined to the US in my experience - white wine (particularly chardonnay) and fizzy wine are seen as feminine here but wine connoisseurship is seen as very much a bloke's thing.

[...] Images, a blog moderated by sociology professors and students, just released their “holiday edition” of gendered gift guides that permeate online stores. From "Art of Manliness," a [...]

That's true - choosing wine in restaurants, talking about wine and having wine accessories are considered very masculine in the UK.

I don't see anything particularly masculine about that watch...

ThinkGeek is generally very gender-neutral, these "for him" or "for her" things are under the "holiday giftstation" link, so there aren't even any his/her links on the homepage.  The only clear-cut gender thing regularly on the website is the "women's shirts" under their apparel tab - although there are some gender-specific items such as "The Girl's Guide to Dating a Geek" book (why is there no boy's guide?).

The only other noteworthy gender-ification from ThinkGeek is the mother's day/father's day gift suggestions, but I can't offhand remember what those might be and I delete the newsletters they send me after I read them.

I'm not saying there's no gender stereotypes at play, just that it's something ThinkGeek tries to be good about, at least in my observations.  They fail and succeed to varying degrees, but you'd definitely never see any "I'm too pretty to do math" shirts on their site, that's for damn sure.

To be fair, after working 6 years in a library, the only people I ever see in the 940's (war) area are old men. And I've always wondered why they enjoy reading about it so much...

The Star Wars for husbands/boyfriends thing really annoys me though. I'm a woman and I've loved SW since I was 9. Also I would have definitely preferred the model train and dinosaurs over the tea party stuff when I was a kid.

"I don’t know what that is, but wine is woman-y right?"

Not really helpful, sardonic or no. Wine is not typically gendered.

Also no comment on the "teenagers want gadgets" or "kids want nerf and stuffed animals" branding?

Think geek does have a Star Wars toy under it's gifts for her section, I guess if you call yourself a geek you've inherited a stereotype that trancends gender in certain respects.

What I personally find encouraging is that they have only one toys for kids section.

I've been getting e-mails from Amazon.com, Amazon.co.uk and Amazon.de for a while now. Having analyzed them I suspect that these "Gifts for (Group X)" are auto-generated: sometimes there is nothing specific about them, the gifts for group X are just as random as those for group Y.

I'm curious about what is so objectionable to marketing to men and women differently. I'm guessing that it's because it reinforces stereotypes which are supposed to be harmful somehow? How exactly are they harmful again?

So... is the idea that businesses whose primary goal is to make a profit, should forgo gendered marketing strategies for a few generations so that we can someday live in a world where men and women both want to wear dresses equally and both want to own DVD war documentary box sets equally? Why is that world preferable to this world? Is the goal to make men and women completely the same? Why do we want that?

Stereotypes ARE boring. So, so played out and boring... and tiresome.

Well, if your husband stuffs a brand new tool box under the tree filled with tools be sure to thank him profusely and get started fixing that leaky toilet. After you're finished with that, he's got an envelope with a honey-do list to complete.

You of course can give him a sexy teddy, which he'll wear every night. After you're done fixing all the projects he's given you, you'll have to please him whenever he's in the mood. If you don't satisfy him, he'll tell all his friends what a failure you are in the sack.

Catalogs seem especially egregious, and the holiday times probably further emphasize the divides, what with the pressures to find appropriate gifts, sometimes for people you don't know very well, like kids of friends or distant relatives.

I'm a little hopeful we might see this trend start to fade a little bit. Hasbro now has the "Brony" phenomenon to deal with, and at least one British retailer is changing things up: http://www.mirror.co.uk/news/top-stories/2011/12/14/hamleys-toy-store-removes-sexist-signs-after-gender-stereotype-criticism-115875-23634658/ .

Also, her is a little girl raging against the system: http://www.youtube.com/watch?feature=player_embedded&v=-CU040Hqbas  :)

i've never been able to use a gendered gift guide to buy anything for anyone i know.  i mean, my mom will wear jewelry, but she'd rather have a book about politics.  my dad likes comic books (i guess that's becoming more common of a dad thing, but my dad is 70!)

i also always make father's day cards for my dad, because he doesn't golf, bbq, fix things around the house, or appreciate sports of any kind for any reason.

i also think if you don't know someone well enough to buy them a gift based on more than their relationship to you (girlfriend, brother, mother...) or their gender, maybe you should just buy them a gift certificate to amazon.

You could always get your little girl a "boy's are stupid throw rocks at them" t-shirt. That'd break that nasty gender stereotype!

So neither my wife nor I have an iPad, but it's safe to say that either one of use would consider one to be a fine gift.  I'd say our enthusiasm for an ipad would be equal and as such I don't think it's a gendered gift despite the fact that gadgets in general tend to be gendered as "male" gifts.  Having said that, I notice the iCade is listed as "for him".  As an avid retro gamer I'd love to get an iCade, almost more than an ipad to be honest...but I digress, anyway, I wonder how many ladies out there want an iCade.  I've been to several retro gaming conventions and I have to say they individuals attending these are predominantly male despite the fact that when I was a kid it seemed like the arcades were populated with just as many female pac-fanatics.   It's hard for me to not consider the iCade a good gift for many of my male ipad owning friends and equally terrible gift for many of my female ipad owning friends.  Am I way off base?  Any ladies out there have an iCade on their christmas list?  In general I think that most gendered gift guides make arbitrary distinctions, seriously why can't a woman get a sweet six in one utili=key...but in the case of the iCade I think they may be onto something suggesting that it's a safer bet for a man than a woman.

It starts when they're young. It's not surprising to see the Amazon pages with "typical" gifts for men and women when we start them in pink and blue camps as kids.
#GiftingGender

[…] best. Even when sites are able to provide decent categories, they generally just pick a handful of stereotypical gifts at random and throw them in to the mix. For example, a boyfriend gift list will probably have some […]

Yes,I'm totally agree with your text and I'm so inspired :)