This Year in Gendered Gift Giving

Five readers sent along gendered gift guides.  These are interesting only in their ubiquitousness.  Let us begin:

What do women want? According to an email from Chapters.Indigo, sent in by Rajan P., they want candy, wine, fictional romance and, um, blankets (for coziness?): 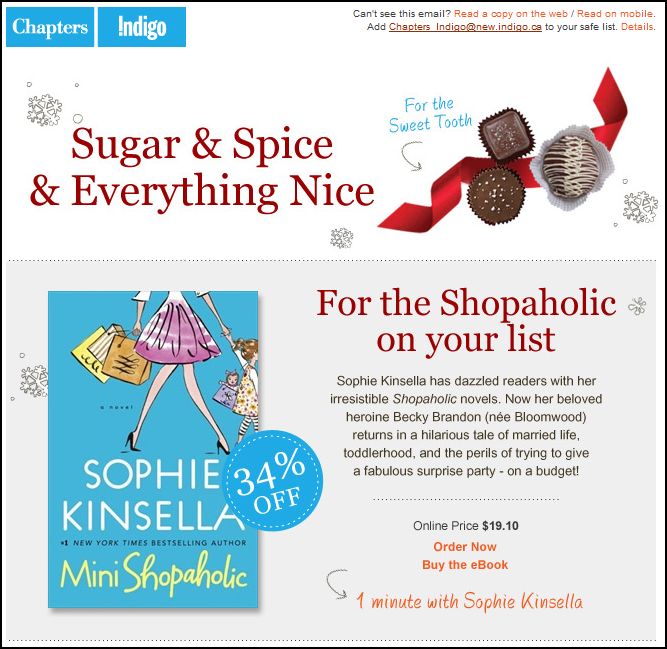 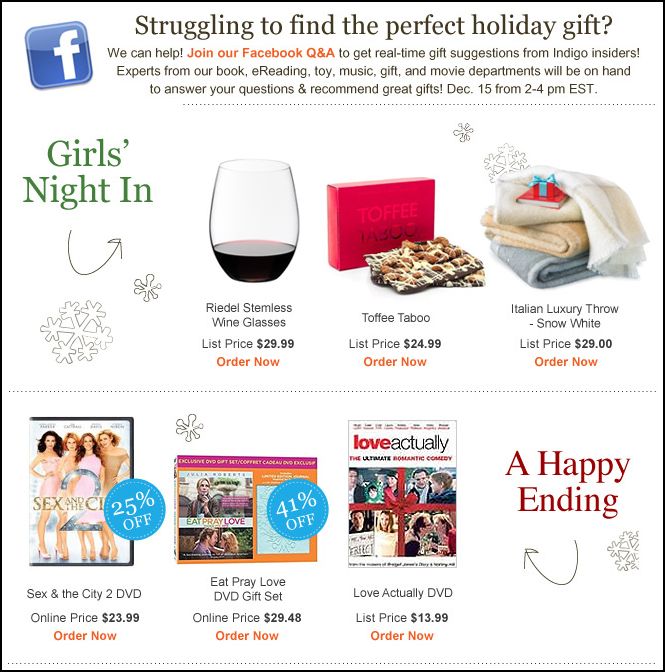 Liz from Minneapolis got an email from Amazon.com with ideas “For Him” and “For Her.” Liz writes:

The gift ideas for him are manly things like a coffee mug (but described as a vacuum sealed tumbler) and barbeque tools, while gifts for her include a hideous Precious Moments figurine and a super handy plant care sensor. 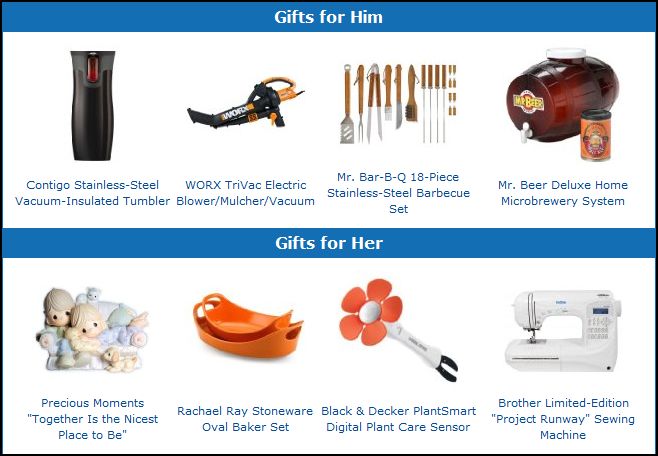 Eileen B. sent a link to the gendered gift guide at gifts.com.  Apparently women want wine, love, coziness (sweaters, hot baths, and aromatherapy), cooking stuff, anything-Oprah, and men who clean (are we seeing a trend yet?): 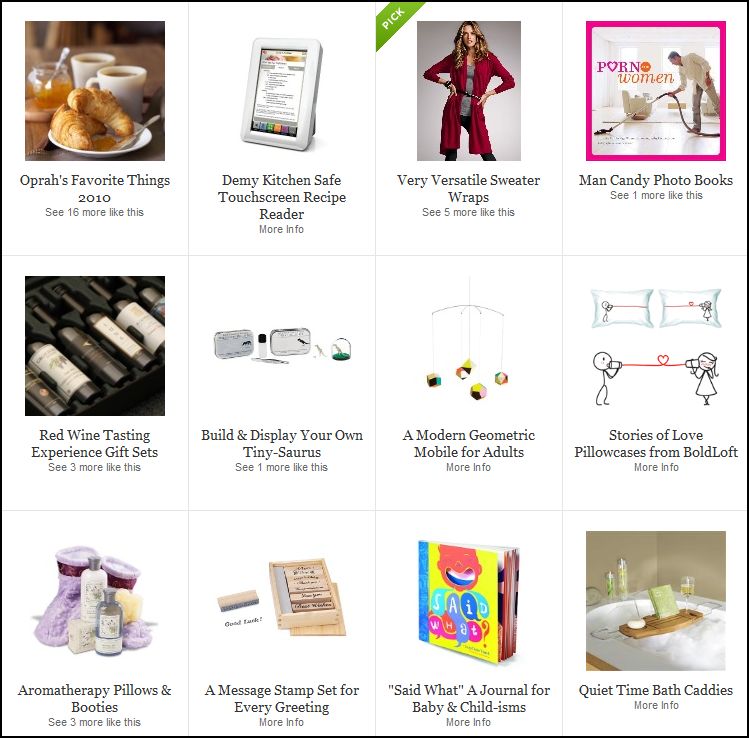 While men want beer, golf-related items, and a giant plastic nose that snorts out your shower gel: 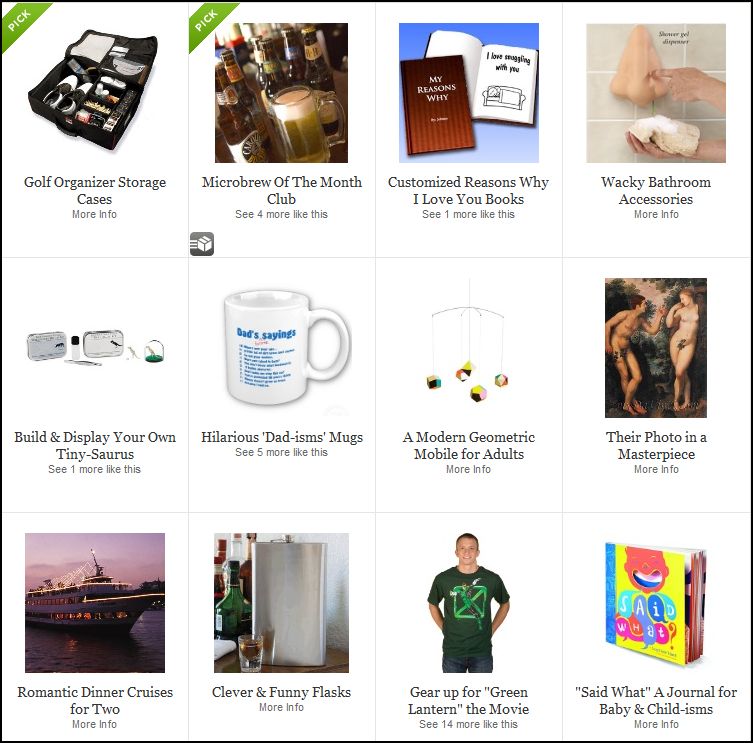 Both want grown-up mobiles, tiny-sauruses, and a baby book, so there’s that.

Another reader, “a reader,” sent in links to the site Shapeways which thinks women want decorations (for their bodies and their homes), but figures men want stuff to do (“gadgets” and “hobbies,” with a few hard core accessories thrown in): 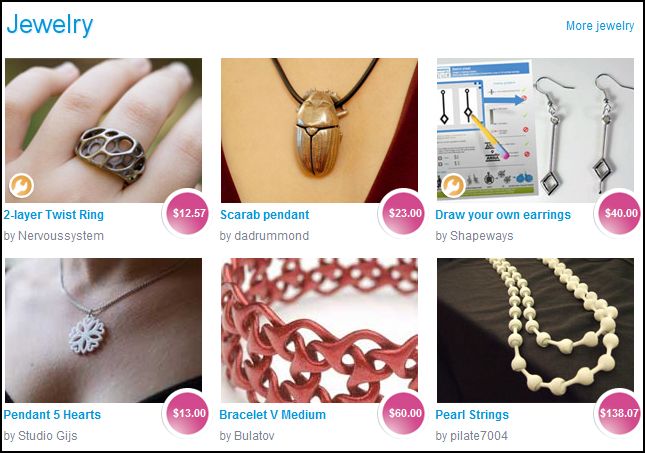 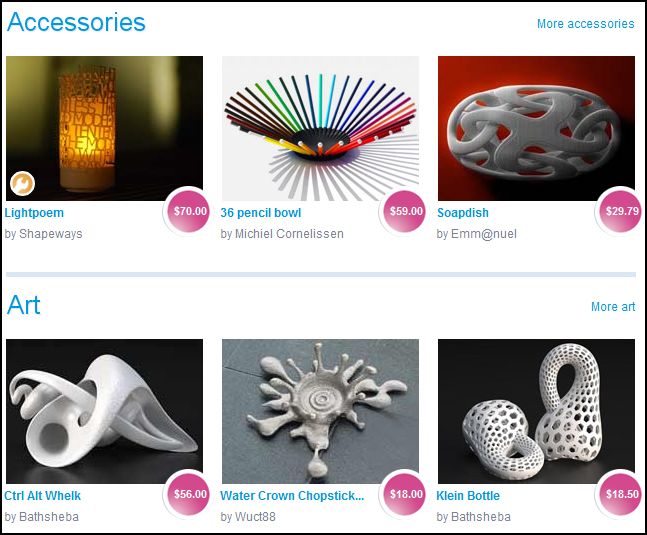 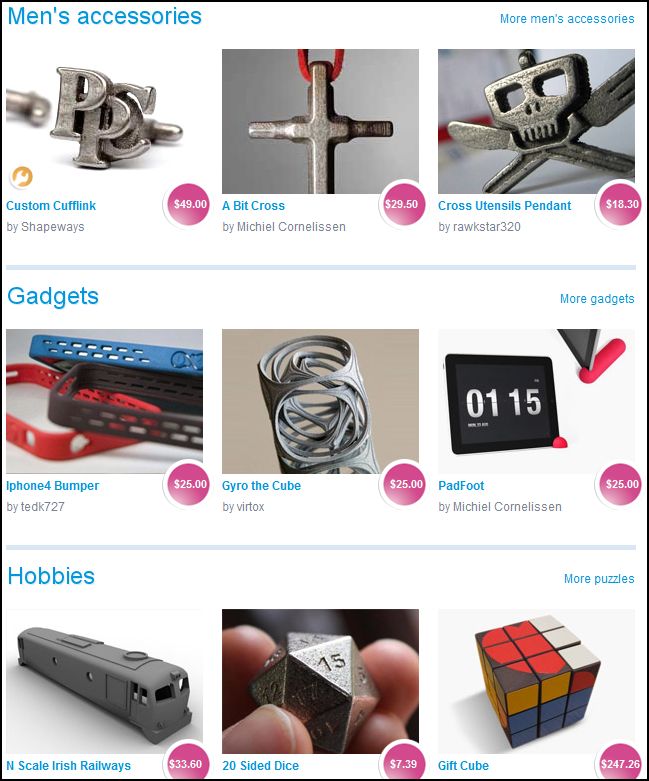 Apocalyptopia sent screen shots of the gendered gift guide from Zazzle.  She writes:

We have the old, tired “only guys like History and video games” trope. I also noticed that there’s an “Animal Lovers” category under Women, but the only similar category to be found under Men is “Outdoorsman” (if you don’t count Party Animal) which deals more with killing animals than loving them. Chicks are just so sentimental, right? (Gag!) I also can’t understand why “Traveling” is found under Men but not Women.

The thing that disturbed me the most about this, though, was that for Men they have a “Veterans” category while for Women they have a “Support Our Troops” category. As the daughter of a retired female veteran of two wars, I was a bit offended. I’m sure my mother would be offended as well that they think watching her friends get blown up still doesn’t make her qualify as a real veteran and that she’s relegated to simply supporting those who are (i.e.: men). 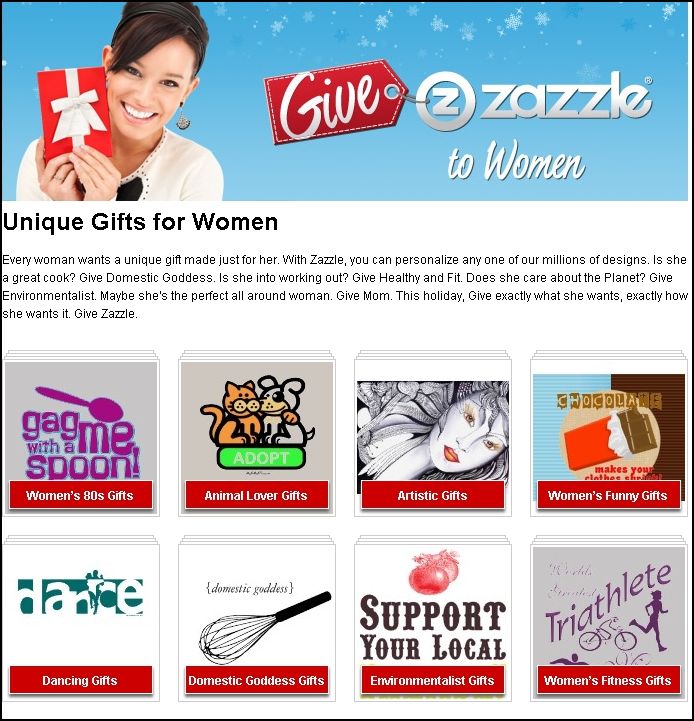 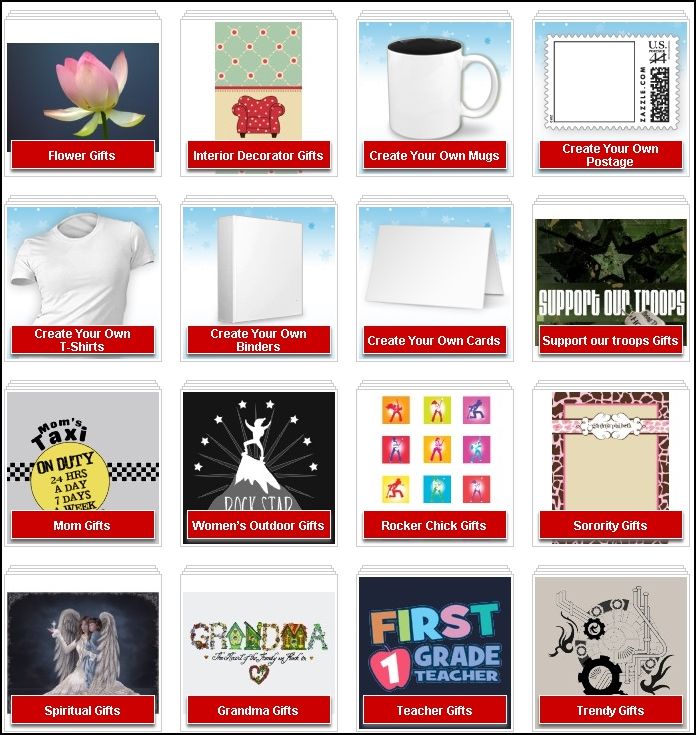 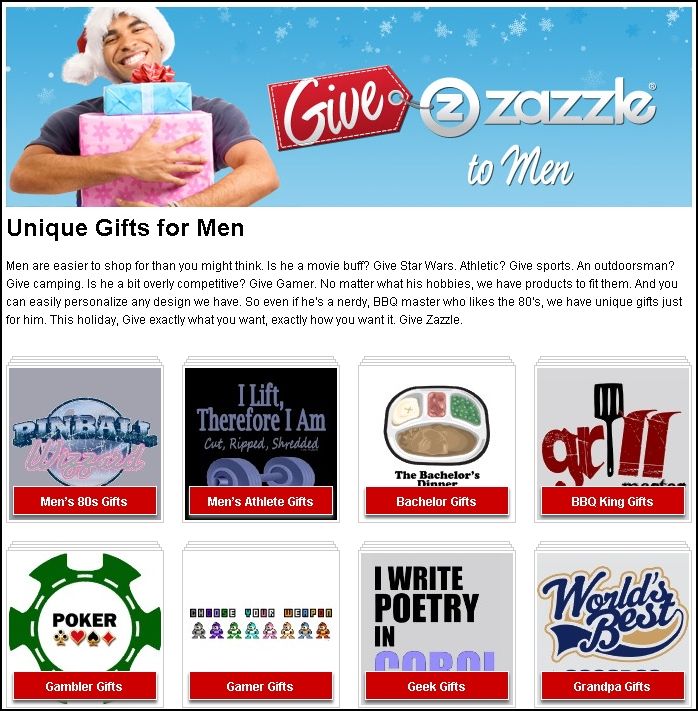 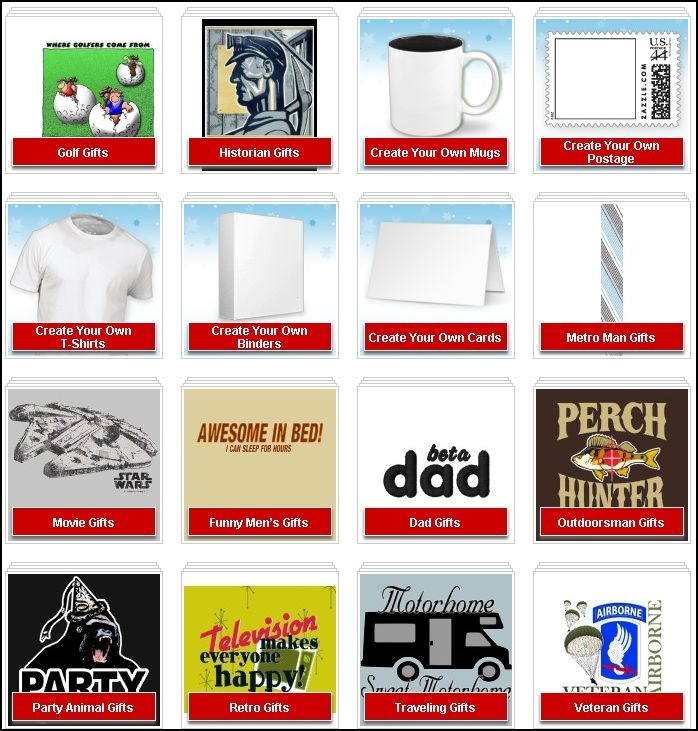 Finally, Michelle Y. alerted us to a gendered game at the Karmaloop website. Men are told to search for a sexy lady; and ladies? A Pomeranian. 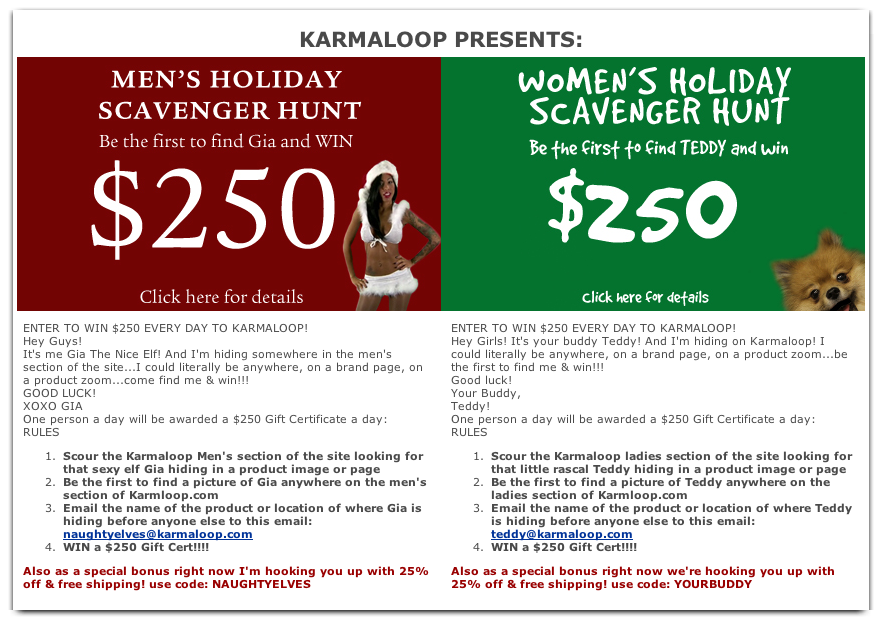 I find it difficult to buy presents for my male friends because the suggested gifts that such sites offer are so stereotyped. I don't know anyone who is interested in those things.

"Maybe she's the perfect, all around woman. Give mom." From the catalouge about categorizing people.

I think "all around woman" and I think a female Leonardo DaVinci. Though the gifts seem to be a lot of shirts and buttons with "#1 mom" type generic stuff, so unfortunately those don't quite line up.

I think what's more "tired" is the reactions to these things... if the people you know don't like these things, don't get them. By saying it's a "Gift for Him" doesn't mean she wouldn't like it and vice versa. Companies stereotype AND ALWAYS WILL. That's how you reach the largest segment of the market. Niche companies will target different segments of the population. This will NEVER be the job of the HUGE national and multinational corporations.

I dig the Klein bottle, but that's a gift for the mathematician/ science geek in your life...

oh my god, gifts.com is right! i DO want a tiny-saurus! actually, i think the gifts.com site is the least gendered mainstream site i've ever seen (apart from it perpetuating the gender as binary construct).

i'm on the first page of the top picks for women and it includes a lego architects set (!!), monsterhoodies (!!!), gadget cases, ticket stub holder, kindle, as well as three or four clothing items. NGL i think that's a pretty wide representation of choices.

what i find more interesting is the breakdown of age brackets there. you can choose between College/Young Woman, Woman (30+), or Senior Woman. so basically you're not officially a woman until you're 30.

meanwhile, all the stuff i like is from uncommongoods.com which is far, far more stereotypically gendered.

Did anyone else notice the "Metro Man" section with a picture of a tie? That bothered me--it's as if men who clothes must be "metrosexual" and not "normal men", also reinforcing the heteronormative culture of "manliness"

it's weird how stuff gets so gendered. I was buying curtains for my new student room 2 weeks ago, and they had to be sewn. The girl who sold me the curtains was in her mid-twenties, like me, and i always thought people in my Dutch student town were quite progressive. But then she said: 'you need to find someone with a sewing machine who'll sew them for you. Maybe your mother? Or your sister?'. I said I would try and do it myself maybe. 'or maybe your grandmother? An Aunt?'. No, I think I'll do it myself. 'Maybe you have a female neighbour or roommate'?

it was ridiculous. When I went to my parents' house to use the sewing machine, I insisted on doing it myself, and it worked out quite well, thank you very much.

Is it bad that I want most of the things designated for men?

Especially the Dublin train and the metal 20 sided dice!

It's funny, because the tips for buying for men fit for me, and most women I know. What do we like? I like music, I like books, I like history. Get me things related to those interests, and I'll be happy. You know what doesn't make me happy? Assuming that because I'm a girl I don't have specified interests and I'll just be happy with whatever pink, "sentimental" shit you find. I don't know, I think it sends a particularly disturbing message that guys' gifts are so often specialized - even if they all fit into stereotypes, like the "car" guy or the "outdoorsy" guy or the "army" guy - whereas women are all thought to like the same things?

I remember that as a teenager, I'd get all these generic sexist gifts from relatives who had probably used gift guides like this. I always made a point of showing them how much more excited I was by the Led Zeppelin CD from someone who actually paid attention than by the nail polish from someone who didn't (I haven't worn nail polish since I was 10, as long fancy nails make cello-playing kind of difficult).

Women are not allowed to like romance movies, wine, or chocolate. It's unfemininist.

[…] Sociological Images looks at this year’s gendered online gift catalogues, taking on Chapters/Indigo, Amazon, and others. […]