The clothier H&M is in the news this week and Craita, Ann C., and Marjukka O. all sent in links to the story.  It turns out that they are using a mannequin to display their clothes. Nothing new here.  Except that the mannequins are appearing on their website (instead of their brick-and-mortar stores) and they are photoshopping heads of real models onto the figure and changing the skin color, giving it the illusion of being a real person. 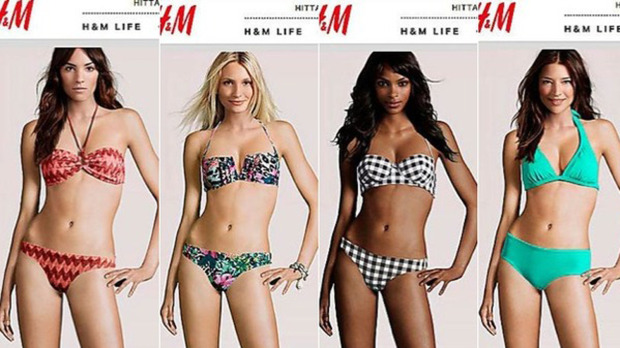 The practice is getting plenty of vaguely negative press (ABC, FOX, Guardian, Jezebel). The critique seems to be that the use of a “virtual mannequin” creates even more unrealistic bodily expectations for women than the use of “real” models (with “real” in quotes because of the degree of photoshopping that goes into creating any images of women that appear in fashion-related advertising).

To be honest, I’m having a hard  time feeling that this is either qualitatively or quantitatively different than the range of techniques used to produce impossibly idealized bodies (including photoshopping images, using mannequins in stores, using models with unusual body types, and requiring those women to exercise and diet their bodies to achieve an extreme look even given their biologies).  (In fact, Nadya Lev at Coilhouse has a positive spin on it.)

What is more interesting, in my opinion, is the way this illustrates the deskilling of labor. Models no longer have to have just the right body, nor do they have to be good at modeling (e.g., posing in ways that flatter clothes while simultaneously looking natural, not to mention the endurance and emotion work).  No, instead, modeling is reduced to a pretty face that can be nicely composed.  Everything else is done digitally.

Those in the modeling industry, then, don’t see this as an insult to women everywhere, they see it as an insult to models specifically.  FOX quotes Michael Flutie of E!’s model search show “Scouted” saying:

It is disrespectful and lazy. It is the job of the brand to properly scout for their models and find those that represent their brand in every aspect. They need to take the responsibility of looking deep into the model pool to find the right people instead of digitally creating what they need…

If this continues, models may face the same deteriorating working conditions that factory workers and many other segments of the U.S. workforce have faced: becoming increasingly obsolete.

For more on modeling, see our posts on the invisibility of labor in modeling, the dismal pay in the modeling industry, the fraudulent “model search,” and the contrasting aesthetics for “high” and “low end” modeling (all based on the work of ex-model, now-sociologist, Ashley Mears).

hey everyone,
speaking of h&m: here's a much worse add which one can find these days in german store of the brand. from my point of view it clearly sexualizes the little girl in the photo. because of the girl's dress and the man's suit the add also made me think of the documentary "daddy i do"... and thus of a sexualized father-daughter-relationship. what do you think?

Modeling is a profession we can do without.

At least this is giving work to graphics people. Maybe some models might enjoy being 3D artists as a second career.  My own job was largely replaced with computers (I'm a designer who draws) - so why not models? Technology will never stop altering how we work.

Yes, efficiency and progress change the fields that jobs are available in. The invention of the car put a lot of buggy makers out of business, too.

I think its worth noting that H&M also has male mannequin/models to dress up. There's a choice of face/race, but the body shape stays the same.

[...] for the “perfect body”. Here’s a direct link the the blog entry in question: http://thesocietypages.org/socimages/2011/12/11/deskilling-modeling-hms-virtual-mannequins/. There are plenty of other interesting blog entries in that blog as [...]

[...] though there does seem to be an increasing backlash against excessive photoshopping in recent years, at least in Western countries, the exposure this [...]

I really liked Coilhouse's take on it:

Imagine an online shop where your preferred weight/height/measurements are used to generate 3D models of the bodies that you want to see. Imagine if there was an API for this that could be used across all online clothing stores you visit, so that no matter what site you were looking at, the models appeared the way that you wanted them to. Standardized beauty ideals would become less relevant, because people would have greater control over their exposure to them.

In the short term, it may seem like computer-generated models reinforce a homogenous beauty standard. In the long term, this technology may pave the way towards greater body diversity and inclusiveness.

I have to take issue with your last comment.  Working conditions have on average gone up, dramatically, in the US over time.  And technological progress is the reason.  Better technology means fewer people are necessary to do the most unpleasant jobs, and that those jobs are less unpleasant.  I'd like to see someone come up with examples involving significant numbers of people that point otherwise.

Even pay for the lowest-skill labor hasn't really gone down, though of course many of us think it should have increased more in step with economic growth.  But that's a separate issue than working conditions, and I don't think it's related to technological progress either.  (It's related, I think, to globalization, which puts US low-skill laborers in more direct competition with more desperate people abroad.)

The "technology taking away jobs" phenomenon is only bad insofar as it creates sharp hardships in the short term that our society (and many others) do a very poor job of mitigating.  That is, in the long term, technological progress makes us wealthy, and it makes us wealthy precisely because it makes people more productive, which frees up labor to do more things than was done before.  The long-term material gains are more than enough to mitigate the short-term hardships -- for example raising taxes to provide comfortable unemployment insurance and new career training would not cost so much as to lower living standards below what they were many decades ago -- it's just sadly we as a nation have a hard time mobilizing to do this.

Now I agree there are many other issues going on with this modeling story, and those are very concerning.  It's just you seem to want to jump to this economic story and I think your take is naive.

hahahaha. You wanna kill two birds with one stone Fashion Industry? Continue to use manikins but make sure they don't have belly buttons or nipples or skin color and make them featureless in the face too. No more paying models, hence "exploiting" women. No more creating unrealistic body image expectations, so no more criticism and viola! Your welcome H &M.

In response to this:
"If this continues, models may face the same deteriorating working
conditions that factory workers and many other segments of the U.S.
workforce have faced: becoming increasingly obsolete."

Actually - models aren't really in high demand anyway. A model that gets to be famous is actually quite lucky - those just starting out are often treated poorly precisely because the market is flooded with aspiring models.
There's a good Jezebel article on this:
http://jezebel.com/5019688/dear-models-of-the-world-are-we-all-too-busy-starving-ourselves-to-form-a-union-already

Wait, what?  So you are upset that someone created software that has "deskilled" people who get paid to try on clothes in public and look good doing it?  People who have the good fortune and genetics to have a marketable appearance and a vacant stare and who get paid for these things are slowly being replaced by computer generated images created by people who went to school and took classes like math and programming and art?  Educated people can now get modeling jobs, even if they have crooked teeth, acne, or body fat.  How is this bad?

Maybe I have no appreciation for what it takes to be "good at modeling" but I am in no way upset by this.  In fact, it reminds me of the virtual models that have been around for years that allow you to choose approximations of your hair, skin, and eyes and put in your height and weight and try on digital clothes.

I think that the general problem people are having with the images is that it goes beyond photoshopping:  every piece of clothing is on a model with the exact same pose, without even the slightest difference in body.  If the faces were blank, or all the same, I don't think there would be as much outcry, but the fact that there are different faces and skin tones pushes the idea that "lots of people look exactly like this, why don't you?"  Even if that is not what was intended, and people consciously think "that's just a mannequin, I shouldn't be held up to that ideal" subconsciously it makes a difference, especially with impressionable tweens.  Just look at the impact animated characters have in Asia, even though everyone knows that they are animated?

I think that this could become a highly profitable comedy routine. Just start Photoshopping different parts of different people onto mannequins and viola! Not only does it subvert the beauty myth, but it is amusing as well. It could be an interactive game or something.

Maybe we should just start making our own fabrics and sew them. Or just don't look at catalogues.

I've been coming to this website for about three months now and there is one thing I'm certain of: the phrase "unrealistic body expectations" can be shoehorned into every article.  It's used in such an ad-nauseum fashion that it's becoming banal and losing it's power.  Rather than spending so much time attacking advertising agencies for selling a culturally-perceived ideal (that is their job, ya know), why not use that energy to educate the masses on what the word "expectations" means, and how it should be properly applied (without trying to make yourself out to be a victim).

And since I'm finally commenting, let me add...

I understand the point of coming together and meditating on social issues.  I think the purpose of websites such as this is to aid in the creation of ideologies that provide a framework upon which a better world can be built - regardless of your race, religion, or culture.

However, perhaps it's the pragmatist in me that finds half of SocImages articles to be unhelpful, narcissistic, victimism.  Furthermore, I increasingly feel that if SocImages got its wish, and got to be king for a day, and got to implement its collective ideology on the world... that world would suck sooooo bad.  It would actually be worse than the one we live in.

This is the best website i discovered the last 2 years! Thanks for this!