Pay in the Modeling Industry

A while back, Lisa drew on work by Ashley Mears to post about different preferred aesthetics in editorial vs. commercial modeling — that is, modeling for fashion magazines and runways as opposed to modeling clothing in catalogs and other venues specifically meant to lead to sales of products. Mears (whose forthcoming book, Pricing Beauty: Value in the Fashion Modeling World I eagerly await) points out that while models earn more prestige doing editorial work, they generally earn significantly more money if they can get commercial jobs (though, since the two types of modeling require different looks, models have little control over which type of modeling they’ll be considered for).

Jezebel posted an article about a lawsuit brought by three models against the modeling agency Next that clearly shows the low compensation models receive for doing some of the most prestigious modeling. This statement of model Anna Jagodzinska’s account (including payments that are still outstanding as well as deductions from her account for agency fees and services) with Next includes both editorial work (the second two items are her pay for a day of shooting with two different versions of Vogue) and commercial work (J. Crew, H&M, and large sums from agencies that put together advertising materials, such as Laird and Partners). The pay for a day’s shoot for French Vogue? $125. For the U.S. version of Vogue, the dominant fashion magazine, it’s $250: 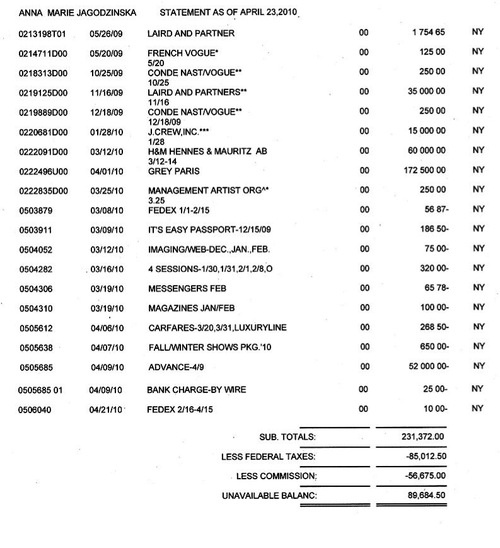 The daily pay rates for catalogs, by contrast, are in the thousands.

It’s a perfect example of Mears’s argument that models often face a situation where prestigious jobs actually pay very little; so many models want to be in Vogue that the magazine doesn’t have to pay much, and the same is true for a lot of editorial work. Also notice that this statement, from April 2010, shows that the French Vogue has owed the $125 daily fee since May of 2009, and one of Vogue‘s payments has been due since October 2009 and another since December 2009. The end result is that in return for the status that comes with these types of editorial modeling jobs, models have to accept low pay compared to the commercial market, and may have to wait a long time to get even that.

The Jezebel article I linked to above includes an excellent explanation of the various charges on the account statement and the reason modeling agencies don’t aggressively pursue overdue accounts. Notice how it says “unavailable balance” at the bottom of the statement? That means the clients haven’t paid the modeling agency, so she has that much coming but hasn’t actually been paid yet, since the agencies treat the models like independent contractors and only pay them when the agency gets the money from the client.

It's called a "loss leader" in business. The spaghetti on sale at your local supermarket for $0.49 actually costs the store, say, $0.59 to buy. They are losing $0.10 on the sale, but they got you into the doors of the store because you're saving $0.70 a box. Chances are that you're not going to trek all the way to that store for 5 boxes of spaghetti... you' re gonna buy other things that are profitable to the store.

In this case, you get paid crap for an editorial piece for Vogue... but your "Book" is far more attractive to J. Crew and H&M and Macy's.

Oh no, you mean an industry built around the hideous exploitation and subjugation of women for profits.... hideously exploits and subjugates the women who work for it? Who would have thunk it.

This is all fine, but what is so special about models? There are all sorts of jobs where the pay is vastly different for similar work. You could say the same thing about, for example, academia vs. industry. There is even the same dichotomy as in the modeling example: academia is more prestigious but industry pays better.

This phenomenon isn't limited to modeling. Many prestigious fields, for example, publishing, pay very little to entry-level and line workers. Poor people, except for those to whom money in unimportant, tend not to work in such fields.

I think the two factors that make this example interesting are 1) just how dramatic the disparity is -- J. Crew is paying more than **100 times** as much as French Vogue! (though I'm guessing there were more hours involved), and 2) it's counter to many people's assumptions: Despite knowing full well how things work on the editorial side, I still would've assumed Vogue et al paid more than they do, relative to other clients.

[…] “Mears (whose forthcoming book, Pricing Beauty: Value in the Fashion Modeling World I eagerly await) points out that while models earn more prestige doing editorial work, they generally earn significantly more money if they can get commercial jobs (though, since the two types of modeling require different looks, models have little control over which type of modeling they’ll be considered for).” read more .. […]