Pepper Spraying Cop and the Power of an Image

Last Friday at the University of California-Davis, a group of student Occupy Wall Street protesters were pepper sprayed by university police for refusing to vacate the campus quad. As Lisa pointed out, thanks to the widespread availability of phones with cameras, the incident was photographed and recorded by dozens of onlookers. As a result, images and videos of the pepper spraying incident have flooded the internet. One video has received over 1.7 million views on Youtube; another shorter clip has almost 1 million.

One image, taken by Louise Macabitas, has become iconic (via San Francisco Citizen): 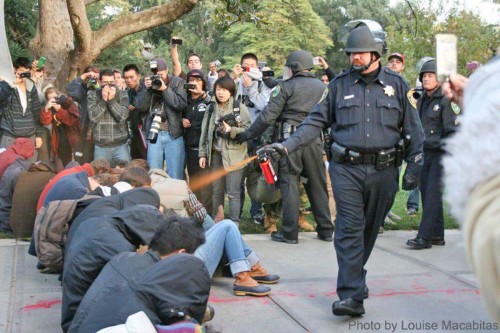 The image is striking in several ways. First, nearly everyone watching has a camera or cell phone and is documenting the event. Second, there is a strong visual separation of the police and protesters — the police are standing, while the protesters are seated. Third, the police officer who is spraying protesters has a very casual, removed demeanor and stance. There is no direct confrontation occurring to seemingly warrant such an action. The image depicts an imbalance of power, as students crouch and hide their faces from the pepper spray wielded by campus police.

The image has so much visual power that it has taken off as an online meme. Consider these variations, all posted at Wired.

I think this meme is itself a form of visual protest. The variations on the original image reinforce the perception that the police officer’s actions were inappropriate and an abuse of power. The use of famous scenes and works of art creates a cartoonish depiction of inequality and injustice, of someone using their power unjustly against those who obviously have less power — children, kittens, the unemployed, etc. (via the Pepper Spraying Cop tumblr): 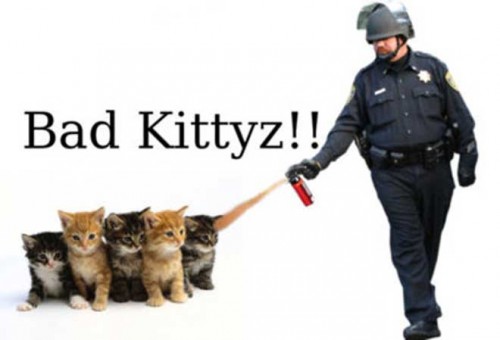 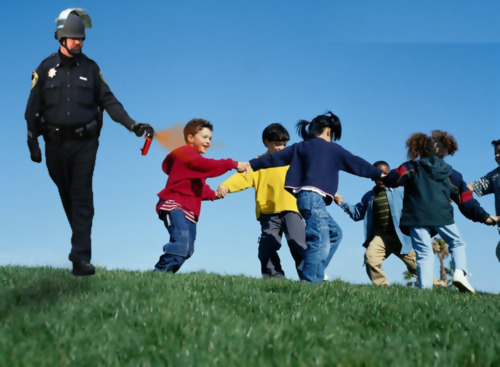 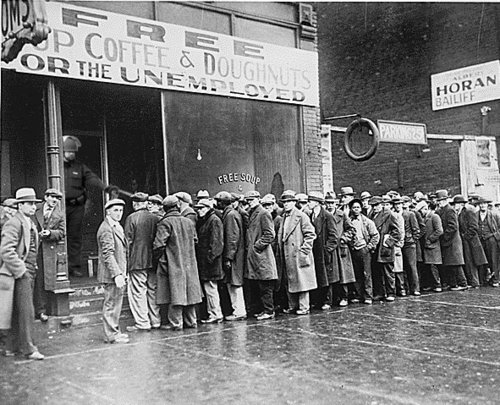 Other images present the officer’s actions are an affront to justice, by using images associated with freedom, democracy, or peaceful resistance (found at the Pepper Spraying Cop tumblr and CyBeRGaTa: 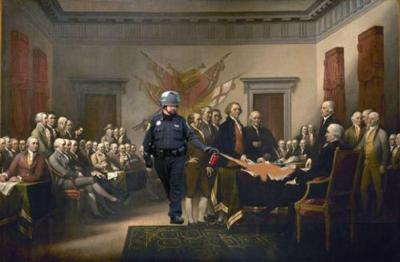 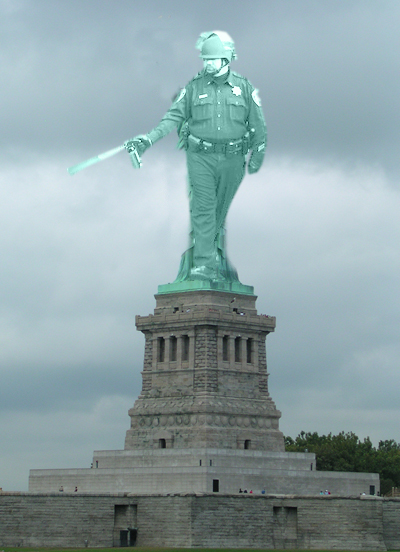 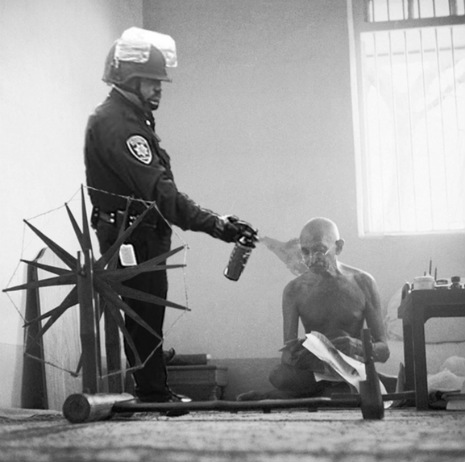 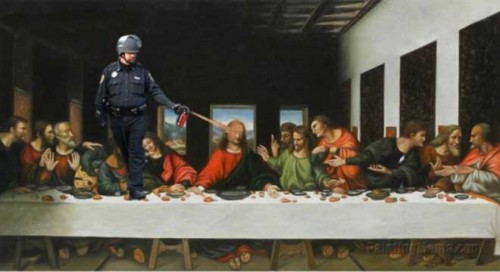 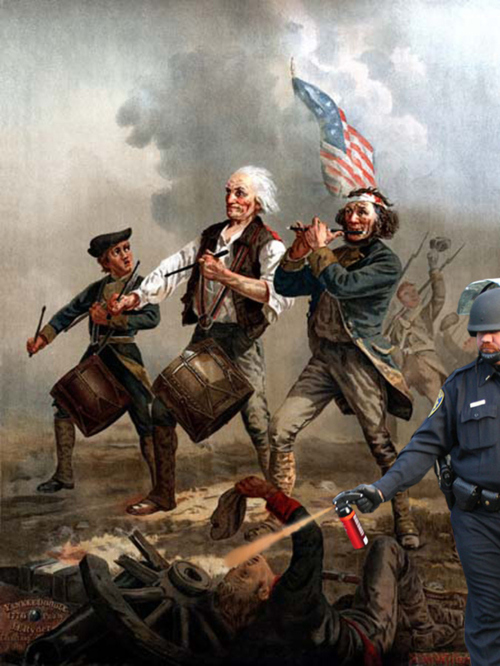 This one merges the image with another iconic photo of an abuse of police power on campus, the shooting at Kent State University in 1970 (via CyBeRGaTa): 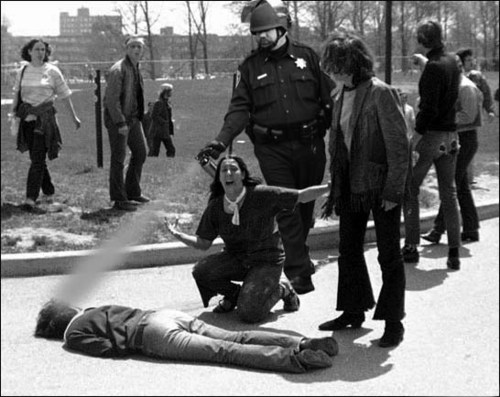 Reproducing this image of injustice online is a form of visual protest, spreading images of perceived injustice in different visual contexts across the internet. The meme is a commentary on how we culturally and historically understand power inequalities and the limits of appropriate uses of power.

Yet, while this is a powerful form of protest that draws important connections, the meme also removes the officer, Lt. John Pike, from the original context of his actions. This runs the danger of focusing on Pike as a lone actor, and not an individual whose actions are shaped within the larger institutional system of justice. As Alexis Madrigal warns us in “Why I Feel Bad for the Pepper-Spraying Policeman, Lt. John Pike“:

Structures, in the sociological sense, constrain human agency. And for that reason, I see John Pike as a casualty of the system, too. Our police forces have enshrined a paradigm of protest policing that turns local cops into paramilitary forces. Let’s not pretend that Pike is an independent bad actor. Too many incidents around the country attest to the widespread deployment of these tactics. If we vilify Pike, we let the institutions off way too easy.

While I understand the systemic concerns, I think it is time to hold police officers individually accountable, not as scapegoats, but as collaborators with the system. The police in a police state are doing more than "following orders," they are taking sides. If you read some of what was said among police during the state-sanctioned theft of property and illegal restriction of the right to assemble and the right to free speech (including the limitation of the press) that was reported during the ousting of OWS from Zuccotti park on November 15th, you will get a sense of the attitude many have towards the occupy movement (http://motherjones.com/mojo/2011/11/josh-harkinson-countdown-olbermann-occupy-wall-street-raid).

If the police officers stood up and said "no" to their masters regarding the control of citizens, this would be a very different system. Let's not become so sympathetic we forget the power they wield and the possibilities they have to make a difference. They are agents making choices and I believe just like the rest of us, they should be held accountable for what they should have done, but refused to do as much as what they have done.

I'm kind of shocked by this sharing of the image.  But then again, how do we normally define a meme?  Is it for entertainment or for communication.  Most memes I see are for entertainment.  So, does this make it right?  Is it helpful, or is it a trend that we are justifying for no particular reason?

The sharing is fine, and I think good to get those who may not follow news to hear what happened.

However, I'm more disturbed by all the people with cameras who take photos but don't do anything else.

I think this blog has posted about the "Don't Tase Me Man!" guy where people just watched as someone was abused -- the concept that when people now see something happening, where they could do something about it, they end up just taking out their camera phone and tweeting about it instead.

We need more action like this reaction to police brutality during a football game in (Italy?  Not sure):

The man needs to be brought to justice for his own individual action, that's how the institution can be brought down. The institution is simple a group of individuals, if you can really stop one, you can stop them all. Arrest John Pike.
http://www.change.org/petitions/the-california-attorney-general-arrest-lt-john-pike

I think this is ridiculous.  The fact that the protesters WERE sitting and WERE covering their faces means that they were given the warning that they would be sprayed if they refused to leave.  This was THEIR choice to remain.
If your teacher warns you that there will an exam tomorrow, and you show up having not studied, subsequently fail, and are put on academic probation b/c of your actions...is the teacher responsible for failing you?  Is the school?  You chose to come to school unprepared, face the consequences.  These protesters chose to remain despite warnings that they would be sprayed if they stayed. Face the consequences.

Spraying Jeff Miller?  Why not Allison Krauss?  In Egypt, the sexist pigs use live ammo on demonstrators.  In America, where we enjoy an equality of classes within a capitalist democracy, police are restricted to using pepper spray since Kent State (and Jackson State).

[...] serving the interests of the 1%. Similarly, the “casually pepper spraying cop” meme has used humor to draw attention to the excessive use of force by police against protestors. It was only a matter of time before [...]

Thank you for sharing and analyzing these images--I think your final observation bears repeating.

I talked about how interesting it is that you took note of a meme on my blog. It doesn't happen everyday.

I actually disagree.  I think that especially the Kent state photograph and the ones of the people in the breadlines show him as part of the system still.  In fact, I would argue that it shows the history of that system by showing us how oppressive the system has been for many years, decades, centuries, etc.

[...] A retired New York Supreme Court judge offers first-hand accounts. The Society Pages looks at the social implications and power of the famous “pepper spray” image. The Stranger is reporting that Jennifer Fox, who was assaulted and pepper sprayed during the [...]