Homosexuality and our Collective Consciousness

While men have always had sex with men and women have always had sex with women, the idea that a person could be of a particular homosexual type (as opposed to someone who did homosexual acts) only emerged in the late 1800s (in Western culture anyway).  Even then, it took a very long time for the idea that gay people might be among us to filter through popular culture.  Only after an active gay liberation movement made homosexuality more visible did people actually start to look for it in people they knew.

Accordingly, things that look very “gay” to us today, didn’t look that way before homosexuality became part of our consciousness. In a previous post on this topic, I discuss a vintage soap ad in which two naked men in a public shower have a conversation about “hard” water and “lathering” up.  It seems to have clear gay undertones today (maybe overtones), but it wasn’t meant to suggest homosexuality then.  Likewise, a series of military recruitment posters, sent in by Katrin, might very well trigger the “specter” of homosexuality today, but likely would not have inspired giggles at the time. 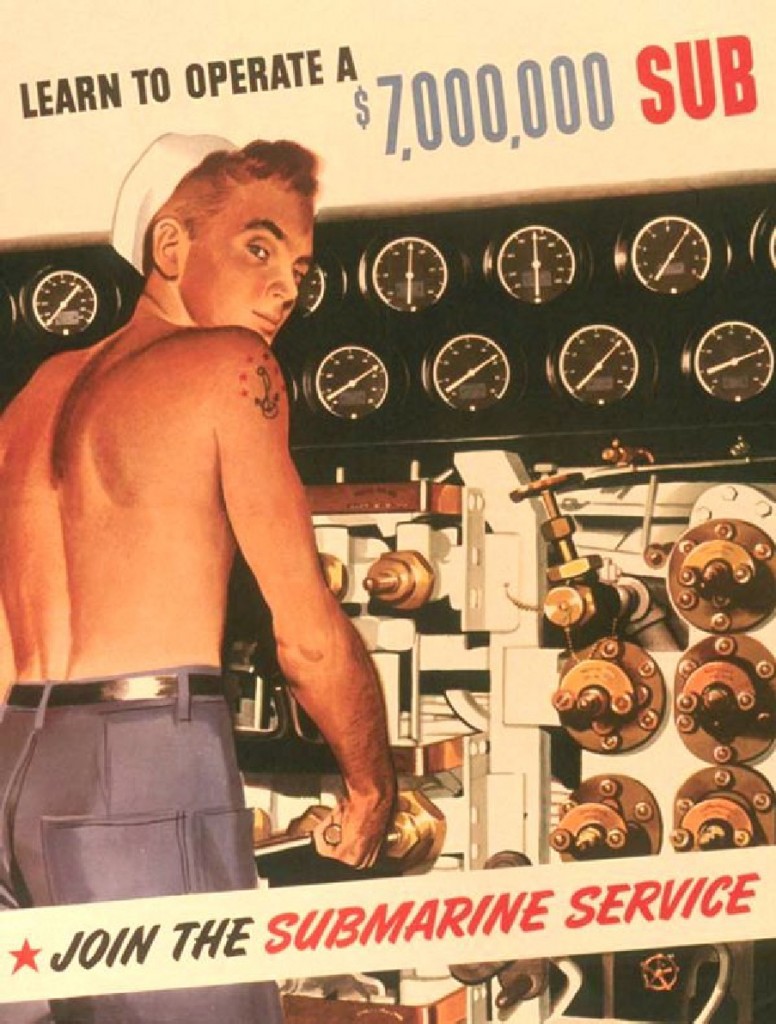 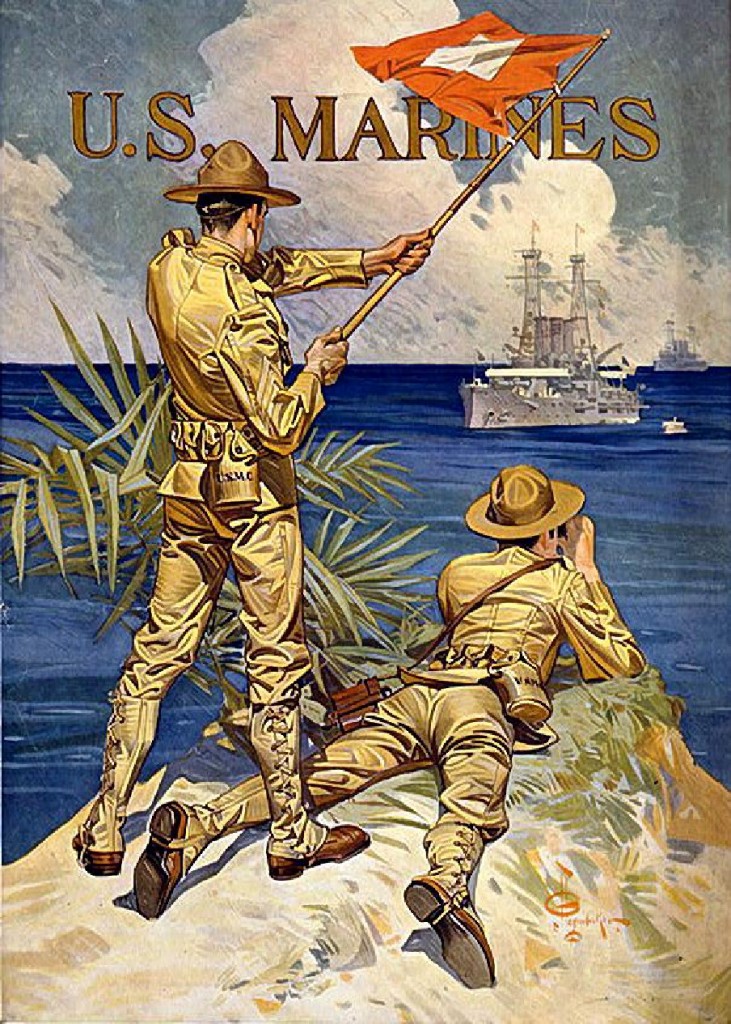 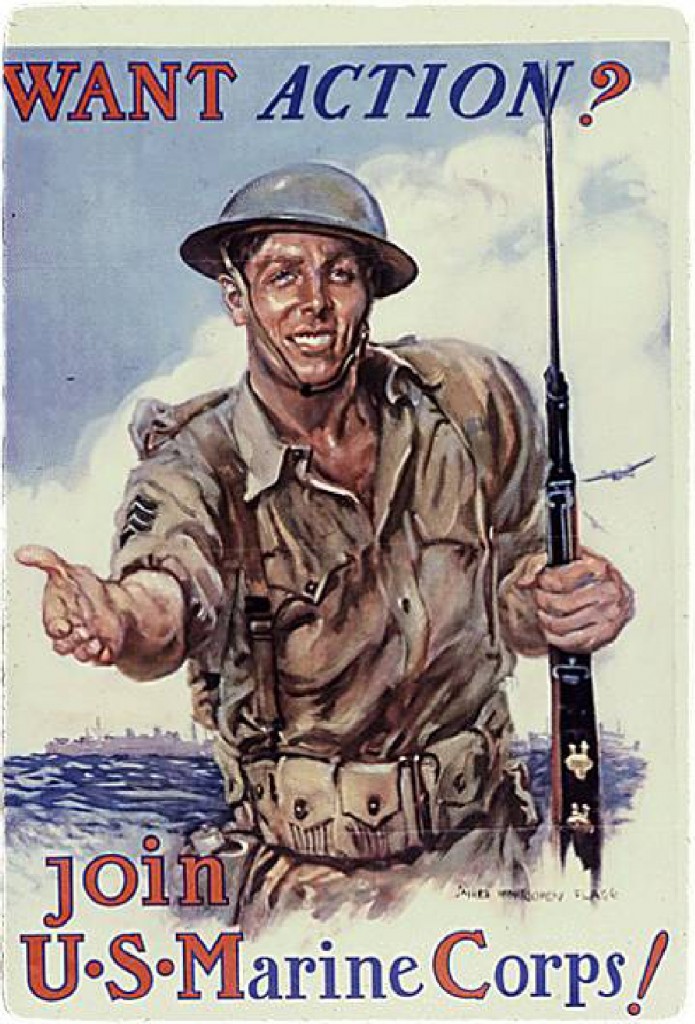 Historian Louis Crompton argues fairly convincingly that this is nonsense in his excellent "Homosexuality and Civilization."

I think awareness of homosexuality, and the 'homosexual' especially in men has been around a lot longer than since gay rights emerged in the 70s.

Even nowadays adverts e.g. for underwear with David Beckham half naked, are incredibly homo-erotic and people do not think of them as 'gay'. This is called repression and is as old as the hills and as resilient.

I think you miss an important aspect of hyper-masculinity or toxic masculinity apparent in these images. That these images appear to us to be homosexual, and not in their specific context, does NOT prove that homosexuality was not common/known/feared within the context of these photos. It's important to remember that the military was/is seen as a zone of hyper-masculinity, such that homosexuals, given their feminine nature, could not be a part of. Thus, these men, it is argued, could in no way be homosexual, no matter their feminine-homosexual flair, given the hyper-masculinity of their profession. This is also the reason why men could actually have sex with men in the army/navy without appearing to be gay, i.e. have a homosexual identity/essence/soul, early in the century (See Chauncey, Christian Brotherhood or Sexual Perversion).

An unfortunate side effect is to make many classic tales almost unreadable with many young people. The whole concept of expressive platonic male love is gone from their worldview. It'd be nice if we could have both.

Some of the pics have phallic imagery, rather than what I'd consider homoerotic subtext, but how do you make a missile or bomb look NOT phallic?

It amuses me sometimes that things which are pointed out as homoerotic, like the Top Gun volleyball scene, might be, but they also can be interpreted as eye candy for women. A female college slumber party scene in a film could be homoerotic, but it'll probably thought of FIRST as eye candy for male viewers. How men view something seems to be the cultural default...

(Though recruiting posters back in the day were aimed at men.)

I grew up seeking out homoerotic subtext because the mainstream wasn't yet portraying openly out individuals. Still, I refuse to believe that the first poster here, with the shirtless man looking over his shoulder with his hand wrapped around something at hip-height, wasn't exactly the sort of thing purposefully intended to reach out to gay men of the time.

It reminds me of looking at Leyendecker's artwork for the first time. The second poster actually is a Leyendecker print, which makes it even more suspect. From Wikipedia:

"...biographers have speculated on J. C. Leyendecker's sexuality, often
attributing the apparent homoerotic aesthetic of his work to a
homosexual identity. Without question, Leyendecker excelled at depicting
male homosocial spaces (locker rooms, clubhouses, tailoring shops) and
extraordinarily handsome young men in curious poses or exchanging
illicit glances. Moreover, Leyendecker never married and lived with
another man, Charles Beach, for much of his adult life, who is assumed
to have been his lover..."

[Replying to Yrro Simyarin below:] A complicating factor is, as the commenter bringing up Leyendecker points out, that some of those tales could have been coded to begin with, just to mention the genre of Western lit ("wild west", not "European") that pairs up lone male heroes (who then raise a child; one's "white", the other's "native", and the child's "mixed"), or the subtle indications in early detectives (loners, outsiders, eccentric). So are we over-thinking, seeing what was whitewashed to begin with, or have they always had multiple readings? With what we know now about some of these artists, I say the last.

How could these posters be perceived as gay?

"Accordingly, things that look very “gay” to us today,..."
How the heck do those posters look very "gay"?  Not seeing it.  It's just some soldiers.

Thanks for posting this. The Art Historian Michael Baxandall writes about this. He calls it the "Period Eye". Ways of seeing and interpreting images change over the ages.

I wonder if the fact these images show that gay men and straight men find the same traits desirable: young, virile, muscular, strong, etc. To me, a heterosexual, that would make sense a homosexual would be attracted to similar traits that I find admirable, but his attraction would also be sexual in nature.

It also shows how self-conscious about our own sexuality we have become in modern America, that anything showing something that could possibly be perceived as homoerotic is avoided by heterosexual men in fear of being seen as "gay". It reminds me of when people complain about grappling in MMA because it looks "gay." I can imagine it being homoerotic for some people to watch (just as it would be to see two women fight for me), but the idea that just because two men are wrestling on the ground is somehow instinctively homoerotic is ridiculous to me (especially if you consider the fact that they are trying to break each other's limbs - I doubt most people are that rough in bed).

This post reminds me of an old New Yorker cartoon; a man, his wife and another woman are in an art museum. While the man is peering intensely at a large painting of a bowl of fruit, the wife is saying to the woman next to her: “Oh, Henry will see a nude in anything!”

Some of the commentators express sadness at the loss of platonic male friendship/love. As a gay man I believe that this is a transitory period. As homosexual expression becomes less of a big deal the ability for all men of all orientations to express their affection for each other will actually increase.

We can see a similar pattern of male/female friendship without innate sexual expression has increased. This change has kept pace as women's sexuality and their place in the workplace have increased.

While it might not have been the intention of the Dept. of Defense to encode homosexuality in their recruitment posters, the artists are a different matter.

J. C. Leyendecker, for instance, was homosexual. His sexualized aesthetic finds its way into much of his art (here, and in the iconic "Arrow Shirt Man" ads-- the model was his boyfriend).  He was responsible for the pictures below. The eroticization of the male figure (even when clothed) cannot be missed. The attention to the posteriors of the servicemen (and the phallic missiles or flagpoles) scream "sex" (as the binoculars in two posters suggest voyeurism).

The Saturday Evening Post cover ("Welcome") puts the sexual anxiety of the new recruit front and center, as he nervously accepts the enthusiastic embrace of the other soldier. (Note how his ass, too, juts out and how their guns are intertwined.)

One final note.  The famous "I Want You" poster of Uncle Sam was modelled on a British one from World War I showing General Kitchener in the familiar pose. To bring the issue of military recruitment and homosexuality full circle, it should be noted that Lord Kitchener was, himself, homosexual (A contemporary journalist remarked that Kitchener
"has the failing acquired by most of the Egyptian officers, a taste for buggery.") Therefore, one of the most famous and effective war posters, in fact, shows a homosexual recruiting young men!!

As for the idea that the rise of homosexuality has ruined male/male friendship, put the blame where it really belongs, on homophobia.  Before religion(s) made it such a big deal, men could be friends and have sex or not have sex and really not base the decision on anything but whether they both wanted to or not.  It didn't "mean" anything except that they both liked it or one liked it and the other wasn't interested.

Someday we'll get back to the point where, after a day of roughhousing or hunting, one man can say to another with a wink, "Wanna?" and his friend can say, "Nah, let's grab a beer instead" and they'll just go get a beer...

The the mischievous leer with his eyebrows up like that, in the first one--why does he have his shirt off, holding a rod--inviting you to join the submarine service?  it's just is too much.  If you click on the slide show, you see drawings of muslcled men thrusting missiles around.   I think it's obvious that sex sells to everyone.  You need to advertise the armed forces to young men, you show strapping young men doing exciting things and sexually exciting things are exciting things too.   I'm positive that ads with attractive women doing sexual things like holding rods and leering over their shoulders in a sultry way sell products to totally gay men faster than ads with unattractive women reading books next to a dumpster.

But don't you think that the posters were probably made up by a creative firm - who might have had men who fantasized about men and so the imagery was a visal representation of their own inner feelings about other men.

I'd love some action from a marine!

I'd love some action from a marine!

This is not new, by any stretch of the imagination. Ever heard of the Theban Sacred Band in ancient Greece? And there is, was and always will be an undercurrent of homoeroticism in the expression of a masculine ideal. Presentation of a leader as not only powerful but sexualized and desirable is a lot older than George Bush's Commander Codpiece gig on the aircraft carrier. Naram Sin of ancient Mesopotamia did it a lot better when he declared "Mission Accomplished" in his victory stele.

This nuisance was anticipated.   I remember vividly a conversation that took place in the kitchen of a graduate-student dorm at Caltech in the summer of 1956.  Someone (probably I) had suggested that someday homosexuality would be taken as casually as heterosexuality was then.  One young man said, emphatically, that he hoped that would never happen:  It would cast suspicion on heterosexual buddies.  Two men traveling together would be subjected to the same speculations or assumptions as would afflict an unmarried man & women traveling together at that time.