A QR, or Quick Response, code on a bulletin board of a college campus: 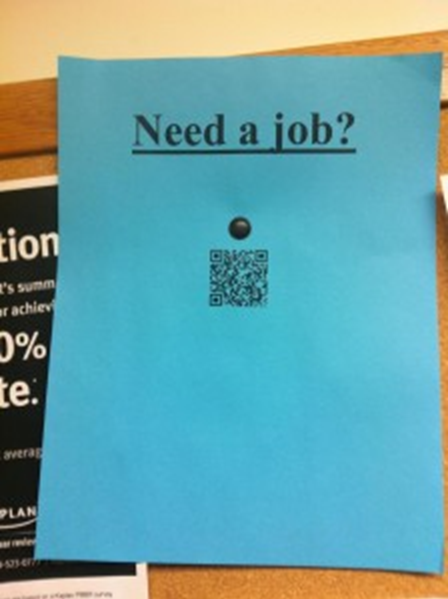 Steve Grimes shared this image and some interesting thoughts about how Quick Response codes, or QR codes, can contribute to inequality. That is, QR codes such as these serve to make certain content and information “exclusive” to those who have smartphones. He states,

There is a general thinking that technology can create a level playing field (an example of this is can be seen with the popular feelings about the internet). However, technology also has a great ability to create and widen gaps of inequality.

In a practical sense the company may be looking for students who are tech savvy. Using the matrix barcode may serve that purpose. However, the ad also shows how technology can exclude individuals; primarily in this case, students without smart phones. Ironically it is especially the students who need work (“need a job”) who may not have the money to afford a smart phone to read the ad.

Grimes’ thoughts are judicious, and reveal the inherent structural difficulties in alleviating inequality.  QR codes are one form of “digital exclusivity,” the tendency of technology to re-entrench (mostly) class disparities in access to information. Though they may be able to access the information later when they have access to a computer, the person who has the smartphone is certainly living in a much more augmented world than the person without.

If we take as our assumption that access to information is a form of capital, than we can easily see how such technologies are implicated in the field of power. We can also see how digital exclusivity can contribute to the larger digital divide. In this sense, digital exclusivity, as a characteristic of particular technologies and forums (in this case as an access-point to particular forms of knowledge and information), contributes to larger inequalities of power and access to information in the digital age.

QR codes, though, may not be the best example of a digitally-exclusive technology. That is, QR codes have yet to serve as a common conduit of important information—access to such information has similarly meant little in terms of social or economic capital. It turns out that even most people with smartphones don’t know what they are or aren’t interested in using them. Grimes’ understandable frustration the digital divide, combined with the uneven usage of QR codes among mobile phone-using countries, leads us to believe that those black and white squares do more to instill a feeling of digital exclusivity than anything else. 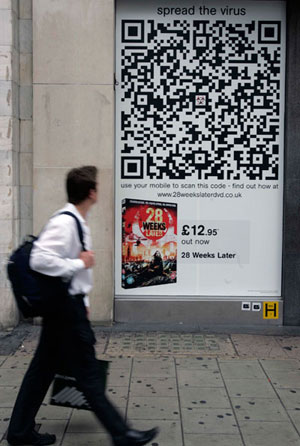 David Paul Strohecker (@dpsFTW) is getting his PhD from the University of Maryland, College Park. He is currently doing work on the popularization of tattooing, a project on the revolutionary pedagogy of public sociology, and more theoretical work on zombie films as a vehicle for expressing social and cultural anxieties.

David A. Banks (@DA_Banks) is a M.S./Ph.D. student at Rensselaer Polytechnic Institute.  His research interests include space, place, cyborgs, and networked bodies.  He is currently working under the NSF’s GK-12 fellowship program, teaching science in urban school districts and developing new learning technologies. More at www.davidabanks.org.

Strokecker and Banks both blog at Cyborgology.

I'd encourage you to look at the Pew research on mobile device usage, which would seem to contradict or at least complicate some of your assumptions here: http://www.pewinternet.org/Reports/2010/Mobile-Access-2010.aspx, among other reports. (Briefly, for those who don't want to follow the link, the use of mobile devices is higher among non-whites than whites and non-whites use more of their devices' features than whites.)

"Than" and "then" are not equivalent. Please learn/teach the difference appropriately.

I'm definitely an example of someone who isn't interested in using them, although I could.

I've seen them around my campus a lot, just like this, and just this semester.  It's so annoying.

oh, that's what those things are?

Am I the only one that is creeped out by those codes? It is all too apocalyptic and 1984ish to me.

What is a good measurement though, is the sheer amount if information that requires you to go to a website. Lots of people may hve computers now, but it's still far from all of them and even those who can afford computers and internet may for different reasons be unable to use them, even though they may sadly be the ones who benefit the most. Just try to get your 85 year old widowed grandmother into the habit, for example.

I think you're got this backwards:
It's not that people can't use the QR codes, its that they're being used WRONG by whoever made that ad.  QR Codes make sense as an adjunct to regular advertizing - they provide a nifty way to bridge the gap between the analog (paper) and the digital.  They are only as useful as there are people who are able to use them.  The folks who made the example job ad are idiots.

Even if I had a smart phone (which I
don't), there is no way I would visit whatever that QR pointed at.  With
no explanation, no human readable URL, and an ambiguous title . . .
chances are it's one of those stupid Herbalife multi-level marketers.
Worse, it could point to spyware or some sort of virus.

The QR code is just a high tech replacement for a pencil and paper to write down a URL or a phone number.  A QR is just a computer readable URL.

RE: Smart Phones
While it is currently true that not everyone has a smart phone, even dumb phones are capable of taking a picture of the QR code that can be decoded.  Moreover, the COST of smart phones is plummeting to the degree that soon anyone who can afford a cell phone will have a "smart" phone.  I've read that the "$99 Smart Phone" is either already here or will be here very soon.  Many people are replacing their Landlines with Cell phones, at roughly the same cost per month.  What that means is that pretty soon anyone who wants to have a smart phone will be able to afford to have one.

I have to wonder, though -
With the cost of internet enabled devices plummeting, how large IS the digital divide?  Modern Cell Phones have more power than circa 1980s PCs.  Almost anyone can afford one.  Isn't that democratizing "digital" more than ever before?  It seems to me that ubiquitous access to the 'net is realizable in the very near future.

ironically, this article came out today and I also received this from UChicago today: http://i.imgur.com/HLkh7.jpg

So where does the QR code lead you?

I'm job-hunting, myself, and I'm surprised that seemingly inclusive-by-mandate organizations like the federal and provincial government will blithely require that a candidate for an entry-level position have access to the newest versions of Microsoft Office (needlessly using macros that won't work properly in Open Office or older versions of Word when the same information could be conveyed by text), a webcam, or, even less comprehensibly, a copy of Adobe Acrobat Pro or SPSS.

So this article highlights one bad use of QR codes (they happen all the time) and then makes the case for digital exclusivity? Pretty hefty generalization if you ask me. I understand the larger point of digital exclusivity. However, pinpointing an emerging technology like QR codes was probably not the best choice.

I found the original (larger) image of the sample QR Code.
http://thesocietypages.org/cyborgology/files/2011/09/qr-code-digital-exclusion.jpg

I used an online tool to decode:
http://zxing.org/w/decode?u=http%3A%2F%2Fthesocietypages.org%2Fcyborgology%2Ffiles%2F2011%2F09%2Fqr-code-digital-exclusion.jpg&full=true

Boo-hoo, and a want-ad is prejudicial toward the literate.  See old saw, "life is not fair."

More people own mobile phones than toothbrushes.
The thing is, to be effective with QR codes you need to take into account that most people's phones have horrible cameras - they can't focus up close. This makes the majority of QR Codes marketers create less effective than they should be.
http://2vu.me/us

I just found out what QR codes were today, thanks to this article.  What's really upsetting to me is that on my bus ride home today, I saw an info-ad that said, "Educate Yourself! Get tested for HIV" and had a QR code. No phone number, no address, possibly a web address, though I didn't notice one, just a QR code.  Perhaps I have somehow missed the spread of QR codes, but I had no idea what it was at the time.  Also, unless I misunderstood, these codes can only be scanned by smartphones.  Smartphones are not so ubiquitous that an ad about a LIFE-THREATENING and INCURABLE disease should require you to use one.  Talk about exclusivity.  How anyone else had an experience like this?

[...] (“need a job”) who may not have the money to afford a smart phone to read the ad. Read more: thesocietypages.org Bookmark on Delicious Digg this post Recommend on Facebook Buzz it up Share on Linkedin Share on [...]

[...] in the Sociological Images blog, digital exclusivity, is ‘the tendency of technology to re-entrench (mostly) class disparities in access to [...]

[...] issues facing museums, the Sociological Images blog has discussed this issue of access as ‘digital exclusivity‘ in relation to job [...]