The Growing Wealth Gap Between Blacks and Whites

In addition to differences in income, there is a persistent wealth gap between black and white families in the U.S. The term “wealth” refers to all of your assets (the home you own, money in savings and investments, etc) minus your debt. According to a new research and policy brief by Thomas Shapiro, Tatjana Meschede, and Laura Sullivan, the wealth gap has increased from $20,000 in 1984 to $95,000 in 2007. 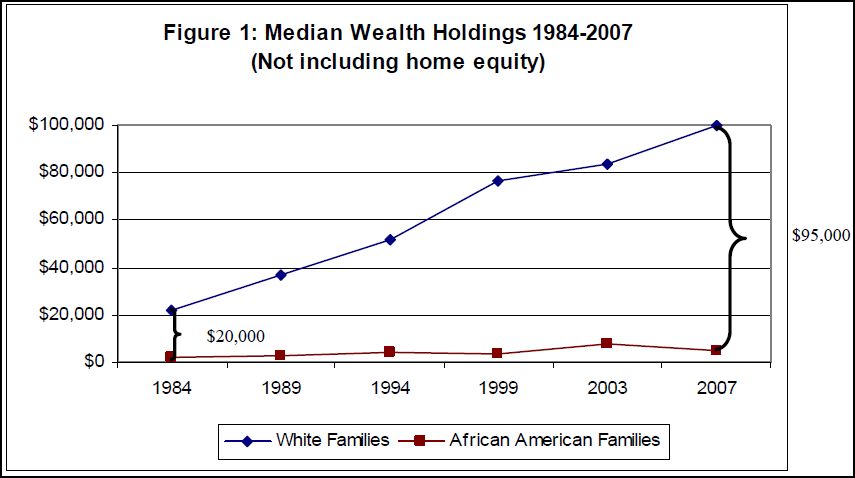 The authors explain the growth in the gap this way:

The [increase in the] racial wealth gap… reflects public policies, such as tax cuts on investment income and inheritances which benefit the wealthiest, and redistribute wealth and opportunities. Tax deductions for home mortgages, retirement accounts, and college savings all disproportionately benefit higher income families.

There are also much variety in how much wealth is held by people within any given race. The figure below, shows that the gap between high-income and middle-income whites has tripled since 1984. Both groups, however, have seen an increase in the amount of wealth they hold. 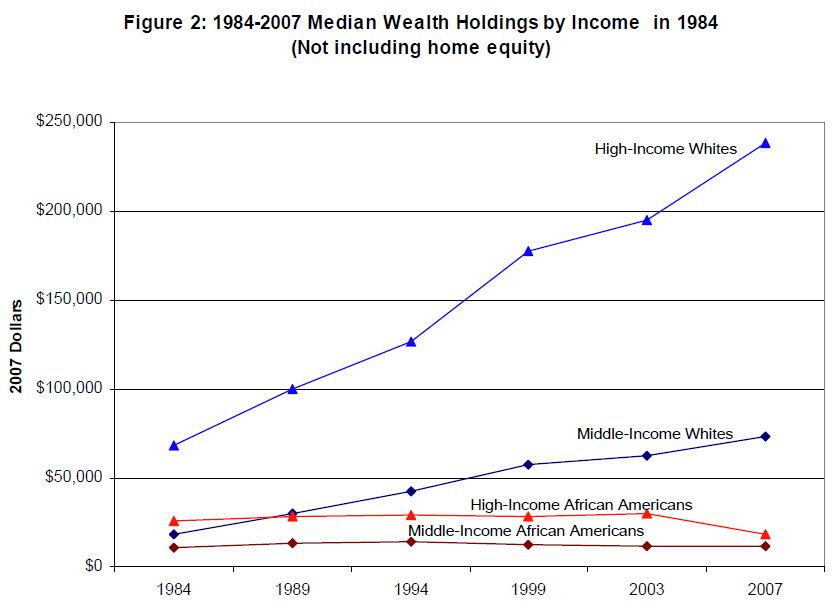 So why don’t we see an increase in the wealth gap among blacks? The authors point to “…the powerful role of persistent discrimination in housing, credit, and labor markets.”

For example, African-Americans and Hispanics were at least twice as likely to receive high-cost home mortgages as whites with similar incomes. These reckless high-cost loans unnecessarily impeded wealth building in minority communities and triggered the foreclosure crisis that is wiping out the largest source of wealth for minorities.

Public policies have and continue to play a major role in creating and sustaining the racial wealth gap, and they must play a role in closing it.

First off, "similar incomes" is not equal to similar risk. I can tell you that any financial institution that engages in any disparate lending based on race will be smacked down quicker than you can say Johnny Cochran. Even something that *looks* like it is avoided like the plague--at least among small-to-mid size institutions.

This is not to say that disparities don't exist, but if they do they are caused by other risk based factors that feed into the lending/pricing decision.

Pinning this on public policy is laughable. To really understand the problem some analysis should be done on credit scores, the spectrum of bankruptcy predictor metrics, foreclosure rates, etc among various races. Then some analysis can be done regarding why any differences would occur in lending.

However, wealth is not about homes and incomes. It's about behaviors in debt, saving and consumption. That's where the research should be.

It's an interesting catch-22 (at least if you're a person of color like I am). Because to say that it's all predatory lending, etc., is likely not true, but to dismiss that is to say that there's something inherently wrong with people of color in that they can't acquire wealth.

I will also say that I was shocked, SHOCKED, to do some work with impoverished communities of color and see just how much legalized inequality was there. I come from a perfectly middle class family--two cars, vacations every summer, etc...but also no 'wealth.' We had savings, but no investments...probably in part because my parents' parents were pretty much cut out of the investment game. No one was going to lend to your average working class black person in the south in the middle of last century. So my parents didn't learn that stuff, and now I don't know it either. All because of crappy practices half a century before I was born. This is not to say that I can't learn and then pass this info on to my kids, but it's going to be a much steeper learning curve than if stocks, real savings, tax breaks, etc. were part of my family's dinner conversation.

I might also be considered more of a risk to an investment banker because I don't have a portfolio, and thus, it may be more difficult for me to get on that path...all because of crappy policy that happened half a century before I was born.

At the risk of going too far off topic...what I am hoping to communicate is that policy, even policies that are no longer technically in effect, can and do have great impacts on people.

Do the authors control for different time preferences (preferences over current vs. future consumption) and (probably) different life expectancies (I will save more if I expect to live longer)?

I have heard conservatives, when talking about 2008's meltdown in the financial sector, bring up (without prior reference) Freddie Mac and Fannie Mae as the villains of that meltdown, financing mortgages and making loans to poor people who couldn't afford them. If pressed they will admit there were other factors/actors in the meltdown, but that (Democratic) government policy forced Fannie Mae and Freddie Mac to make the bad loans that destroyed the financial sector.

Now, to be fair, Fannie and Freddie did jump on the sub prime bandwagon late in the game (after 2005, I believe) and they are major players in the markets. But graphs and reports like the ones referenced in the post demonstrate how hollow the rhetoric of the conservatives is, and how much we need to do to address class and racial inequity in this country.

Mike's comment is interesting as well. He makes a couple of good points, although they need to be looked at skeptically. For example, he is probably right that any direct or obvious racist behavior in lending will get a bank in major trouble. However, that is not really a problem. Jenright indicated her family did not have any stock assets, I assume a relatively common situation among families of color. So when Realtors find out what assets an African American family has, they will steer them towards neighborhoods where the banks lend money based on savings but no stocks. In other words, as Jenright said, "legalized inequality".

I am not surprised Mike heaped scorn on public policy. I suspect he is a conservative and/or a libertarian, and wants to reduce government spending. But public policy is the only reliable mechanism available to the government to affect income inequality. It has done so in the past, and we need to do so again.

Let's be clear - these are not "public policies"...that's a whitewash. These are *conservative* policies put in place by a well-financed system of nepotistic privilege.

A troll upthread keeps steering this conversation into a highly selected set of statistics, none of which reflect underlying realities. These charts represent EXACTLY what institutionalized (and culturally internalized) racism look like.

Thanks Mike for the mansplanation. Or would it be whitesplanation? Anyway, I find it truly pitiful that you work in an industry responsible for such wealth gaps and you insist that it's all those damn minorities faults! I mean, if they were just more upstanding and responsible like white people, they would be so wealthy! Racism doesn't exist! Eleventy! How dare you ask me to examine my privilege?

In short, dude, you're not really giving me much reason to trust that loan companies and banks have the best interest of their customers at heart. You're proving the point you think doesn't exist.

[...] has surfaced stating that the wealth gap between Black families and white families is [...]

[...] the ones that have been left behind for decades.”  As income inequality, including the “racial wealth gap”, continues to rapidly expand, researchers have argued that the policies which have created income [...]