The Ubiquity of Gender Rules; Or Do Lesbians Have to Love Cats?

In my Sociology of Gender course I talk about how gender conformity isn’t simply a matter of socialization, but often a response to active policing by others.  Single women usually avoid having too many cats, for example, not only because they’ve been taught that too many cats sends the wrong signal, but because they may be called a “cat lady” by their friends (a joke-y slur suggesting that she is or will be a batty old spinster).  Or her best friend, with her best interests in mind, may discourage her from adopting another cat because she knows what people think of “cat ladies.”

People who find community in subcultures that are seen as “alternative” to the “mainstream” often feel like they are freed of such rules.  But these subcultures often simply have different rules that turn out to be equally restrictive and are just as rigidly policed.

A recent submission to PostSecret, a site where people anonymously tell their secrets, reminded me of this.  In it a lesbian confesses that she hates cats.  Because of the stereotype that women love cats, the “cat lady” stigma may be lifted in lesbian communities.  This lesbian, however, doesn’t feel freed by the lifting of this rule, but instead burdened by its opposite: everyone has to like cats.  So she feels compelled to lie and say that she’s allergic. 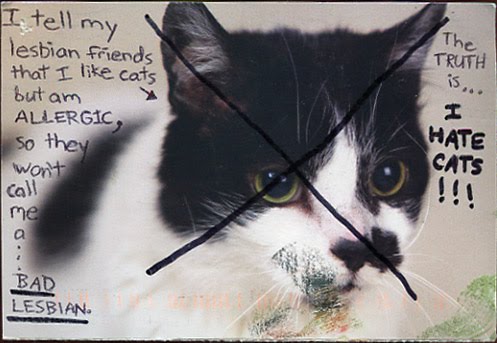 Related, see our post on a confession, from another lesbian, about suppressing the fact that she’s really quite girly.

At least anecdotally from my experience, it seems a lot of LGBTQ people do like animals (Boston Pride, for instance, usually has at least half a dozen animal welfare organizations represented) and there was an interview with Rita Mae Brown that I can't seem to find at the moment where she theorized that many LGBTQ people like animals because they don't judge and love unconditionally, which is something a lot of LGBTQ people can't get from the people in their lives.

Of course, I don't think I'd ever say that everyone has to like animals or they're a "bad lesbian" or whatever, but at the same time I get a bit put off whenever anyone says that they hate a particular type of animal. If I knew this person I'd be a little more concerned over their apparent hatred than their lack of liking cats. At least to me that tends to be a red flag that there might be more to this person than meets the eye, and not in a good way. Indifference comes from a very different place than hatred, and I much prefer the former to the latter.

I thought the stereotype was that all lesbians loves dogs.

I'm not a lesbian, but something seems very fishy about this PostSecret.

Plenty of lesbians are not "cat people" (for example, I've met many such dykes while walking our respective dogs). But most cat owners - lesbian or not - are taken aback or offended by people who claim to "hate cats."

The imperative to tolerate the presence of cats is rigidly policed by the cat-owning community, but only to the extent that the community's activities take place in private homes, which are basically ruled by cats.

If I were Miss Manners, I'd applaud the postcard-sender for her polite and considerate white lie in the presence of cat enthusiasts and remind gentle readers that it is usually a bit of a faux pas to claim to "hate" anything in the presence of people who might love it. I avoid telling most parents that I hate kids for the same reason, and the "I'm allergic" excuse isn't working out so well...

Edit: this was supposed to be in reply to Yrro Simyarin, but something went wrong and it wound up here instead.

In some cases "cat owning" can be pretty important to someone. My (straight) roommate, for instance, was told by her dad when her cat got sick that she should just put him down and get a new one, and her response was that it was the equivalent of someone saying "Oh, you can just get a new kid!" In that sort of situation telling someone you hate cats probably will be taken personally.

And you're right, there's a difference between disliking something someone else likes and being actively hostile towards it, but I get the sense the poster is more of the latter. To her credit she seems to be aware of these things enough to keep her mouth shut, but the sentiment seems to be there.

Can't women avoid having too many cats because they don't have the space or that they're expensive to care for?

I can hardly wait until you find and blog about a PostSecret card from a black person who says they pretend to like fried chicken and watermelon so their friends won't think they're a bad black person.

[In case that's going over your head, Lisa Wade, instead of calling into question this person's idiot stereotypes about lesbians, you are holding it up as some kind of "truth." You've done this before, had it pointed out, and yet you continue. I'd call that ignorant, at best, and phobic at worst.]

Well, it is possible that this particular persons' subculture is into cats, but from what I can gather from this and the last lesbian themed PostSecret (as well as my own experiences at Pride), it seems that putting a pin on lesbian norms is a very problematic thing to do. First of all e're talking about queer people here, a group that is defined by individual charactaristics, not a common community or culture. Secondly, the main communication and community for queer people on a scale that is more than the immediate community is eaten by gay men, meaning that lesbians are rendered pretty much invisible to each other as well as to others - there is simply no high authority that settles norms on a larger scale. I went to a women's party only last week that had strippers - something that made me, as a lesbianish woman living most of her life in a small university town, nearly have my eyes pop out in disbelief. The party also happned to hold the largest collection of butches that I can recall.

Maybe it's different when you live in a big city and finding a community and sustaining it is easier, but my point is that lesbian culture seems to be much more about cells that occasionally intersect than about an overarching norm. Of course there could still be common denominators and the local norms can be smothering, but it would be a mistake to write details like this as universal.

While this particular lesbian feels that she'd be called a 'bad lesbian' if she stated she disliked cats, that's not evidence of social policing. As another commenter noted, it's a bit like a black person saying they're worried other blacks will think they're bad if they don't like fried chicken.

How many lesbians feel this way? Has this lesbian ever been called a 'bad lesbian' over her dislike of cats?

I've also found the LGBT community to be rigidly policed . . . but not so much about animals as about politics: you must assume all politicians with a (D) after their name are friends and all with an (R) are foes, lest you risk being ostracized. No room for evidence to the contrary; no room for putting prejudices aside for a moment.

I have heard absolutely nothing about either of these things, the cat thing or the hiding being girly. Do I hang around the wrong lesbians ;D?

i dont see what the big deal is. loving and hating cats just depends on the person and not who they like to have sex with or what click they hang out with.its sort of funny with me and my boyfriend because we have two dogs and a cat and people who didn't know us before we got together think that the cat is mine and the dogs are his when in reality it is quite the other way around.

Just last night I was talking with my girlfriend about my (minor) internal conflict about my hair.  I've let it grow out some, and it's no longer a haircut that screams "DYKE!"  I like it this length, but I don't want anyone assuming I'm straight.  (Loved the aspirational hair poster!) I feel pressure to conform to lesbian stereotypes all the time, much of it internal.  Staying outside the closet is hard.

The animal angle is interesting and (I think) pretty valid, although I'm more used to lesbians with dogs than with cats.  I was always a bit of an odd one out there.  Still, queers in general seem to have a lot of animals, and lesbians more than gay men, in my experience.

Well: I had heard many people say: "Oh you know lesbians and cats!" and since I love cats and I'm gay I thought oh well then must be true. But lo and behold when I think of it I know more gay folk (both sexes) who have dogs than those that have cats...soo not so sure how the numbers add up! An experiment for someone to do? hehe