Deeb Kitchen sent in an essay at The Brookings Institution with a graph comparing the number of hours worked and earnings in middle-class, two-parent households (the 10% of households that are in the very middle of the income distribution).   Controlling for inflation (results are in 2009 dollars), we see that these households are earning more, for sure, but also working more.  In other words, they’re getting about as much buck for their bang as they were in 1975. 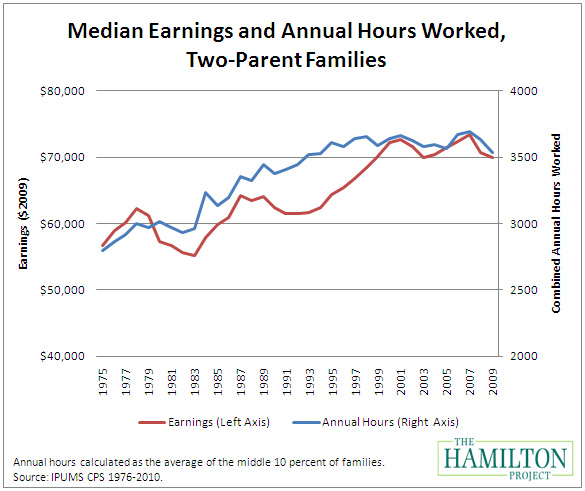 The authors of the post argue that the 26% increase in the number of hours worked is due mostly to mothers increasing their work hours.  Wages, as you can see below, have been stagnant for fathers, but gone up for mothers: 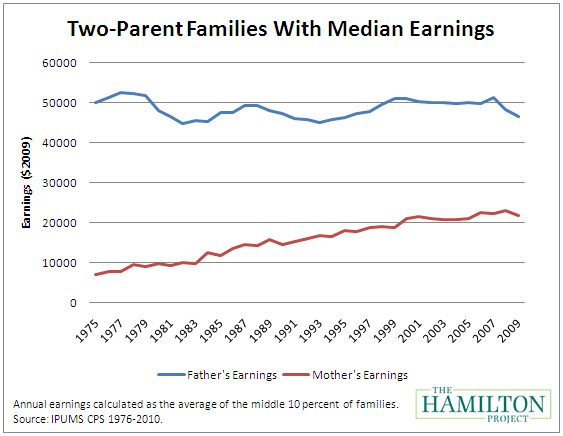 Givent hat we see that hours worked have been increasing, and it's not unreasonable to guess that most of the new hours are coming from women ("mothers" in this case, I guess), who are increasingly working outside the home, it makes sense that their average wages are also increasing, concomitant with their incresing numbers of actual workers. It's pretty clear that the women's median earnings includes women who have no personal earnigns, and it's not really fair to compare the two groups' changing median wages (women and men), unless you're controlling for hours worked. aLl this tells us is that when women work more hours, they also make more money (but not necesasrily more money/hour), and that since men have been working full-time at a consistent rate, their wages have thus not changed. It's just not all that meaningful.

Makes me curious how much of an effect the increased number of women working has had on wages in general. In theory, if your labor supply doubled over that short of a span, it would drive wages down.

The heading should read "different-sex two-parent families with median earnings" since that's obviously the data set their using if all the families have a mother and a father.

I wonder if the top graph has a scaling problem? Doing quick math based on end points in the graph, it looks like wages went up 23% while hours climbed 29%, but the slopes look the same in the chart due to scaling. I think we would draw different conclusions if the slope for hours was shown as 27% steeper -- one could argue that people are actually working more hours, and getting paid less and less for their time.

Best of 2011: Recession Proof Companies, Americans Move in with Relatives, and Other Economic Stories « Welcome to the Doctor's Office — December 29, 2011