Why Did Married Mothers Go To Work?

Claude Fischer, at Made in America, argues that the biggest change of the last 50 years is the increase in the number of mothers in the workforce.  From the beginning of last century till now, that rate has accelerated precipitously: 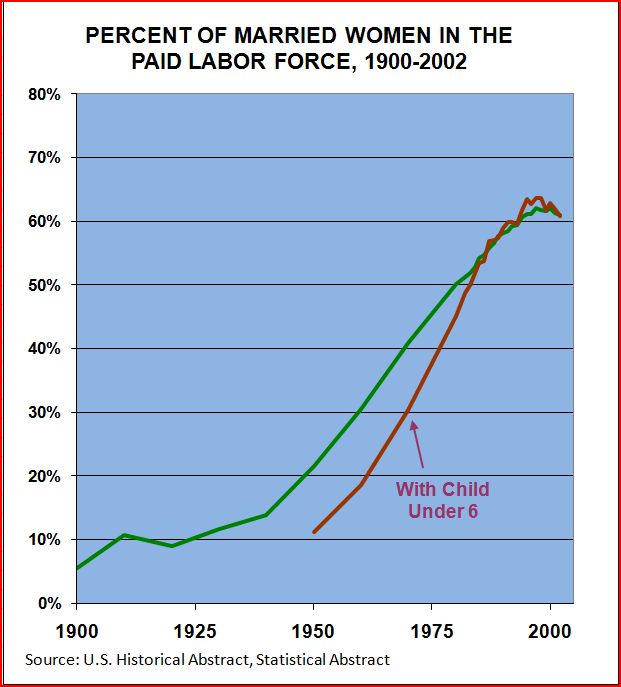 While some women have always worked (at unpaid housework and childcare, selling goods made at home, or in paid jobs), most women now work outside of the home for pay.  So long “traditional” family.  Why the change?  Fischer explains:

First, work changed to offer more jobs to women. Farming declined sharply; industrial jobs peaked and then declined. Brawn became less important; precise skills, learning, and personal service became more important. The new economy generated millions of white-collar and “pink-collar” jobs that seemed “suited” to women. That cannot be the full story, of course; women also took over many jobs that had once been men’s, such as teaching and secretarial work.

And married working mothers changed the economy as well.  Once it became commonplace for families to have two incomes, houses, cars, and other goods could be more expensive.  Things women had done for free — everything from making soap and clothes, to growing and preparing food, and cleaning one’s own home — could be commodified.  Commodification, the process of newly buying and selling something that had not previously been bought and sold, made for even more jobs, and more workers, and so the story continues…

you might want to comment on the fact that this is about married mothers only. that's obvious from the chart title, and maybe it's supposed to be obvious that single mothers have to work, but i wouldn't want to imply that to be a mother is necessarily to be married.

i wonder about how other changes in family structure - unmarried women, divorced women, queer women - affect the overal statistics about women in the paid workforce.

I do not have a source for this, but the American economy is INCREDIBLY deceiving. Inflation keeps doing what it does, but wages aren't keeping up with that. For middle and working class families to continue to maintain their standard of living, or even to maintain their survival, women HAVE to work. This is especially true of mothers. If a married adult couple falls on hard times, that's only 2 mouths to feed, it's easier to deal by drastically changing their lifestyle (moving into a 1-bedroom apartment from a 2-bedroom house, for example), but that's not always possible with children depending on you.

And frankly, the dismissal of "some women" working but it still mostly being "women's work" or "from home" is a trope I see in these discussions that bothers me. The idea that women were mostly housewives until around the 1960s is a VERY demographic specific idea. Women of color, working or lower class women, and immigrant women have ALWAYS had to work in this country. The cotton fields down south had just as many female sharecroppers as male sharecroppers (not to mention, women were never given a break during slavery). If you read DuBois "The Souls of Black Folks" there is an anecdote about a poor black town with some few dozen women, almost all of whom were working as sharecroppers, though one was a teacher and a tiny handful were housewives. The factories of the industrial era were packed with immigrant women and poor women migrating to cities from rural areas. That isn't ancient history, either; my grandmother and her sisters, as well as my grandfather's sisters, ALL had jobs upon completing school (my grandmother was a seamstress and a clerk, her sister was a bank teller, my grandfather's sisters were teachers, etc). Dismissal of working women prior to a certain point is a pretty distinct dismissal of women of color, immigrant women, and women of low socio-economic class. Which is pretty typical in these discussions, but fails to take into account enormous, enormous populations of women. I also have a suspicion that this graph isn't totally taking into account domestic workers such as maids and nannies, who are often paid under the table, are often immigrants, are almost always women, and have been around in huge numbers for a long time.

Also, "paid work" and "working from home" aren't mutually exclusive, nor are "child care" and "paid work." Part of the reason there may be such a drastic perceived difference is not that the women working from home were not paid, but because they weren't receiving an official paycheck from an accounting department for the government to take taxes from. Plenty of people I know run unofficial day cares from their homes, or do hair from their living rooms, or something.

It is my understanding that between 1945 and the 1970s, the idea of women as happy queens of their house was socially constructed, based a lot of publicity and the new TV. However, few women were truly satisfied at staying home with little ones, being able to socialize only with their neighbours (not chosen and not real friends), and more or less being 'stuck' at home in the suburbs. I don't have the data to back it up but I read that there were never as many women as during this period taking Valium and being unhappy. All this to say that am not sure that the number of working mothers is solely an economic fact and the product of consumerism. Cowan has written a book, More work for mother, that takes on this topic - women were made to believe that motherhood and being a good wife were sufficient to satisfy them... Women probably entered the working force in large numbers because they needed more, and the acceptance of individualism (as in, individuals are allowed to exist) plays a much larger role in this phenomena than the economy.

What I think is interesting is actually the ending of this piece. Dr. Wade makes the point that because women were out working more goods and services were comodified. While I agree with that statement, I think that there were a lot of goods that had been comodified previous to mothers entering the work place. Certainly by 1947 (?) when the numbers began to skyrocket most household goods had been comodified.

I'm actually pretty surprised that 35-40% of married women AREN'T working outside of the home. I know a few married women who are on SSI, but none who could afford to stay home otherwise. I must be sheltered and/or it's cheaper to live in other parts of the country.

The destruction of the extended family means that a smaller unit of adults needs to provide enough material resources to support an entire household.

Our socially required material resources have expanded drastically.  I don't mean TIVOs and rec rooms.  I mean quasi-legal requirements enforced through rental and building codes, school standards and requirements, and social services standards.  For instance, you're required to have a certain number of bedrooms per number of children (in many places, if a single mother has a son and a daughter, she cannot rent an apartment with less than three bedrooms; if she lives in a trailer on the back 40 of her parents' farm and a social worker learns that she has only two bedrooms, her kids could be removed from her care until she rectifies the situation) and a functional modern bathroom, no outhouses and washbasin baths.  Unless you're Amish, you'd better have electricity, a working refrigerator and stove and hot running water or you could lose your children.  You're required to have a certain amount and quality of clothing to be considered a non-negligent parent (try sending your kid to school without shoes these days, or a too-light coat in December, or the same outfit every third day because you only own three sets of clothing).  Try explaining to social services that you bed your kids down on a pile of hay or a straw-ticked mattress the way our great-grandparents would have done.  Your house better be heated, no bundling up in sweaters and mittens at home on a chilly day.  80 years ago, any of these things might have been considered less than ideal, but common enough that if you fed your kids, kept them and your house relatively clean, and sent them to school, you were doing a good job under tough circumstances.  Today, you're the bottom of the barrel and subject to censure.  Caroline Ingalls would probably be in jail today for neglect.

Society changed. We are allowed to go to school. We are allowed to be single and live on our own. We are allowed to have careers. I think most women meet their husbands after they've already committed to their careers nowadays, so it's not like "OMG we have a bunch of kids we can't afford I better get a job!" Or maybe that's my privilege speaking. I met my husband at work and after nine years of marriage we had a child, so even though I'd been working the whole time I'm pushing these numbers up.