What if Anthony Weiner had Been Female?

Something has been nagging me about the Representative Weiner (D-NY) sexting scandal: how would this story would play out differently had the sexting-congressperson been female? I wrote earlier about how differently “sexy” pictures of male and female political candidates are handled.

When Krystal Ball ran for congress, images of a past Halloween party became some of the most Google’d images in the world, unlike male politicians running for office at the same time who were also involved in scandals about images of their past behaviors. The images of women in general, and, in this case, female politicians, become poured over, detailed, dissected, analyzed and obsessed upon to a far greater extent than what is occurring with Rep. Weiner. Yes, the images he sent are being shared on and offline, but had Weiner been female the images might be shown akin to the Janet Jackson “wardrobe malfunction”: the media would scowl at the perversion while simultaneously showing them on a constant loop, dissecting every pixel in detail.

So let’s do quick Google Image searches for Krystal Ball and Anthony Weiner. (In these screenshots I am logged out of Google and “SafeSearch” is off, however, neither of those factors influenced the results much). 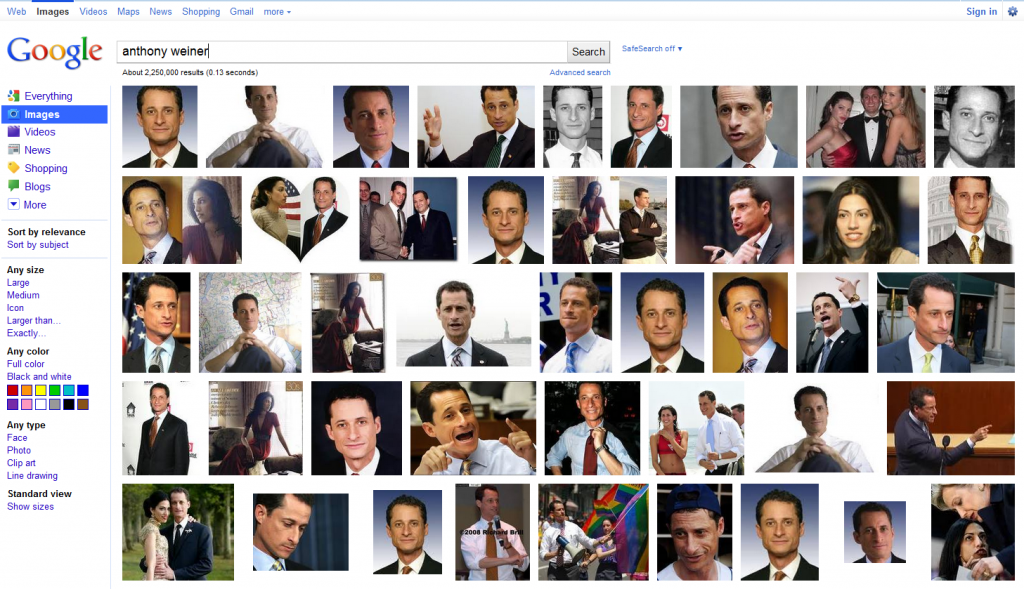 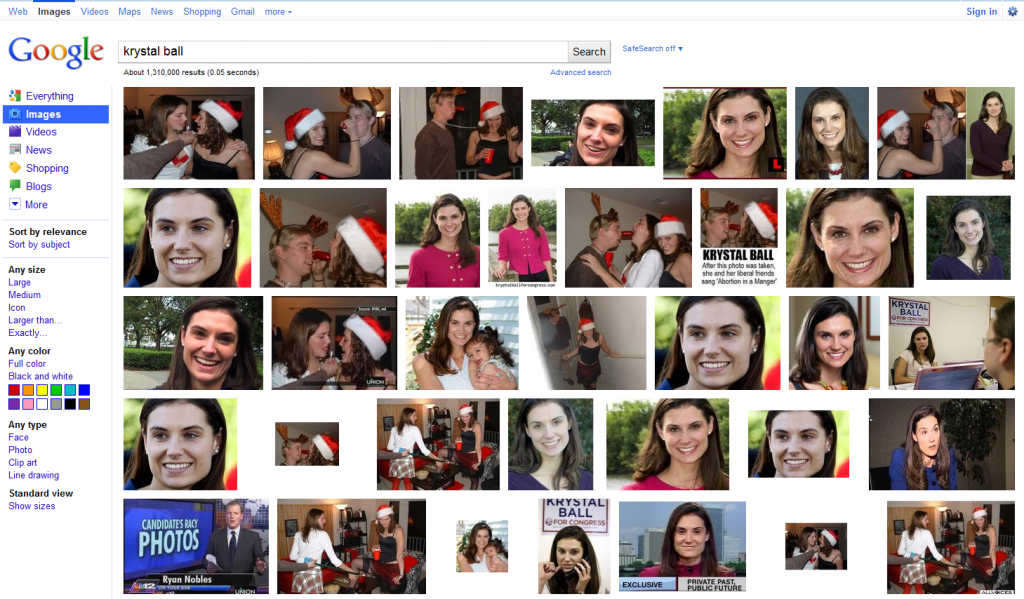 Krystal Ball’s results are dominated by the images that caused scandal. You have to scroll through pages of images in Weiner’s results to find the “offending” images. Given that Google’s resultsare based in part on popularity and website inter-linking, we have to wonder how Weiner’s post-scandal online presence would be different had he been female. [We should note that Weiner had a larger online presence before the scandal than did Ball. However, many of the top images in the search are post-scandal, so that is not a complete explanation for the discrepancy]. In fact, it is easier to find women showing skin in Weiner’s results than the so-called “lewd” images themselves.

Even Sarah Palin, who has never tweeted “lewd” photos of herself to all of the Internet, has search results more focused on her body than does Weiner. 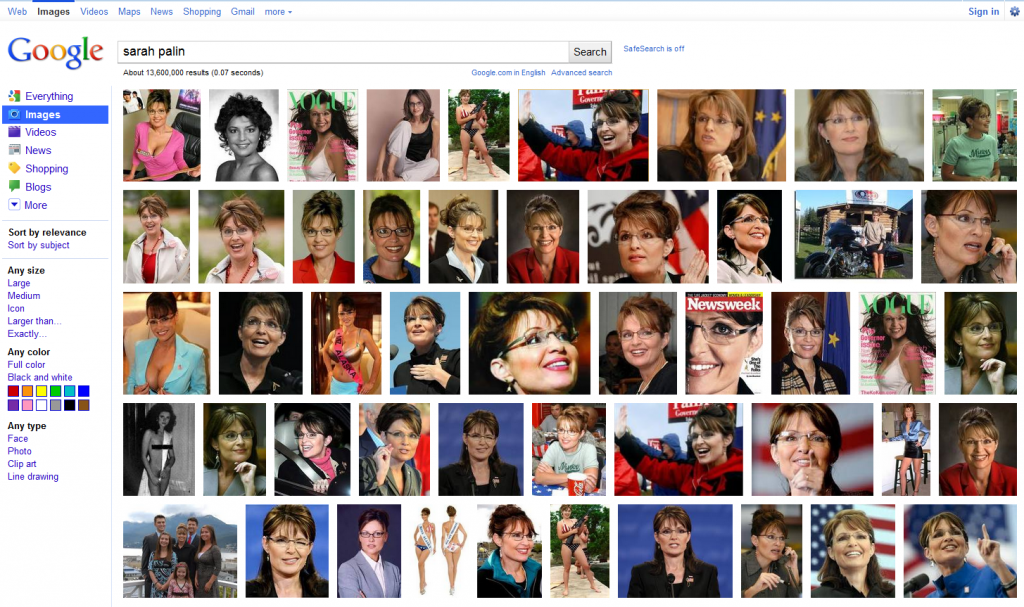 Michel Foucault noted that sexual repression is closely related with sexual obsession; and the obsessively prying “gaze” is really the regulation and controlling of ourselves and our sex. The relative lack of obsession of the images in this scandal strikes me as evidence of the weaker regulation of the male body and men’s sex.

How else would this scandal play out differently had Rep. Weiner been female?

Please welcome guest blogger Nathan Jurgenson.  Jurgenson is a graduate student in sociology at the University of Maryland and co-edits the Cyborgology blog.

This post is the first time I've ever heard of Krystal Ball.

The Weiner/Ball comparison is not entirely fair - Krystal Ball, a one-time candidate, has probably had comparatively fewer news stories with her image than Weiner has as an elected official since 1992 and a member of Congress since 1999 (18 of those years weiner-free). The only reason she was ever a story outside of Virginia is unfortunately, because of those photos.

The Palin/Weiner comparison is absolutely infuriating.

My impression was that the Weiner photos were too explicit to be widely covered on most political sites. Whereas the Ball ones were the kind of goofy embarrassing that can get covered everywhere. E! may show plaster pixellated versions of these kinds of things all over their sites, but I doubt CNN would to the same degree.

Just as an interesting data point - I ran the same search for all of the sitting women senators, and none of them had any more skin pictures come up than Weiner. Maybe it's just a Palin thing?

So that just means people who use Google are more interested in naked ladies than naked dudes.

Does that make the Google user base inherently sexist? Is there more people attracted to lady-folk using Google than their are those attracted to guy-folk?

Or is Rule 30 correct, in that their are no [heterosexual] girls on the internet?

I don't think it's this exactly. I think it has to do with the gendered nature of sexuality and the right to feel desire and be desired. Figleaf said this here http://www.realadultsex.com/archives/2009/01/shorter-no-sex-class-paradigm

1. It is simultaneously inconceivable and intolerable for a woman to have sexual desire.

2. It is simultaneously inconceivable and intolerable for a man to be sexually desired.

Discussion: At least in contemporary western society every gender-related ill derives from some combination of items #1 and #2.

The Anthony Weiner scandal outrage is both #1 and #2 and the lack of pictures is evidence of this IMO.

Um it's happened to a woman in Ireland just recently. MP (member of parliament) Iris Robinson, 60, was 'discovered' having an affair with a 19 year old male cafe owner. She was caught out giving him 50 thousand pounds. Also, her husband is also an MP!! It was a HUGE scandal. Guess what, she was taken off to the loony bin (for psychological problems and exhaustion) and just recently made her first appearance in public. Hubby stayed with her. Here's some links to a variety of papers about the story. It has to be said, sociological images can be very very USAcentric....
http://www.time.com/time/world/article/0,8599,1952511,00.html
http://www.dailymail.co.uk/news/article-1241545/MP-Iris-Robinson-60-affair-19-year-old-toyboy.html
http://www.telegraph.co.uk/news/uknews/northernireland/6948341/Iris-Robinsons-lover-named-as-Kirk-McCambley.html

One pores over documents, not pours.

If you look up images for Rep. Chris Lee, the first ones to come up are the shirtless pics that led to his resignation. So, I'm not sure how accurate this post may be. Interesting, Sarah Palin seems to be the only one with doctored photos and not real ones. What does that say?

On another note, I don't know if all the Weiner pics were sent consensually to these women.. If not, he should resign for sexually harassing women. If so, then we (as a society) really need to get over it. Both men and women are VERY sexual beings and monogamy is virtually impossible for our species. That is not to say that a person can’t LOVE someone and want to commit to them, but don’t we already know that love is not sex and sex is not love!? What Weiner did is not unusual or different from most people having emotional or physical relationships with a variety of people (although it’s been interesting to see how new technology has played a role in the hype of this scandal). I wish the media, and those “outraged” by this would get over it. This is between him and his wife. Period. The only reason this would affect his ability to legislate is because the media won’t let it go. He can send naked pics to half the country (again, only if they want them and are consenting adults), and unless it takes up so much time that he can’t do his job, why does it matter? Our bosses, colleagues, students, teenagers, coworkers, neighbors, friends and relatives are all doing (or have done) some version of this (with or without technology). How high does the divorce rate have to go and how many “scandals” do we have to witness before we realize that human beings are sexual animals - Women and men. We need to take some lessons from our sexually expressive ancestors and closest primate cousins (the Bonobo) and let people flirt; send naked pics, talk as sexy as they want to; and, yes, even have sex with as many people as they want to without the rest of the country going nuts. For more information about our ancestors, I recommend reading Sex at Dawn by Ryan and Jetha...

Update: pictures released today of Rep. Weiner in the gym semi-nude are now appearing on Google Images - and this is with SafeSearch on Strict! http://img545.imageshack.us/img545/572/weiner.jpg

I agree with the commenters who think the comparisons aren't fair. While I think the author is definitely on to something, Anthony Weiner is a well-known and active politician, whereas the same cannot be said for Krystal Ball...and I don't know what to say about Sarah Palin. As someone noted above, when you look up Chris Lee, you get his racy photos, and when you look up every other woman in Congress, you don't get any racy photos.

[...] This blog post was originally published by Sociological Images [...]

Gender and Political Sex Scandals – The Blogs at HowStuffWorks — June 14, 2011

[...] the fallout that occurred when party photos of congressional hopeful Krystal Ball leaked online? As Sociological Images pointed out, it doesn’t even take a sex scandal to ruin a female politician’s career. While young [...]

[...] Images explores the policing of male and female bodies in this post about the Anthony Weiner scandal. In what ways does that scandal help us understand why Gerber may [...]

“Glad I Didn’t Have Facebook In High School!” #InterestingRead | Welcome to the Doctor's Office — November 26, 2012

[...] of her at a college party became some of the most Google’d images in the world, which might discourage some women from running for office. Let’s get realistic about the fact that most everyone has photos that [...]