“Some Men Just Need to be Slapped”: Policing Masculinity

Mimi S.-L. sent in a Brut ad that is a particularly non-subtle example of the policing of masculinity and denigration of things associated with women: 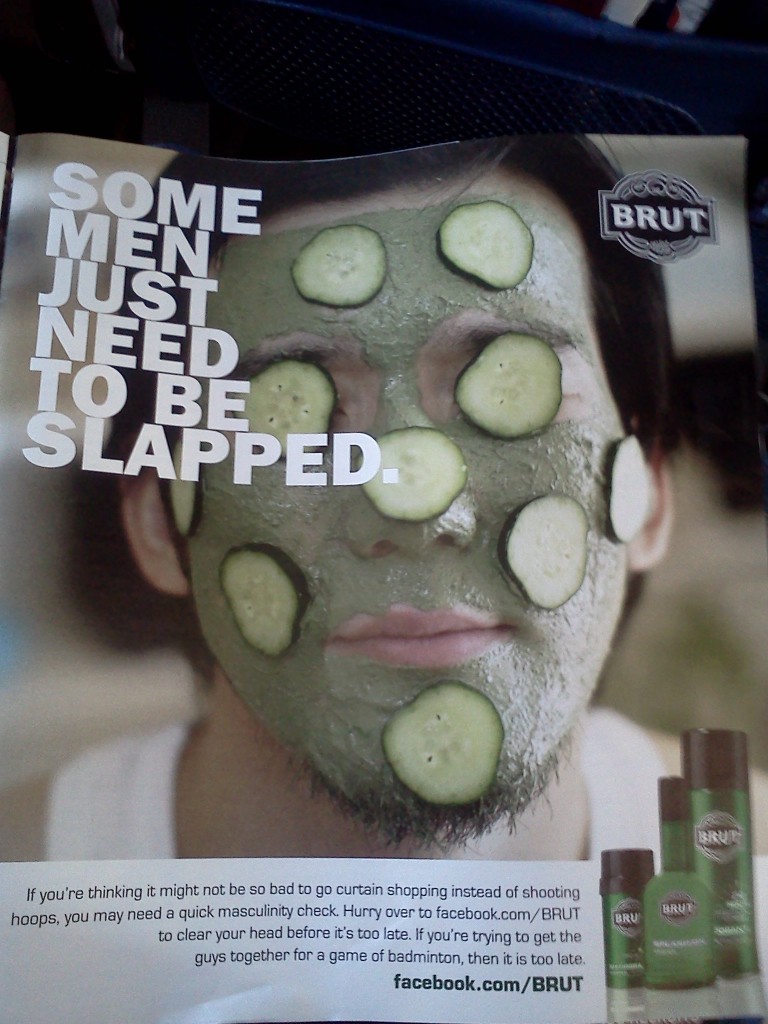 If you’re thinking it might not be so bad to go curtain shopping instead of shooting hoops, you may need a quick masculinity check. Hurry over to facebook.com/BRUT to clear your head before it’s too late. If you’re trying to get the guys together for a game of badminton, then it is too late.

I had no idea badminton was so feminized that playing it is a sign a man is truly beyond repair. Learn something every day.

For more on this ad campaign, see our earlier post on Brut’s “Slap Me” game on their website, white allows you to slap men who don’t meet masculine norms (their Facebook page lets you slap everyone from a hippie to a Star Trek fan to guys meant to represent Kelsey Grammar and Tiger Woods.

Why are there cucumbers all over his face? Brut fail for gender policing and for pretending to not know what the cucumbers are used for.

This is interesting. From Brut's website, on "What is a BRUT Man?" Second and third bullets ..

# He is a man who believes in equality and being true to yourself. He is not driven by what others think of him. His determination and self-worth is motivated by staying true to himself and who he is. He accepts responsibilities for his actions, is comfortable with his decisions, and isn’t concerned about what other people think.

# He is a man who sees possibilities and makes them happen. Who is always respectful of the opposite sex. Who understands the code of the gentleman and who is at ease with and courteous to people even though they’re different from himself.

I know this is beside the point, but I'd argue that wearing what is essentially perfume, is pretty darn girly in and of itself, Brut.

But seriously, I find that beyond the ridicule of not adhering to strict gender performances, the violent rhetoric that goes along with this is particularly disturbing.

Yes, this is something I've found very disturbing in recent years. I noticed it primarily with Chevy's truck commercials featuring Howie Long, flat-topped gender cop. He would smirk at girly-men right and left who apparently bought less manly trucks. Though I'm proud to be nothing like Howie Long, this promotion of the narrowest view of he-man masculinity makes me angry and sad.

And you BETTER not be gay, or you'll REALLY get assaulted!

That's the extrapolation I'm making here, Brut. Even without that, Brut: you are absolutely vile.

I find it strange that they chose slapping instead of punching or kicking. Isn't slapping a 'girly' way of fighting afterall?

I'd say it's between Brut and Miller Lite's "MAN UP" campaigns for the Worst Gender Policing Award in Advertising.

Brut had the early advantage, but Miller Lite just released their lifeguard commercials...

Well, you don't get to physically tackle or otherwise hurt other men in badminton. How girly is that? Because we all know that the essence of being a man is aggressive physical contact with other dudes.

Oh, and badminton is a sport that is really only played by Asians. And since Asian men are not really "real" men, I guess that's the clincher.

but badminton has a shuttleCOCK

It's particularly amusing that Tiger Woods and Kelsey Grammar are among those targeted by Brut. I assume that the implication is that Tiger is less of a man because he apologized for cheating on his wife. As well, one of Kelsey Grammar's most famous roles is the submarine captain with "WELCOME ABOARD" tattooed on his penis! Brut must have a confused notion of masculinity indeed.

"Launched by the design house of Michael Jordan in 2004, MICHAEL JORDAN 23 is a men's fragrance that possesses a blend of magnolia, grapefruit, musk, geranium, fig leaves, watermelon, and black currant."

So I ask you, do you think that REAL MEN desire to give off the fragrance of magnolia blossoms and geranium flowers?

Michael Jordan seems to think so.

What if you have to go curtain shopping because otherwise the hordes of hot bikini-clad heterosexual beauty queens from the tri-county area will drool all over your window as you're bench pressing 350 pound anvils with heavy metal playing at full blast on the stereo next to your fridge full of sausage, carburetor parts and Monster energy drinks?

In spite of all that we've done to recondition men, this is how they react: By lashing out. The law of unintended consequences. I predict it will get worse before it gets better.

This is scary. gay men get assaulted, trans women get murdered, and these people wants men to bring out the fists at the first sign of not acting like an 80's action hero? I don't think I've met a single man who'd have been able to avoid a black eye on regular basis in that case. I wonder what it does to men's mental health that they're put under such unrealistic expectations by such a serious threat?

Certainly Brut knows who it is selling to. I think it would be interesting to know what the demographic is of people who do all these things and buy cologne that doesn't smell that great and that any high schooler could afford.

BRUT: an eau de douchebag for every occasion.

That is not how cucumbers are used in facials, and if you slap him you will get goo all over your hands.

Imagine if this was reversed.

"Some women just need to be slapped."

There'd be an utter shitstorm. Why is this blatant double standard accepted? Violence is not okay, whether or not it's to males or females. The perpetrator, if female, should face the same public outrage as would a violent male.

I'm not anti-feminist, I'm for true equality. This ad makes me sick.

Some women just need to be slapped: Policing femininity: http://regender.com/swap/http://thesocietypages.org/socimages/2011/04/27/some-men-just-need-to-be-slapped-policing-masculinity/

[...] to Sociological Images for posting on the brand’s “Men Just Need to Be Slapped” campaign. Engaging in [...]

If you don't like it, tell Brut– I saw I'm not the first to express my disappointment on their Facebook. (Until now, I'd liked their products for not being caught up in oppressive gender dynamics. Oh, well.)

[...] Non-subtle example of the policing of masculinity and denigration of things associated with women. [...]

I'm a lesbian (and we have a whole other ballpark of issues to deal with), so I may not be one to have the authority to speak out on this subject, but here goes:

If men who are hyper-masculine, highly-gendered, anti-feminist and anti-feminine stopped getting attention/sex from women who perpetuated and fawned over these stereotypes, perhaps they would change how they acted. It seems to me that an excessive amount of straight women complain about and put up with these traits of macho-bullshit, almost as if they're to be expected and dealt with (as opposed to changed/eliminated). A straight man acting like a hard-ass around other men will only keep him "cool" for so long, but if there are no women are giving attention, that "cool" will dissipate very quickly.

I have even seen middle school girls be treated like crap by their "boyfriends", and instead of saying, "I don't deserve to be treated like this, please stop acting like a macho tool or I'm gone", they just put up with it because they seek the attention from the boy (and being in a relationship) above all things. We're taught as women from a very young age that "boys will be boys", and that it's a negative thing for men to be a "sissy", so we ourselves perpetuate and reward this kind of macho behavior. After all, the most masculine of all traits is the amount of "poon they can score", and if the "poon" doesn't put up with that crap, perhaps it would send the message and change the norm.

[...] but many of the men become chattel. Before anyone assumes that the liberation of women leads to the repression of men, I would like to point to the current dialogues about masculinity in modern US and Japanese society [...]

Hmmm... I'm really not shocked by any of this. I think perhaps I've been desensitized to the forced machismo impressed on my gender in my 30 years. I think that disturbs me more that I'm not really upset by that ad, or any other stereotypical macho advertisement.

Come to think of it, I'm blitzed with advertisements and other media influences (radio, tv, movies, magazines, newspaper, and billboards) that tell me what a REAL man is, and what REAL men want, and what REAL men are capable of, that it's no wonder why my fellow men (and admittedly sometimes myself) fall prey to the struggle to fit into the MANLY MAN stereotype.

I think that maybe, since the gender definition line has been blurred so much over the past several decades, that the old school macho-infused guys feel like they have to solidify their own security in their sexuality by going over the top. They're aggressively encouraging men to be more "masculine" in order to reaffirm that line and recreate that comfortable gap between the sexes. It may be that inherent insecurity that continues to fuel the macho media blitz.

Honestly, equality across the board is a relatively fresh practice. I can't remember any civilization that didn't segregate or discriminate against somebody for some reason or another. (If I'm incorrect, please prove me otherwise) Don't get me wrong, we all bleed red and should be treated as such. As hard as most of us try nowadays, we still fall prey to old habits and stigmas. I'm just saying that millennias worth of mental and social conditioning isn't going to be broken in a day. It's going to take a long time and a lot of patience to overcome this tradition of forced gender stereotypes. And honestly, in the scheme of things, we've come quite a long way from the REALLY bad social stigmas that our ancestors used to practice. We still have a long way to go, but we're much better off than we were before.

There is a genetic impression left in the instincts of most men that are more primal. Mostly, these impressions are mild and easily overcome by common sense and basic reasoning. But, when fueled by insecurities fabricated by the corporate machine, these primal instincts are inflamed. Men are going to be macho around each other, and strut around like peacocks in front of women regardless. That's just the way we're instinctively programed. We have to remember that we are indeed animals, and the only thing that separates us from the rest of the animal kingdom is our intellect and imagination. No amount of conditioning is going to stop that. And screaming at big businesses for taking advantage of our insecurities isn't going to work either. What we CAN change is the way we let these influences effect us. Just knowing what angle the marketing companies are working helps us take the wind out of their sails.

This reminded me of the snow cone add from Mad Men. In it, it showed different targets that kids didn't like being hit with a snow ball.