Since Lisa posted about the Old Spice guy today, I thought I’d post about a reaction to it. Stephanie V. let us know about Brut’s new feature on their website, Some Men Just Need to be Slapped. The…game (?) presents Man in a Towel, clearly meant as a parody of the Old Spice character: 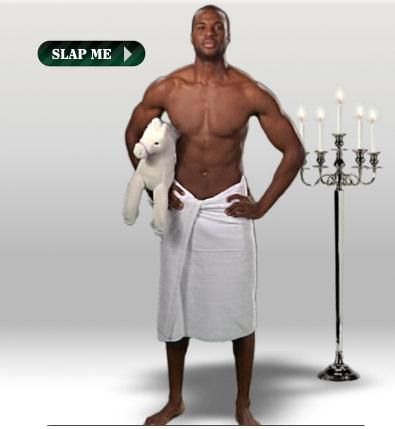 You are then invited to slap him with various items: 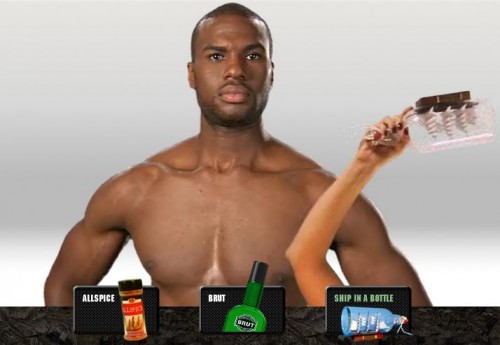 In each case the hand shown slapping him is a woman’s, though for some reason when you click the option to slap him with Brut, it’s just an empty hand, not the actual bottle. Presumably her palm has Brut on it.

You can also then choose who should be the next slapping option — a character called The Incident (a parody of The Situation from Jersey Shore) or a mime: 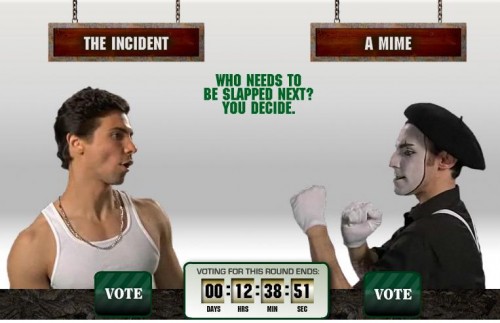 Brut is going with the theme common in men’s hygiene products, which is to reinforce a certain stereotypical type of masculinity. Their website refers to Brut as “essence of man”: 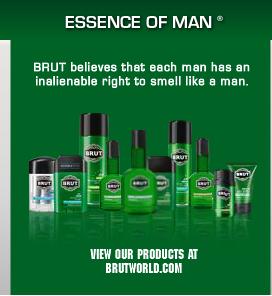 As Stephanie says, “I didn’t even know they still made Brut — but clearly they’re trying to hone in on the Old Spice crowd by challenging their manhood.” And how better to denigrate a guy as insufficiently masculine? Show him being slapped by a woman, of course.

Isn't this sort of half-satirical? In any case, that half would be concerning. Maybe it's one of those things in which it seems satirical to those who would otherwise be offended but serious to those who find agree with the message well enough.

Fine young Black man wearing towel after showering-Okay. I can dig that.

Fine young Black man holding stuffed pony (or any other stuffed animal) while wearing a towel after showering (or any other time except while playing with his young children)-Nope.

Fine young Black man wearing a towel or wearing anything else or nothing at all being slapped by a woman* holding various items- Oh hell no!

And the fact that the arm of the woman in this ad might belong to a White woman suggests to me that this Brut ad is playing with the two memes of Black man as stud and Black man as brute (Did you get the play on words-Ha! Ha!) snark.

So what is this fine young Black man supposed to do after he's slapped-retaliate with some rough sex? Talk about sick fantasies. (With sick here not having the hip-hop meaning of "very good").

Of course, the Brut corporation can claim plausible denial that it didn't mean to imply any of this. Yeah right. snark

Wait, why does he neigh like a horse and smile after being slapped with the Brut cologne hand? Is he aroused? I am unsettled. Also, the white horse is probably there in reference to the Old Spice ad prominently featuring the character riding a white horse, perhaps there for that reason more than to show that he is failing to be properly masculine. This is tricky grammar.

It's advertising like this that makes me want to stop using products I already consume.

Interesting to compare this with the "Hit the Bitch" game featured here a while ago.
http://thesocietypages.org/socimages/2009/11/18/hit-the-bitch-danish-anti-domestic-violence-campaign/

I haven't played either game because I don't enjoy the concept, so perhaps I'm missing context within the games. But I don't understand the rise in this type of game (I'm including the "slap a ho" concept in here as well) as entertainment or supposed "accepted" memes.

By the way -- the reason he is being slapped with a bare hand instead of the Brut bottle.... It because that's how you put on aftershave! You sort of slap it on. You sprinkle the Brut onto you hand and slap!

I'm pretty sure this is the 'foundation' for this stupid website feature.

Hmmm yes the essence of man. I do not avoid women, but I do deny them my essence.

What in the hell? I feel a bit sorry for the actors. Brut, on the other hand, seem to have missed the day in kindergarten when you're taught that putting something else down doesn't make you any better. Anyway, who is this even aimed at? It's a men's brand and yet the slapping (from a first-person point of view) is done by a woman? They think having potential male customers role-play at being a violent female will make them want to buy whatever they're advertising?

Having looked again at the website it does seem they tried to up-play the femininity of the mime.

Both a horse stuffie and the candlesticks are clearly feminine. Candlelight being feminine as-is, and also pretty/ornate/antique things. I also see that it passes without comment that the slapper's skin is much lighter than his.

I also notice the non-brut items are allspice and a ship in a bottle, which are more old spice references (name and logo).

Overall, a one-star commercial, a derivative of someone else's creativity with no charm of its own, with bonus gender and race problems.

This to me is a stupid and offensive ad. Can you imagine a woman's product like Dove being sold to women with the line "Some women just need to be slapped"? Of course not, they would rightly be up in arms. So why does a man's product denigrate men and say some need to be slapped by a woman? Guys, let's stop allowing these two bit marketing tactics to denigrate men and let's not buy this product.