Acceleration for Support of Same-Sex Marriage 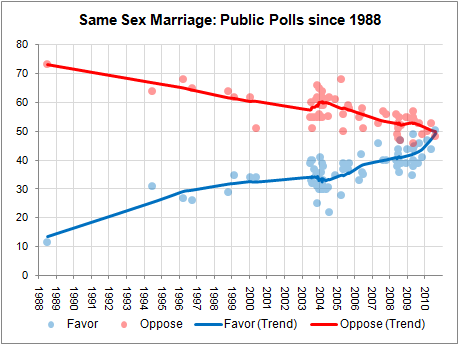 CNN just conducted the first poll showing that a majority of Americans believe same-sex marriage should be legal. That’s just one poll, and we’ll need to see more data, obviously. But we can clearly see that an increasing number of polls show the % favoring same-sex marriage at or above 45%. A regression of all the polls shows a 4 percentage point increase in the last 16 months alone. If this trend continues, we should be nearing the point where differences in support for and opposition to same-sex marriage would fall within the margin of error.

Silver suggests that activism among gay and lesbian rights groups, including a specific push for recognition of same-sex marriages, has led to more acceptance:

Something to bear in mind is that it’s only been fairly recently that gay rights groups — and other liberals and libertarians — shifted toward a strategy of explicitly calling for full equity in marriage rights, rather than finding civil unions to be an acceptable compromise…it seems that, in general, “having the debate” is helpful to the gay marriage cause…

Of course, presuming this trend continues and we soon have a majority (even if not an overwhelming one) of Americans supporting legalization of same-sex marriage, that does not necessarily translate into legalization. Acceptance of same-sex marriage is surely unevenly distributed across the U.S. If legalization is left to the states, we can assume some will be much more likely to accept same-sex marriages than others, continuing the patchwork system we have now where gays and lesbians may find themselves married in one state but unmarried if they go on vacation to a neighboring one. National legislation to legalize same-sex marriage would be strongly opposed by a number of legislators from districts where acceptance is below the national average; I’m guessing that even many Democrats, who are usually depicted as more friendly to gay and lesbian rights than Republicans, would not go so far as to vote to legalize gay marriage in the near future. During the campaign, Obama and Biden clearly stated that they supported civil unions but not marriage for same-sex couples.

On the other hand, the federal judicial system could take this out of the hands of Congress and the Senate, or individual states; same-sex marriage could be legalized whether or not a majority of Americans supported it. But short of that, while changes in public attitudes toward same-sex marriage certainly present an encouraging picture for supporters, I think legislative action to actually legalize it is likely to lag significantly behind overall public acceptance.

Jennifer, i guess you are in the poor situation of beeing subconsciously influenced by the western male-centered media-system! *I* for my share, am able to reflect these discriminal tendencies, and beeing aware of my un-manipulated mind I state: the poll looks like a pair of spreaded legs, owned by an overweight lady that has an angry eruption from shaving...

Glad I'm not the only one who saw the penis. Just sayin'.

I wonder what caused the little bump in 2004. And don't say circumcision. :-P

it's clearly a giant squid.

They posted a (less-optimistic) update on this today, where results from automated polls show a very different result:
http://www.fivethirtyeight.com/2010/08/automated-poll-produces-starkly.html

They've written before at 538 about how people respond differently to automated polls than they do to face-to-face polling (where they feel more pressure to give a socially acceptable answer).

Hmm, red and blue. Red, often associated with republicans, conservative views, etc., depicts here the opposing view. Blue, many times associated with liberal values, depicts the proponent view. I wonder why that is. How many graphs and charts have you seen that equate opinions with these colors that are also associated with political parties and their generalized platforms? Do these trends change with popular opinion? Maybe this is a question for our friends over at Graphic Sociology?

HRC: Inclusion and Privilege in the LGBTQ Community | thenerdfemme — March 30, 2013

[...] support? Well, America is not quite as divided as it used to be. Not only do some polls show that the majority of Americans believe that we have the right to marry someone of the same sex, but support for gay marriage is rising in every demographic. In addition, politicians frequently [...]

[…] support? Well, America is not quite as divided as it used to be. Not only do some polls show that the majority of Americans believe that we have the right to marry someone of the same sex, but support for gay marriage is rising in every demographic. In addition, politicians frequently […]