Going on 500 of you “liked” our recent post summarizing the statistical case against Walmart for gender discrimination.  A new Catalyst report, sent along by Washburn University Professor Sangyoub Park, reveals that Walmart isn’t alone in failing to promote women.  The study of Fortune 500 companies found that the percent of board seats and corporate officer positions held by women have been increasing, but not particularly quickly (source): 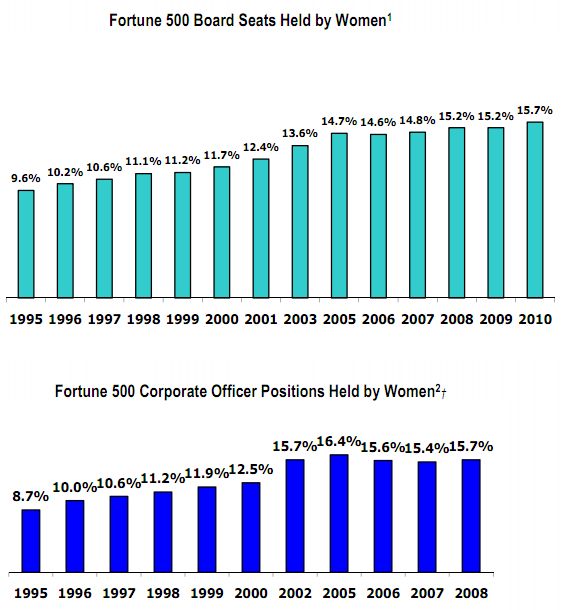 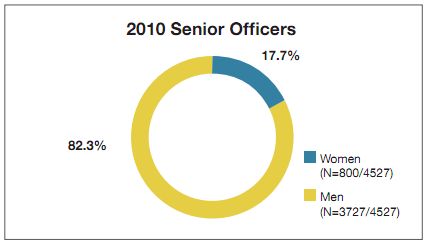 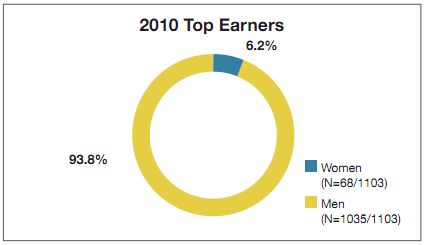 136 of the 500 companies had exactly zero female executives.

The data, however, actually varies quite tremendously by type of company (in a way that dovetails with general job segregation by sex): 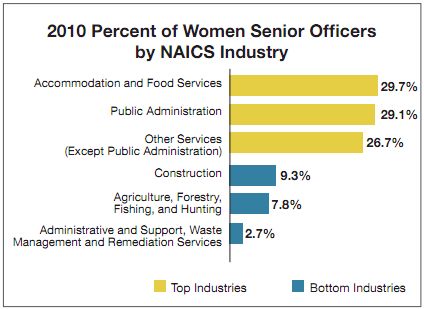 Data from the Deloitte Global Center for Corporate Governance, covered by NPR, reveal how the United States compares to other similar countries.  It shows that Europe is also struggling to achieve parity in the boardroom: 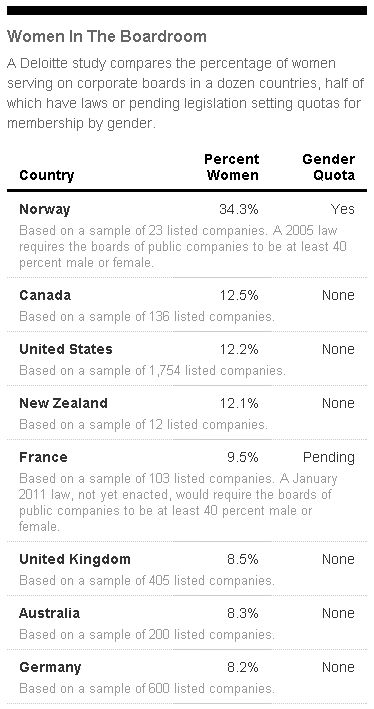 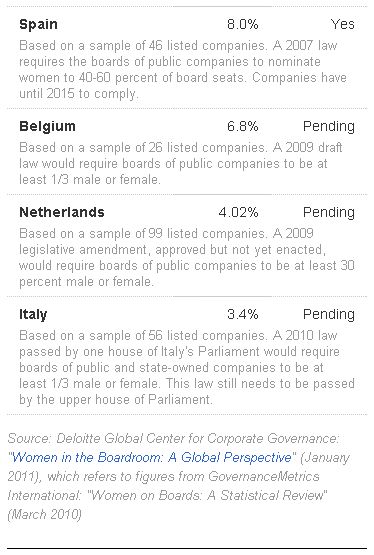 Thank you for compiling these stats and posting them here! It's so helpful to have a handy place to refer people when they don't believe me that gender equality isn't a foregone conclusion, particularly in the workplaces.

I wonder to what extent that these data can be partially explained by the average length of time that a person must be working in a career in order to be considered for the board of a Fortune 500 company.

My suspicion is that the average or median age of Fortune 500 board seat members is somewhere north of 50 years old. Therefore, if these data represent the effects of how long it takes for changes in gender equity to propagate through the employment system, you might expect that the proportion of, say, MBA graduates in the 1965 to 1980 time frame to have been similar to the proportions found in the first two charts. If that were not the case, then the charts would take on a new meaning.

I really oppose hiring quotas, even though I am part of a visible minority. Best person for the job, I say.

I agree that something needs to be done to motivate more diverse workforces and I see the intention behind quotas, but I've never been convinced that the end justifies the means.

I'd love to hear some intelligent arguments, however, from someone out there who approves of them or at least grudgingly accepts them as a necessary evil.

I am actually reading about prejudice for my class and one of the topic discussed was gender discrimination. I think of the most important effects of gender discrimination are how the victims view themselves. Perhaps many women feel they don't have the stamina or ability to be an executive and therefore shy away from pursuing that position. Women overall can feel so victimized that are even less likely to ask for a raise.

These are all blue-collar jobs. So, I'm not sure if the traditional narrative really applies here. This isn't so much a case of the "old boys network" of rich white guys who are excluding the ladies. It seems more like these are blue-collar industries where the jobs are generally viewed as undesirable by women and the companies mostly promote internally. At least that's my "read" on it. I'm basing it on some personal experience with mid-sized construction companies that were male-dominated. In fact, I'd be willing to wager that most Wall Street financial firms and "BigLaw" law firms (i.e. the traditional country club set) probably have more gender parity in their workplaces than a lot of blue-collar manual labor-intensive industries.

It does pose a dilemma, in my opinion. Should a company bring in female management through lateral hires if it means, say, not promoting a male internally? The other issue I see is: what connection should there be between management and the rank-and-file? Should there be female managers in a company that can only attract male employees? I'm not sure. I think there might be problems with fairness in that regard, honestly. I personally favor there being some kind of representation of the workforce among management, demographically speaking.

That brings to mind another issue that is related to this: do we even want gender parity in all industries? For example, should we be advocating that more young women go into waste management (i.e. trash pickup)? Or construction? It seems to me that these jobs are male-dominated not because they seek to exclude females on a proactive basis but because society sees them as undesirable and women simply avoid them (in the grand scope of things, I'm well aware that there are women in construction and waste management and so on, but they form a small minority). If I'm right and it is the case that women generally avoid these industries for whatever reason, rather than it being the case that they're excluded through unequal hiring practices, then it seems unfair to me to use that fact as a basis upon which to critique sexism in the labor force or to critique those particular industries.

[...] getting paid less or 2) men getting promoted and women not getting promoted across all sectors (glass ceiling) or 3) both of those things at once. Here is a case of women working in the same company and doing [...]