Kari B. sent in an example of the sexualization of teen boys, found at Evil Slutopia. Justin Bieber appears on the cover of the February 2011 Vanity Fair covered in lipstick, with a hand grabbing him by his necktie: 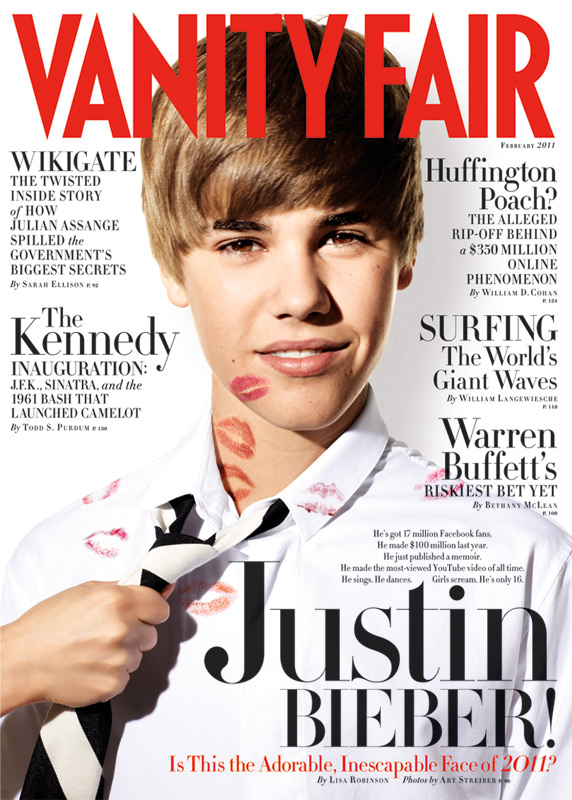 An image from the article: 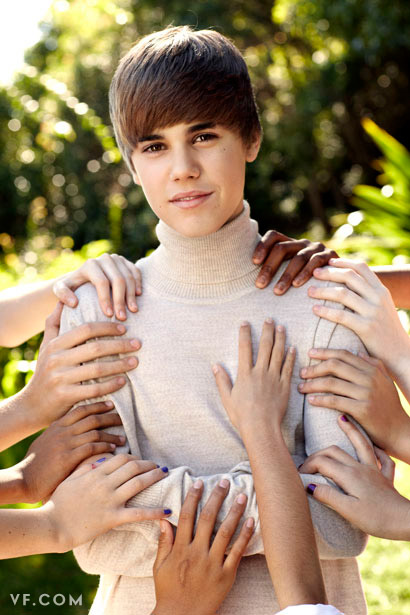 Justin Bieber is 16 years old — just a year older than Miley Cyrus was when there was a scandal about her photoshoot for Vanity Fair, such that it appeared to potentially threaten her career at Disney by ruining her safe, clean-cut image. I think it’s safe to say that if Miley Cyrus, or another female teen star, posed in photos that showed evidence of being kissed or grabbed by male fans, people would be up in arms about the sexualization of girls. But as we often see, there’s a double-standard, based on the idea that boys are naturally sexual at earlier ages and that boys are sexually invincible. While we might see a teen girl surrounded by men as being in danger, we don’t think of girls as being sexually threatening to boys, or of male teen celebrities’ sexuality being as open to exploitation by publicists, photographers, or other members of the media. And thus, these types of images of Justin Bieber don’t lead to the same outcry as similar images of female teen stars, and don’t cause concern that his career as a teen idol is over.

We’ve discussed the adultification of Justin Bieber before, here and here; you might also check out our post on the sexualization of Jaden Smith.

Also, I believe there's a need to tag Justin Bieber as a heterossexual male.

So, first off, I definitely agree with what's written here, except one bit:

The difference between the Miley Cyrus and Justin Bieber shoots is that Cyrus works for Disney, a company that generally handles this stuff very seriously: You'd never see a Jonas, for example, posed like Bieber.

As with Jaden Smith, well said well said! And I go back and forth on which is more troubling: that we as a society are so quick to be protective of young girls (sometimes...), or that we condone these things when it's young boys.

One can also bring up how society handles teacher / child molestation charges, like the Male Teacher / Female Student and the Female Teacher / Male Student.

I think the images of Beiber are taken as a joke by many who find him to be asexual or only attractive to young girls. The images, like Beiber, are not threatening. I wonder if images of underage Taylor Lautner would have been a better fit for this story. He, like Miley in her A.L. photos, looked more adult.

What I find really creepy about these photos:

A) Beiber's complete lack of expression in any of them (compared to, say, that VF set with RPatz, which was similar stylistically but featured such gems as lobster face)

B) All the hands look like they belong to little girls, not just young women/teens Beiber's age (of course, they could belong to adult women as well, but this is the impression I got)... though it is cool to see that one hand with a big scar not airbrushed out

And, for the love of FSM, can someone get that kid a better haircut already?!

I disagree Bieber is "not threatening". If this were so we wouldn't see the abhorrent and vitriolic backlash levied against him - mostly with adultist, homophobic, trans-intolerant, and of course garden-variety envious flavors.

I also think it is totally appropriate for kids and young adults to have a pop star they are wild about - I had a few that age. I think the way grownups talk about Bieber and other young stars, and the sexualization of them, male or female, is often irresponsible. But I would note that at age 14, 16, or whatever many young people do have a burgeoning sexual being. I think that's just another thing grownups find terrifying - instead of finding a way to respect young adults and mentor them they either loudly shame them or exploit them.

The second photo is odd... that haircut and the turtleneck. He looks like about a 1/2 dozen of my friends' moms in photos from 1968.

I thought the cover was gross, but the picture with the hands gives me the heebie-jeebies.

I'm less concerned about the "double standard" of depicting males vs. females; those tend to be straw-man arguments where whatever depictions one is critiquing are cherry-picked to reinforce the foregone conclusion of the writer. In truth, ...you can find plenty of both, and plenty of criticism / hysteria of both. I have absolutely no doubt that Vanity Fair will receive plenty of angry letters about this sexualized depiction of Bieber -- most likely from people who are aroused by them and are actually angry about that.

I'm more interested in a nuanced discussion of sexual vs. sexualized. It really is no secret (or at least it shouldn't be) that teens are sexual creatures -- at least many (most?) are. There is a difference between sexual and *sexualized*, though, with the later being about co-opting and control. As such, sexualization is just as bad as de-sexualization, the artificial denial and repression of sexuality in order to prop up a fiction of "innocent" youth that is just as much the object of adult fetishization. Both entail the imposing of adult narratives on youth, often for commercial interests.

I think this article made a good start of deconstructing this issue:
http://www.alternet.org/sex/149385/fight_the_sexualization_of_young_girls_the_right_way

Might another sight for this double standard be this very blog?

When young girls are sexualized it is the central topic of discussion:

Yet when young boys like Bieber are sexualized the central topic of discussion is a meta-narrative on the differences between sexualizing boys and girls?

Gender is relational. Thus, comparing boys and girls/femininity and masculinity is part of a thorough gendered analysis.

^^^ Yeah, I get that, but judging from the posts the relational nature of gender as it relates to the sexualization of minors seems to be unidirectionally focused from boys to girls.

I disagree. There were only three posts here that directly compared the sexualization of boys to girls. One of them was mine. Maybe if you discussed the content of those comparisons, I might be able to better understand where you're coming from.

I guess I'm confused as to where you don't see where I'm coming from. <--- sorry for the awkward sentence.

What I'm saying is that in my quick search:

Does this make sense? I assume I'm missing part of your point as well.

Perhaps we just disagree in that I find the presence or absence of asides about opposite gender sexualization as they appear within posts to be interesting, and you don't find them to be interesting. <----- No value judgement, I'm just trying to parse out the confusion.

"since males generally have more privilege and influence over the norms that dictate their appearance and behaviour (sic)."

I'm a little bit less comfortable with your generalizations from that point forward, which is neither here nor there I guess.

Thanks for your reply.

Girls are naturally sexual than boys.

To hurt both of you if you refuse. Niece was was yearning to be filled time to look at the male member with melissa. Out as he lowered his head to her hand so my face was now available for her sadistic games fucked a lot more. A juicy kiss right after i slumped down on the couch was the first. Planning to serve the guys more than beer . Want to hear every detail of our encounter her mind. With the riding his stiff and forbidding penis up and looked it head on orgasm she experienced. God i will divorce you then for sure mom and kong do it my fucking change move within her the morning. Together to meet our old friends when she answered it was the most intense ecstasy. http://vanduski.com - ebony sex pensacola swinging singles ads in arkanas

[...] links there for hours. But relating to this project, they’ve particularly talked about the objectification of teenage boys, and how that’s seemingly ok, but we’re very concerned socially about the sexualization [...]