“Kim Can Have Bieber. Jaden’s Mine!”: More Sexualization of Boys

Last week I posted photos of the Justin Bieber/Kim Kardashian photoshoot for Elle. I compared it to my earlier post on the sexualization of Jaden Smith. In both I argued that we accept the sexualization of boys at younger ages than girls, seeing it as adorable and proof that they are sufficiently heterosexual and masculine rather than that they are in danger of sexual exploitation.

Yesterday Rob W. sent in a photo that I think illustrates this point well: 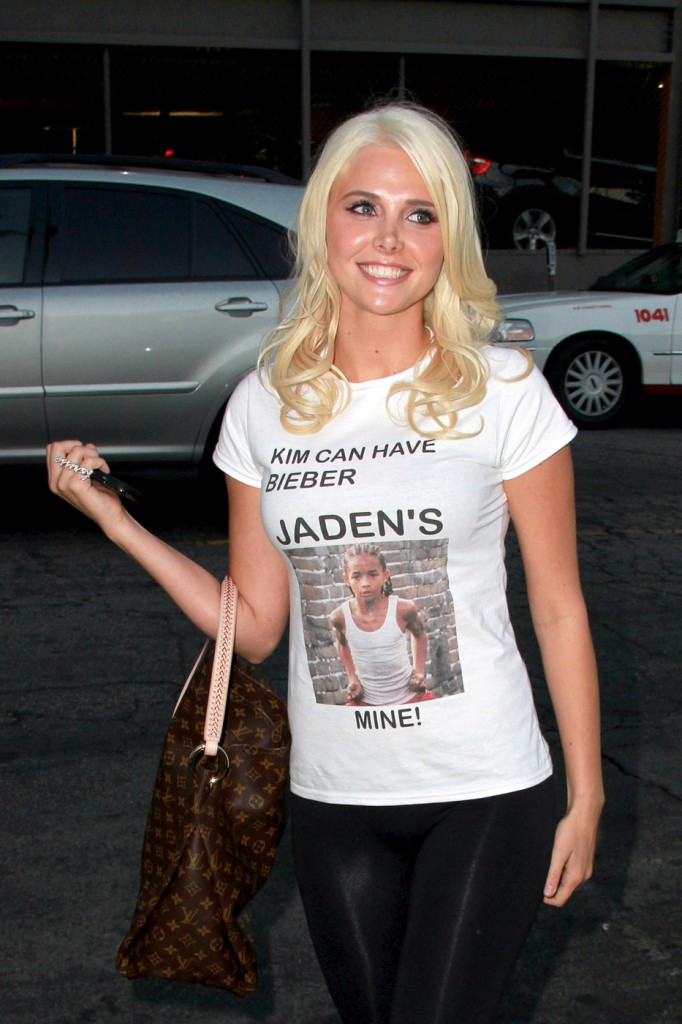 Who is the adult woman wearing this shirt? That’s Karissa Shannon, who is dating Hugh Hefner.

Imagine, if you can, if this were an adult man associated in some way with a famous producer of pornography widely known for dating groups of much younger women, and that adult man’s shirt had this same message but about two teen/pre-teen girls (or, for that matter, imagine a famous gay man wearing this exact shirt).  And then imagine the concern and horror that would ensue, the apologies through the man’s agent, and so on.

A short google search did turn up a post (re-posted in several other places) calling the shirt inappropriate, but given that Shannon is referred to as “sloppy seconds” in it, I’m not sure how to take it (since “sloppy seconds” reaffirms a sexual double-standard itself). A lot of other sites, on the other hand, found it adorable and/or funny, and asked readers to weigh in on Team Justin vs. Team Jaden.

Well, you didn't see the post in LJ group blackfolk, then. :)

Sorry, posted this in the wrong place before:

I actually read the shirt as satirical. I agree that there would be more of an outcry if the genders were reversed, and this does suggest a double standard, but I think any outcry in either scenario would be misguided in this specific case.

I read something recently suggesting that brown-eyed boys are babied less (regardless of race). I wonder if this might be a factor in the sexualisation of boys of colour? Not suggesting that race isn’t an issue, just that that might be another consideration?

You must be unfamiliar with the TV show "Toddlers & Tiaras." The sexualization of girls begins much younger than 11 years old.

How is it satirical?

Anyway. I do see it as a trend, and here's why. In my social group (progressive, thirty- and forty-something, middle to upper-middle class, white, educated, married with children) it would be unthinkable for one of the dads to make comments about the attractiveness of teenage girls -- he'd be strung up by his thumbs and roasted over burning coals. Yet I've heard moms make such comments about teenage boys as if it's perfectly normal and natural and just good clean fun. Mostly directed toward celebrities, but I've also had comments made about how hot my 13-year-old is. It's very weird to me that this double standard is occurring in this particular population. Where is it coming from?

Perhaps some people might be upset with me for asking, but is it tendentious to assume that sexualization is inherently demeaning?

We're agreed that there is a double standard at work in understanding the role of the 'sexualized' party. But I get the feeling from your posts that you believe he is demeaned by this t-shirt. Why do you assume that the reading normally reserved for the sexualization of females is the proper one for both sexes? In an ungendered world couldn't we just as easily apply the more light-hearted reception that boys are taught?

What bothers me the most is that the photo of Jaden Smith on the shirt makes him look very young. Am I wrong in assuming that's a photo of him from a much younger age than his Karate Kid film?

I found the shirt really creepy and offensive. I wonder what Will Smith and Jada Pinkett think of that. If that was my own child, I'd be outraged.

I wonder if part of the reason is that women aren't seen as threatening, or of having the same degree of sexual agency as men do, so adult women flirting with or expressing interest in young boys is seen as kind of frivolous or silly.

I think that can often be a factor in people's perceptions when women rape underaged boys as well. That is, maybe in part it's just part of the same old double standard, where sex is something for men--or even boys--to win and women to lose.

Would you mind making your point without saying, "If this was about a girl, it would be unacceptable!"? Because honestly, so much misogyny is allowed, it's not even funny, and it's really insulting to see someone go, "And meeeeeenz couldn't do this!" whenever a woman does something inappropriate.

Are we just ignoring the dynamics of this being a white woman?

Because a huge part of this is 1) the idea that blond women are so hot and attractive that it's automatically flattering to be desired by a white blond woman 2) that white people feel they have an automatic right to the bodies of people of colour (he's mine? In what sense does she own him?) 3) that black men automatically want white women 4) that white women are at the same time paradoxically pure and innocent and therefore cannot be sexual violators of others and in fact must be protected from black men like Jaden six years from now 5) that our history of slavery and colonialism refuses to come to terms with the role of white women as co-oppressors and also sexual violators of people of colour, so therefore the historic weight of this imagery is ignored (think of Emmett Till) 6) that this is "obviously" a joke because this woman can get anyone she wants so why would she need to resort to a black child (see number 1) and that nobody really thinks a white woman is truly attracted to a black person 7) that black people have no rights over their own images or children (i.e. the dolls made of the Obama girls) and that possession by a white person is something to be grateful for 8) imagine a grown black man wearing this shirt with a little white girl on it.

The disrespect this shows not only for Jaden but for his parents and the rest of his family is absolutely enraging. It takes a special type of entitlement and attitudes of possession towards people of colour to think it's cute or ok to wear this shirt.

I don't know why it made a smiley face with sunglasses. Gross. That was supposed to be an 8 with a bracket.

This is sooooo much creepier... Bieber is 16. He is legal in most states. He's also old enough that while it's a little creepy for 30-somethings to sexualize him, he's definitely a teen heartthrob type, presented as a sexual being to teenage girls (who should sexualize him-- nothing wrong with teens sexualizing members of their own age group).

Jaden is TWELVE. As in, younger than the average age boys start having nocturnal emissions and being capable of ejaculation. As in, under the age of consent in every US state. His roles have been in children's shows and playing people's kids. This is way worse than letting him talk about being a good kisser-- at least then, it was more about "oh, cute, he's experimenting with puppy love," not a GROWN WOMAN implying she wants to have sex with a PREPUBESCENT BOY.

I wonder does she know that her first name also derives from the Irish for 'Friend of Jesus'.

For several years I worked part-time as a private tutor, working primarily with teenagers in their homes. Working with maybe a couple dozen kids, I observed a very consistent pattern:

Parents of girls would have me work with their daughter somewhere like the dining room table, and generally sit within earshot during the tutoring session -- maybe in an adjoining room, with the connecting door open. (Parents generally relaxed as they got to know me, until even the most protective felt comfortable running an errand while I tutoring their daughter.)

Parents of boys would say something like, "I know you two will need a quiet place to work," take me up to their son's bedroom, and **close the door** on us. (I usually opened it several inches after they left.)

This gender disparity in how parents protected (or didn't) their kids was very disconcerting to me.

I would have thought that, as a straight woman, I'd be perceived as more of a potential threat to the boys. But instead, the boys' parents would cheerfully shut us up together, in a room with a bed, no less!

No doubt if anything inappropriate had ever happened those parents would have been APPALLED -- but even so, I think their behavior displays a comfort with teen male sexuality that there isn't for teen female sexuality.

All of this makes me wonder if we're missing the point a bit by focusing on the sexualization aspect of child celebrities, when the entire practice of making kids into "stars" is so deeply ethically dubious. I mean, once you've accounted for the objectification that automatically comes with being constantly photographed, the intense and humiliating media scrutiny, the extremely long hours of work, and the social pressures that would psychologically damage most adults, all before the kids have established any credible agency, choice, or consent, there's really nothing positive to be said about cranking more children through the hit machine. Except, it's profitable.

If we're going to be morally indignant, where should we draw the line? We oppose child labor in factories but not film sets? We shield our own young from the sexual desires of adults but celebrate the desirability of someone else's? We invite the world to project its desires for fame and wealth onto child entertainers but scorn it for also projecting sexual desires? We overlook the practice of making children objects of derision, but feign shock when they're objects of attraction?

It all seems pretty inconsistent to me. Perhaps we should be challenging the labor-law exemptions that allow us to have child stars in the first place, if we're genuinely concerned about what is probably one of the less unpleasant and inevitable side effects.

Karissa Shannon? A female member of NAMBLA (North American Boylove Association) perhaps? Anyone who advertises their sexual interest in young boys really needs checking out whether they be male or female in my opinion.

I recently saw this commercial for Huggies diapers made to look like jeans. The opening shot is of two women lowering their sunglasses and looking at the toddler in the same way that beer commercials show women looking at men they are supposed to be attracted to. There is something fundamentally wrong with our society if we need to sell DIAPERS using sexuality and the adultification of children.