All social movements try to frame issues in ways that benefit their cause. Controlling the discourse is an important step towards getting the outcome they want.  Previously, we’ve posted about the way that activists against the genetic modification of food have nicknamed these foods, “frankenfoods.” Recently, Steven Foster, a student at Rensselaer Polytechnic Institute, sent us a pair of images questioning this rhetoric by comparing the imagery with the animals in question. 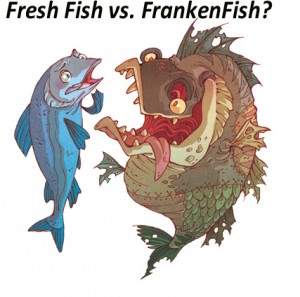 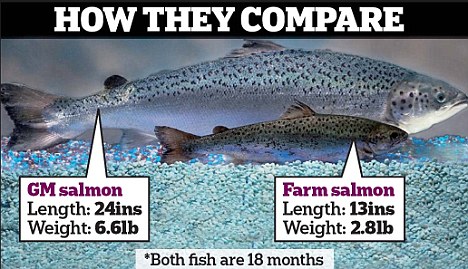 While we don’t know whether anti-“frankenfood” activists are right about their concerns and it’s certainly true that these animals are genetically modified; it’s also clear that the visuals distort the facts (that is, the modified animals are not nearly as distorted as the cartoon implies).  Thinking through how the tactics by which social movement actors try to influence discourse is a fun and useful application of the sociological imagination.

Why do some people prefer eating genetically unmodified animals (if there even is such a thing, cross-breeding and evolution modify genes as well)? The modified slamon in the picture looks much tastier :)

I enjoyed that even the "good" salmon is farmed.

What's the most interesting to me is the juxtaposition between "fresh" and "genetically modified." While there are many reasons to feel wary about consuming genetically modified foods, it's surely not because those foods aren't fresh - they very well could be. But the image presents those things as mutually exclusive.

Of course, if they showed both fish at harvest time, you wouldn't be able to see any difference. The main difference between the GM fish and the other is that the GM fish grows faster.

The suppression/modification of natural selection processes in *farmed* species of migratory fish like salmon is just a problematic. Lot's of studies being done on this. Including the harm of introducing farmed fish into the wild ecosystem.

You know, Mary Shelly's Frankenstein wasn't about the creation of a monster that immediately became evil. He only wanted a family and love, but people feared and hated him because he looked substantially different from what they were used to. It was these abuses that made him hate humanity and become evil. The story is about intolerance just as much as it's about not going there with science. I therefore find it ironic that the name Frankenstein is used now as a scare tactic to evoke images of a monstrous creature and rally us to grab the pitchforks and torches.

Seems like portraying "ugly" fish as worthless and bad might make it more difficult to maintain support for "ugly" but threatened/endangered fish species and fisheries worldwide. This includes unique and endangered animals like the Australian lungfish, unsustainable fisheries like Orange Roughy, and so on.

While we're at it, it might be worth discussing the difference between Patagonian Toothfish and Chilean Seabass.

This reminds me of something my natural science teacher taught me once (and looking back, it's probably the only thing that really stuck). When talking about the most common myths surrounding evolution, I was taught that as far as the process goes, breeding to get animals of certain qualites is no different at all from the "natural" process. This brings the question: what exactly is the difference between the process of getting these salmons and the ones that brought us modern pigs, cows, etc? I can understand the concerns of breeding to the point where is mistreatment of animals, such as in the case of Belgian blue, but is there anything more to be concerend about?

"While we don’t know whether anti-”frankenfood” activists are right about their concerns"
You might not know, but science does: and the answer is that they are wrong. Biology is rather robust, and genetics especially. Modifying genes directly is little different than selective breeding. Food has been genetically engineered for thousands of years.
I'd usually expect more critical analysis of claims here, especially since we're dealing with straight propaganda.

There's also the historical/social identification of food eaten with the people who eat the food. The affluent have greater access to organic, non-gmo food. The poor and working class are left with "junk" food and food which is, as you show here, seen by certain affluent populations as monstrous. The poor are themselves also often called "trash" (and trash=what is unfit to eat). Those from that side effect of poverty in industrialized society -- obesity -- are regularly portrayed as monsters. I think of the trope of the fat villan or fool we see in the movies (even children's films): lazy, unnatural, grotesque.

The "pure, clean, unadulterated, natural, organic, unmodified" (and thus uncorrupted) food is for those who are also "natural" and "organic" and also can afford to be. I think here of the idea of "real" food, as if that which sustains the bodies of the poor is not "real" and by association, the humans who eat it are the "monster-eaters," abject, and maybe not fully human.

The rhetoric of non-gmo, organic food seems almost fully unaware of the reality of food justice, and when the poor are considered, it is often in terms of bio-political control (Michael Pollen's plan for the hungry is to control their food choices, rather than increase the availability of food or funds for it). For the hungry who must eat the "monster" fish because they cannot afford the "natural" one, this rhetoric is deeply disheartening.

Just want to offer some love for Steven Foster as an RPI alum. Way to fight the good fight from snowy Troy NY!

Am I the only one who finds the cartoon Frankenfish adorable, in a way? I kind of want to adopt it as a pet.

As an Alaskan, I would like to note that both of those fish are
a) barely edible (farmed fish taste like sea tofu)
b likely to spread disease, thus dangerous to real fish and to the rest of the ecosystem.

That's not much, there's a LOT of hate for GM food out there. My personal favourite