Charitable Giving by Income and Sex

Emma M.H. sent us a link (via Jewish Philanthropy) to a study by the Center of Philanthropy, at Indiana University, about differences in financial donating by men and women. The report looks at data from a 2007 nationally representative survey of households, in which respondents were asked about their charitable giving in 2006. To isolate differences in giving, the report includes data only on single heads of household (whether never-married, divorced, or widowed), since in married households it’s difficult to distinguish who made the decision to donate (they point out that the literature is also very clear that married households are much more likely to donate than non-married households). You can get a copy of the actual questionnaire here.

As we see, in each income category non-married women were more likely to donate to charities of some sort: 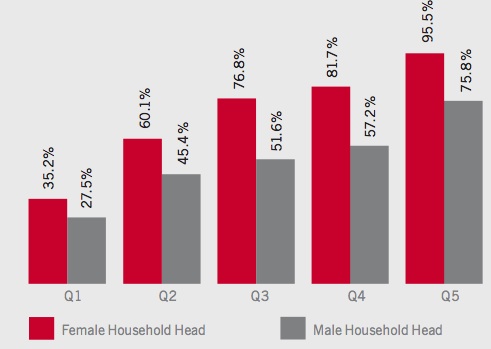 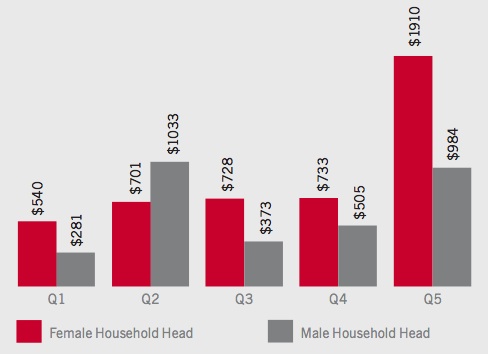 It’s interesting to me that the total amount of the giving doesn’t vary more by income for non-married women (the amount of reported giving is basically the same for the 2nd, 3rd, and 4th quintiles), yet varies so much for non-married men. Thoughts on what’s going on there?

Likelihood of giving also varies quite a bit depending on type of single status — those who are widowed are quite a bit more likely to donate than the never-married, which is probably partially a factor of age and related factors like generally higher incomes/wealth: 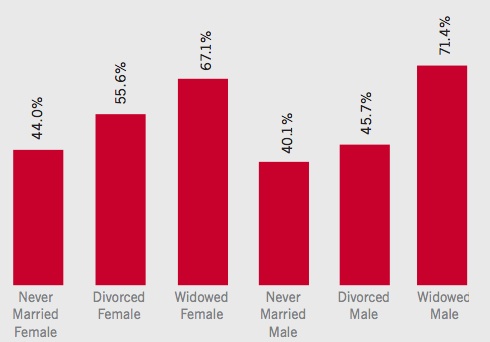 As we’ve posted on in the past, women are also more likely to be involved in volunteer work.

I’d love to see a breakdown of where men and women donate, but the report didn’t provide that level of detail.

From my experience in the non-profit sector, my guess would be that the extent to which American culture emphasizes self-interest plays some part in the differences. The majority of people are only likely to give charitable gifts if they can be convinced that it will directly benefit them in some way, usually in the form of a tax deduction or, in certain communities, salvation of one's immortal soul. However, due to the way American society is structured, services and activities that are of direct benefit to women particularly are more and more relegated to relying on charity--see for, breast cancer research (at least at first), battered women's shelters, family planning clinics, etc. By contrast, men--particularly wealthy men--are more likely to actually feel threatened by many charitable activities that would aim to confer the benefits they receive on others, and thus refuse to donate.

Again, this is a guess based on personal experience, not hard data.

"Thoughts on what’s going on there?"

Crappy data or crappy analysis. This is almost certainly the case given the glaring failure to have a monotonic trend in the "male household head". How is this not setting off warning signals?

Not only does the report fail to give error bars, it doesn't even manage to say what it's measuring. Just "women GIVE MORE than men". If it's an average, it should show "standard error of the mean" (which probably sucks). Personally I wouldn't report an average as it would be easily thrown by a single very high donation -- I think median would be appropriate.

It does a disservice to attempts at quantitative, scientific approaches to sociology to uncritically post things like this.

Who the hell cares about charitable giving? I understand this graph. I'm in my 20s, never been married, male and I wouldn't give a dime to anyone. I have zero opportunities in this economy and probably won't ever have any as long as the people in Washington keep privileging the urban yuppies and shitting on everyone else. I would love nothing more than to see the nonprofit sector go bankrupt and have every do-nothing put out on his ass.

I have a lot of interest in developing world nonprofits and so I'm gonna leave another comment making an a different point. I don't know if anyone's reading, I kinda hope it gets back to someone useful.

It's possible -- and in my opinion likely -- that the comparison of men and women for giving to secular organizations would not show such a difference.

The divorced man has a higher probability to pay child support and alimoney etc. as the divorced woman

I think it's actually very likely that in single-head-of-household situations where the adult is still of working age that women really do give more to charity than comparable men. The only avenues out of the house for women in traditional patriarchy was typically volunteer, church, or charity work, and it's easy to imagine both that vestiges of that tradition would condition men's and women's attitudes towards it differently.

That said I too would really like to see more breakouts in the statistics. Another factor that should be controlled for is the patriarchal tendency for men to marry younger women, which at the end of life tends to leave far more surviving widows than widowers. Since a huge amount of money is left to charity in the form of bequests, especially in higher-income households, you can see two structural complications that would make straight-up comparisons difficult.

Again I think such filtering would affect the analysis in two ways. First, by filtering out end-of-life giving we'd get a better picture of how regular ongoing donations split out by sex (I suspect the numbers might favor women even more.) Second, by accounting for age and survivor status we might get a bit more smoothing between sexes in the higher income brackets.

Final note: a lot of giving-related research shows that lower income households tend to give a higher percentage of their incomes to charity. Given that many low-income households are headed by women I'd expect to see that reflected in the numbers as well... especially if bequest-based giving was filtered out.

You know, in primate societies, a male's social rank is determined by the social rank of his mother.

I guess it wouldn't occur to anyone posting here that women are inherently more generous with their time and money, and men (as much as I love'em) often suffer from What's In It For Me syndrome? Honestly, can't anyone just call a spade a spade? I've volunteered at numerous charities and hardly seen a man in sight. I see kids volunteering for human rights committees at the school I work at, and they're rarely ever boys. All the charitable giving at my workplace comes from the women -- 100% -- despite the staff being divided 50/50 by gender.

[…] donate more than men. They are more likely to give, and they give more money. So why is the smart […]