**EXCLUSIVE** NEW TOY BOY TREND! Kim Kardashian may have attracted the attentions of Justin Bieber, but now Karissa Shannon is setting her sights on Jaden Smith! 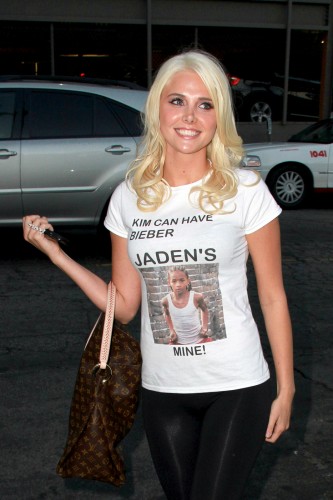 42557, WEST HOLLYWOOD, CALIFORNIA – Tuesday July 13 2010. **EXCLUSIVE** NEW TOY BOY TREND! Kim Kardashian may have attracted the attentions of Justin Bieber, but now Karissa Shannon is setting her sights on Jaden Smith!. The former girlfriend of Playboy magnate Hugh Hefner was spotted wearing a t-shirt with “Kim can have Bieber Jaden’s Mine!” whilst out and about in town with her boyfriend Sam Jones II. Jaden Smith is the son of actors Will Smith and Jada Pinkett Smith and stars in the remake of the classic 1980’s film “The Karate Kid”. Kim Kardshian has raised the heckles of many a Justin Bieber fan by becoming friends with the 16-year-old Canadian crooner. Photograph: Â© Greg Tidwell, PacificCoastNews.comÂ **FEE MUST BE AGREED PRIOR TO USAGE** **E-TABLET/IPAD & MOBILE PHONE APP PUBLISHING REQUIRES ADDITIONAL FEES** UK OFFICE:+44 131 557 7760/7761 US OFFICE:1 310 261 9676

I actually read the shirt as satirical. I agree that there would be more of an outcry if the genders were reversed, and this does suggest a double standard, but I think any outcry in either scenario would be misguided in this specific case.

I read something recently suggesting that brown-eyed boys are babied less (regardless of race). I wonder if this might be a factor in the sexualisation of boys of colour? Not suggesting that race isn't an issue, just that that might be another consideration?

that chick is too too old to be wearin that shirt and to old to have jaden shes like 19 years ol dand jadens is 12 what is that chicks problem!

i agree with jada stament that girl has an sirus problem

my name is asia and jaden smith is MINE

mariah is the bitch heere everyone

Its awesome feeling at the using this article because here we fix windows 10 mobile connections have no need to take any knowledge about the fire fox.