“Shall the Pueblos Be Civilized?”

Larry of The Daily Mirror sent in an article that ran in the Los Angeles Times on January 26, 1920. Here are some screencaps of the most interesting sections: 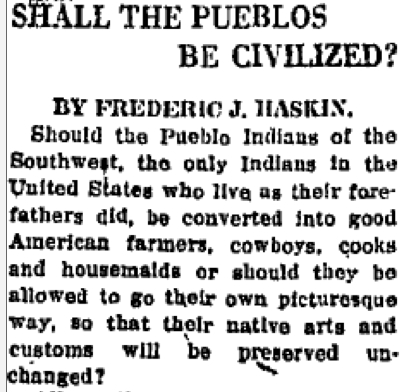 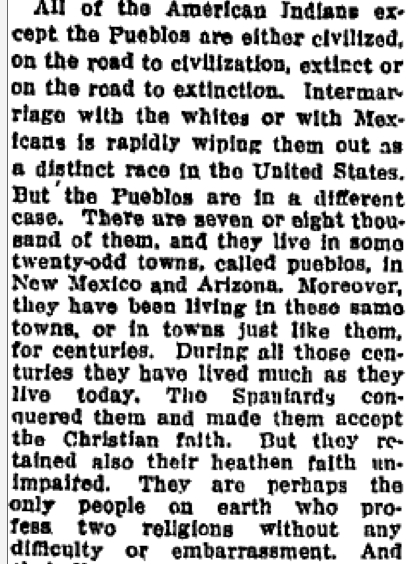 Not surprisingly, civilization means only one thing: assimilation into Anglo culture. The other option? Extinction. How do we know a tribe isn’t civilized? They still live like their “forefathers” did. It’s a theme we see a lot in terms of Native Americans: in order to be authentic (which in this case means “uncivilized”), they must not change any cultural practices. There is an expectation that “real” Indians are culturally frozen in time, as though their cultural practices and lifestyles had not changed throughout history just like every other group’s has.

And also, I’m pretty sure lots of groups have combined elements of two or more religions “without any difficulty or embarrassment,” but whatever. I’m sure they were, indeed, of immense interest to artists, scientists, and writers (also, physiognomists). And since they are of interest to them, that should definitely be taken into account when we decide what to do with them. Taos still loves Indian art.

Still, Native American cultural customs are acceptable only to the degree they are compatible with assimilation. And learning to read and write, use a stove or a sewing machine, mean giving up “the Indian life.” Again, modernity cannot be combined with existing cultural practices.

It’s a great example of how Whites felt entirely comfortable discussing what the future of American Indians should be, either romanticizing them as noble savages or insisting on their cultural backwardness, without any sense that Indians themselves might have any ideas on the issue worth paying attention to.

The artist point is particularly weird. Where do artists in big cities or in rural England get their inspiration from? What does one do if one can't paint a Native?

1. I love how the (western) artists 'claim' that the Indians actually have their own art, besides also being picturesque artistic subjects. It is also interesting that they are referring to crafts - I am guessing that is because the Indians did not make oil-on-canvas pieces or marble sculptures?

2. I am not very sure on this point, but it seems that the form of... I believe it's called 'generic plural' (I am not an expert on linguistics)? I mean forms like 'the Indian' in the second-to-last extract here. Anyway, it seems that this form is often used in some kind of derogatory way. I have mostly seen it in referring to 'mentality' issues, and I can't really think of any examples where it didn't come from a condescending kind of point-of-view. But I'm really not certain if that's true, and it might just be a period thing; so I would love to hear opinions (and examples) on this point.

To me, this seems like the writer is actually agreeing with much of your commentary - in its time, a remarkable statement of cultural relativism.

Please, try to understand things within the context they were written.

"In its time, a remarkable statement of cultural relativism"!!!

No offense, but I think it's pretty. dang. easy. to see it that way.
Too easy, if you catch my drift. Comforting, even.
It may be an improvement over simply agitating for the wholesale extermination of the Pueblo, but let's not get crazy. It's as if they're talking about an old Sequoia (whose destruction would be regrettable, but is probably inevitable, *shrug*). About that level of respect. Granted, that's better than none, but it doesn't feel like they're talking about people, much less cultural/philosophical peers. I'd say remarkable cultural relativism for the time would look more like "Tradition or Civilization: What Shall the Pueblos Decide?" or some such— with "civilization" still meaning "Anglo culture," because c'mon. This is 1920. (Also, it kinda still means that now.) I mean, do the Pueblos have an opinion on this, or what?

Also, we do know what happened. Who does it serve, exactly, to alwaysalwaysalways force ourselves to "understand" the racist attitudes that put us on the path to today "within their context"? I think doing that makes it easier to think this stuff is restricted to oldtyme newspaper clippings. As Gwen noted, this stuff persists, overtly. I don't mean the 1970s, I'm talking about right now, well into the 21st Century. It's racist now, and it was racist in 1920.

Tweets that mention “Shall the Pueblos Be Civilized?” » Sociological Images -- Topsy.com — January 26, 2010

[...] This post was mentioned on Twitter by SocImages, rjgnyc and Simone de Beauvoir, ryan anderson. ryan anderson said: Sociological Images: "Shall the Pueblos be Civilized?" (http://thesocietypages.org/socimages/2010/01/25/shall-the-pueblos-be-civilized/) [...]

Honestly, I can't help but think that this article was remarkably...PC isn't the right word...tolerant, maybe?...for it's time.
True, it's written without much sensitivity or understanding of the Pueblos, but to acknowledge that there even might be a valid reason for them to retain their culture makes this writer seem years ahead of his time, no matter how archaic it may sound today.

I like how he says that the Spaniards "made them accept the Christian faith." That sounds pretty accurate. Doesn't even bother to call it "converting" them.

PEOPLE WERE DIFFERENT FROM NOW IN THE PAST.

You should totally publish this in a reputable journal; they'll be so surprised.

I understand that the U.S is trying to make the country as civilized as possible, but theres people who dont want to be apart of this such as the indians that is recalled in the article. They believed that they should kept thier customs as they were in the past. The U.S gives the right to everyone to live as they please no matter how they might live. I dont think that the "Pueblos" as they call it, to be civilized. This is part of american history and if we get rid of our history then we lose something that was part of american for generations!