Paul S. sent in a link to a cell phone for five-year-olds (plus or minus).  The fact that it has a button for dialing a female and a male person (presumably mom and dad) is a nice illustration of how having two parents of opposite sexes is normative.  Many children have two caregivers of the same sex (e.g., a mom and a grandmother or gay parents) or only one caregiver (or, for that matter, more than two).  But it is expected that a child will have a mother and a father involved in their life.  That this is “normal” will be reflected back at that child again and again, whether or not it reflects their reality. 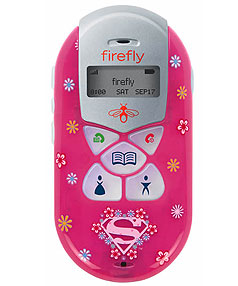 If I have children, and that's a big if, they don't get cell phones until they drive. Period.

I'm always amazed by how unable the designers of these products are of trying to reach a wider audience. If they had just replaced the male/female icons with buttons labeled with numbers/colors/etc they could've easily created a product that would appeal to single mothers/fathers, homosexual couples, or whatever have you.

I think they are already trying to reach the widest audience, the ones with one male parent and one female parent. The icons have genders because its probably the easiest way for children to recognize or understand, i suppose. Even so, it's funny when people for diversity think heteronormative, the icons don't say male and female, or mom and dad, it's you who is assuming that the one of the left is for a female parent and the other for male. I could be brother and sister, or whoever.

Anyway, i've been without a father since I was 7, and I'd never expect for other people not celebrate father's day.

Jared, I understand that but I think there is no real solution, they can't create a product that fits all the audience, they will create the one that fits the most, the same way every hand held machine is meant to be used with the right hand, not because it's discriminating, but because its a wider audience. I'm not saying there should not be products targeted at single parents or same sex parents (which would also fall under the same critique, it would be discriminating), but the manufacturers of these products care about selling, and I'm sure that if parents who are male and female where to choose a phone for their child, they would choose this one over one that has a 1 and 2 instead of icons.

Even them, there could be conflict over why one parent is "1" and the other is "2", or if it would be color based, there would be people disagreeing. I think its the same with why the phone is pink, because a lot of girls like it, independently of what is the ideal, no color gendering?

I'm not trying be rude or a troll, I generally agree with most posts here, but I think this one is debatable.

So, um, what's the deal with the Superman emblem?

This reads as sort of a mountain out of a molehill type post. There are many many phone out there to suit many many types of consumers. Are you saying these phones should be made without the male/female buttons? There probably is another phone already out there that would fit a same sex family's needs. This is like saying that all scissors should be made in an ambidextrous fashion, instead of right handed and left handed models. Kind of pointless.

Is it just me who doesn't see the male/female icons as particularly easy to identify?
You could just as earily interpret those icons as fat person/thin person, or something... They're a weird design.

My biggest beef with this phone is that there are only two people to call. Surely it can't be that abnormal for a young child to rely on more than two adults? I always had the contact info for my moms' closest friends, just in case something happened. As an adult, I live with my fiancé, his brother, and his brother's pregnant wife. I can't imagine giving my niece a cellphone that can only call two people. Never mind that if your child is old enough to need a phone, they should be old enough to read well enough to identify their family members' names.

This phone seems way more limited than it needs to be. It does look like there is a phonebook built in, so again, if the child can read, why are the icons so stupid looking and unnecessarily limiting?

Some cellphone company wanted to make a shitty phone and sell it for way more than it was worth. An adult with average tech-savvy wouldn't have purchased a phone this bare ten years ago, and I doubt that there are very many children in our culture who would actually want a phone that can't play music or text or go online or play games or take pictures.

Also, why is there a girly-fied Superman symbol on this thing?

On a more humorous note, having been raised by a same sex couple, I am certain that if I had had I this cellphone as a small child, there is no doubt who would be the belljar and who would be the scissors.

This phone is not only heteronormative but it is completely abelist (what about kids who are deaf?) and elitist (what about kids that can't afford cell phones) and racist (Everybody knows Superman and Supergirl are white) and infantilizing (The S symbol is either for Superman and Supergirl but there is no Superwoman)! As Jessica on Feministing pointed out, it's the everyday small things that are the most insidious! This is the most insidious thing I have ever seen!

Just wanted to mention a funny story: This cellphone has been around for a few years now and when it first came out, I noticed this in an advertisement and angrily told my friend about how absurd it is. Well, he called the company to see if he could facetiously get one custom-made for me for my birthday (with two "male" buttons--he lied to the company and told them that he is a gay father buying it for his child). Well, they said "no"! I'm not terribly surprised, but it's extremely disappointing. It would have been a great birthday gift if he succeeded and they actually offered other button options (though surely they would have still kept this limited to special requests, I'm sure).

So not only does this phone not represent the "widest possible audience" it represents a norm that is only ideal, not real.

Children finding it normal to have two heterosexual parents? GASP!

Congratulations Ben, You missed the point of the entire post! Go read a book or something :)

Is it me or are there a lot more trolls on this website recently? This post is not about whether children (of any age) should have a mobile phone or not. It is about assuming that children have a mother and father rather than two fathers, two mothers, a single mother, a single father and any other permutation available.

Furthermore, to argue that there are bigger problems out there (as some posts have) is usually a reflection of privilege - and a convenient way of trying to stifle any debate.

Finally Bill Diamond - actually surely the "widest possible audience" would include the 24.1% of nuclear *married* household with children, along with the 9.9% single-parent households and the 7% for families living with blood relatives... What you do is add all three of those numbers together... Clearly it's beyond the possibilities of the imagination to think of a marketable phone that does not automatically prejudge the gender and/or sexuality of the child's parent/guardian.

Presumably, you know what "normal" means, right? I mean the statistical word "normal".

Because there is not doubt that so-called same sex families are at least 3 standard deviations out on the normal curve.

If you wanted to sell a product to a population that could rightfully be called statistically normal, would you tailor the interface of that product to folks occupying the curve at 3 standard deviations out?

Probably you would. But then you're not in a for-profit business, are you?

Fifteen seconds is too long to spend thinking about this, but evidently there are at least two people who have PhD degrees in this kind of trivia.

I think we all forgot that the issue here is that there's separate buttons for a male and female calling thing (like the OP said: mom and dad, female and male respectively).

I agree that this is pretty bad, considering Canada (where I'm from) has legalized same-sex marriages so it makes those children from same-sex families wonder, "Who do I put as the other button?"

They're probably just simulating speed dial, but why can't they just put letters or numbers or shapes or whatever instead of guy/girl symbols?

As for the issue with whether or not children should get cell phones: depends. Yeah it's true that people have functioned quite well without cell phones when we walked uphill both ways from school to home and vice versa, but times have changed. We aren't living in the 5th century anymore, and we have buses, guns, trains, drugs, stalkers, murderers, rapists, etc, and most of all, bad neighbourhoods. If you haven't noticed, it's like the world's getting to be a more and more dangerous place. I agree that 5 year olds should not get cell phones: where the heck would they go when they're 5 anyway? But when they start walking home and there's quite a distance, and they have to go through, if not live in, dangerous neighbourhoods, you aren't going to go knocking on Mrs. Smith's door waiting for her to lend you her landline while you know there's a stalker behind you.

All in all, it just depends on the circumstances.

I posted about this on the Wikipedia article regarding the firefly. The awful thing is that this would be SUCH an easy thing to fix, and they choose not to.