Click here to read about Silo and Roy, gay penguins. They were together for six years before they broke up. One of them paired up with a female. 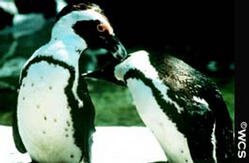 A children’s book, written about Silo and Roy, was apparently removed from the children’s fiction section at two bookstores because it promoted homosexuality.

A same-sex penguin couple, on the right in the picture below, were segregated from the rest of the penguins because they kept stealing eggs.  Sneakily, they would replace the egg with a rock and take the real egg for themselves.  The zoo keepers eventually decided to give them the eggs of another penguin pair who had a poor record of parenting and, the story says, they are among the best parents at the zoo (via Alas). 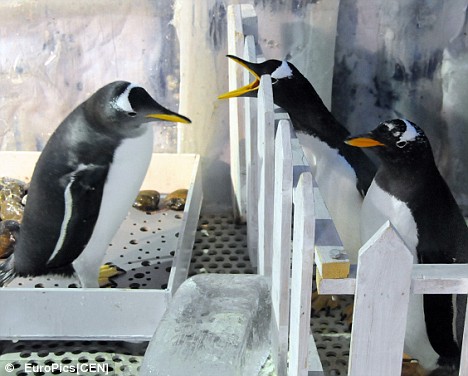 NEW!  Another pair of male penguins, this time at a zoo in Bremerhaven, Germany, have become adoptive parents (via). Z and Vielpunkt: 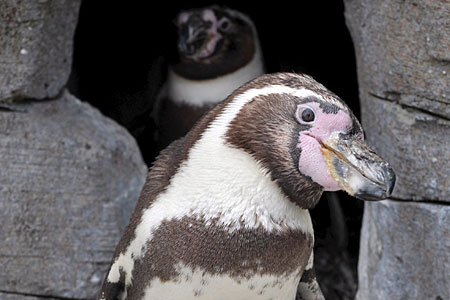 These two male storks, living in a Dutch zoo, are raising a chick together. The zookeepers don’t know how they came across their egg, but somehow they did, and now they’re parents! Click here for the story and a video. 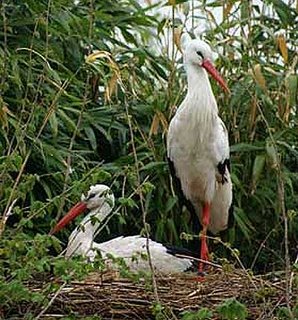 About 20 percent of all black swan couples are male/male according to this study: 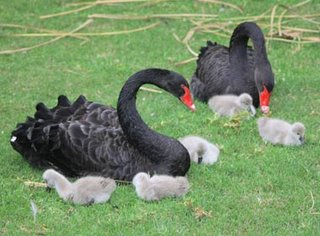 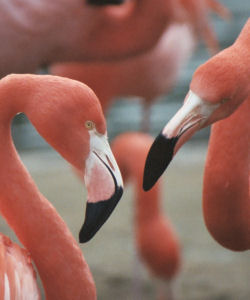 A museum in Oslo has gained some attention for their exhibit, Against Nature?, featuring homosexual behavior among animals. Check it out.

And here is a link to a story about same-sex pairs (1/3rd of all pairs!) among wild Albatross. 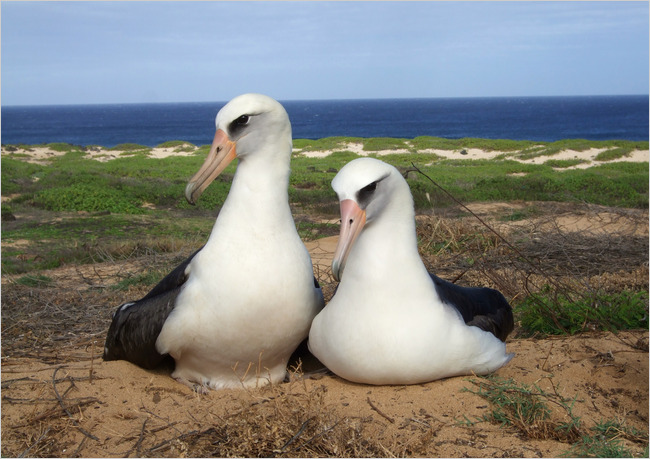 Biologist Lindsay Young, who studies this colony, concurs that about 1/3rd of the couples are same-sex.  They also rear chicks.

The New York Times article, from which I borrowed this images, explains that:

Various forms of same-sex sexual activity have been recorded in more than 450 different species of animals by now, from flamingos to bison to beetles to guppies to warthogs. A female koala might force another female against a tree and mount her, while throwing back her head and releasing what one scientist described as “exhalated belchlike sounds.” Male Amazon River dolphins have been known to penetrate each other in the blowhole. Within most species, homosexual sex has been documented only sporadically, and there appear to be few cases of individual animals who engage in it exclusively. For more than a century, this kind of observation was usually tacked onto scientific papers as a curiosity, if it was reported at all, and not pursued as a legitimate research subject. Biologists tried to explain away what they’d seen, or dismissed it as theoretically meaningless — an isolated glitch in an otherwise elegant Darwinian universe where every facet of an animal’s behavior is geared toward reproducing. One primatologist speculated that the real reason two male orangutans were fellating each other was nutritional.

Courtship behaviors between two animals of the same sex were persistently described in the literature as “mock” or “pseudo” courtship — or just “practice.” Homosexual sex between ostriches was interpreted by one scientist as “a nuisance” that “goes on and on.” One man, studying Mazarine Blue butterflies in Morocco in 1987, regretted having to report “the lurid details of declining moral standards and of horrific sexual offenses” which are “all too often packed” into national newspapers. And a bighorn-sheep biologist confessed in his memoir, “I still cringe at the memory of seeing old D-ram mount S-ram repeatedly.” To think, he wrote, “of those magnificent beasts as ‘queers’ — Oh, God!”

Different ideas are emerging about how these behaviors could fit within that traditional Darwinian framework, including seeing them as conferring reproductive advantages in roundabout ways. Male dung flies, for example, appear to mount other males to tire them out, knocking them out of competition for available females. Researchers speculate that young male bottlenose dolphins mount one another simply to establish trust and form bonds — but those bonds actually turn out to be critical to reproduction, since when males mature, they work in groups to cooperatively gain access to females.

Isn't it strange that we describe animal "relationships" using the same vocabulary we use for humans? "they broke up", "their fifth anniversary".... reminds me of the post about chickens a few days ago.

You can find more info about homosexuality in nature in Bruce Bagemihl's infamous book Biological Exuberance. It also has a chapter about the ways biologists forced their observations to fit into the heterosexual standard image.

I would like to see examples of homosexual mammal couples... it seems it would be easier for a pair of gay birds to adopt an egg. what about female-female pairs?

On homosexual mammals: check out all the info on widespread homosexual activity in bonobos, the chimpanzee's closest living relative.

I never found it odd. I had a pair of male budgies, and they were gay. They frequently would do the normal things a mated pair would do, except actually mating.

[...] | January 15, 2010 Just a quickie in the middle of my morning: please, please, please go read this and look at the extremely cute pictures. Such extreme cuteness. As much as I love penguins, I think [...]

Okay, I can't believe nobody has said this yet: The penguin boyfriends are SO SUPER CUTE =D

interesting at the lack of research/visibility of female animal couples..quite similarly to the human world. wouldn't you agree?

Oh and there's this. It seriously needs to go in the post too. :)

Interesting that all of the stories about long-term couplings and raising young together are birds. All of the other species reported seem to just be getting off on each other, not forming long-term exclusive mating bonds. It seems unlikely that humans are the only mammal that does this, if it's so common in birds.

Catfish and the Influences of Heteronormativity | SociologyFocus — March 11, 2013

[...] makes people feel like heterosexuality is “natural”. Check out this article on same-sex behavior in the animal kingdom. Do a little further research on biological and social [...]