What Stories Are the Media Covering?

Hank M. sent us a link to this image that shows the proportion of news coverage in 55 outlets for various items throughout the year (click here for a larger image; to read more about the methodology and the news outlets, see Journalism.org): 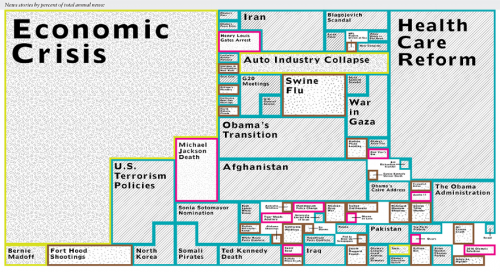 Journalism.org puts out a weekly index as well, broken down by type of source (network TV, newspaper, etc.). Some of the results for Dec. 14-20 show some interesting differences. Here are the top-10 lists for newspaper and network TV, respectively: 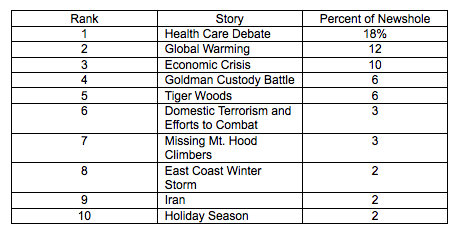 The top three stories are the same, and clearly dominate both types of media outlets. TV sources seem to do more “human interest” or “entertainment” coverage of things like Tiger Woods’s scandal, the Goldman custody battle, and the missing climbers. (My mom and grandma were both distressed that I wasn’t aware of the missing woman in Utah or the Goldman custody case and said that I need to keep myself more informed of the world around me by taking the time to watch the news on TV so I’d know what’s going on in the world.)

Cable TV outlets had the same top 3 stories, but actually emphasized them even more than newspapers and network TV did, with health care getting nearly twice as much coverage as it did on the networks (radio had the same pattern):

Their database is archived and searchable, and it provides a rather fascinating view of what is considered newsworthy each week and how that depends on the type of outlet.

Also check out our posts on google searches for information about Afghanistan and Tiger Woods, the “dithering” meme,

i would love to see the same thing for european news coverage...

Thank you for treating the word "media" as plural!

[...] chart gurus over at Sociological Images have posted the following visual depiction of what the media talks about (for the humongous [...]