Google Searches for Information about Tiger Woods vs. Afghanistan

When thinking about how media coverage affects public perceptions, many people think of it in terms of an “injection model”–that is, media outlets “inject” ideas into a passive public, directly affecting what they think (or, anyway, what everyone else thinks, since most people are convinced that they personally aren’t affected). Many researchers have argued this model depicts media audiences as having little agency when it comes to interpreting things they read or hear. People do ultimately decide what they think of issues, though the media play a large role in defining what issues are worth thinking about.

I have spent the last several days being mystified and annoyed by the number of news stories I’ve heard about Tiger Woods and his wreck and apparent affairs. I do not understand why this is national (and even international) news, and why news outlets from Fox to NPR found it worthwhile to have on commentators to talk about the fact that an athlete cheated on his wife.

Upon hearing my grumbling, my friend Larry (of The Daily Mirror) sent in this Google trends graph showing searches for “Tiger Woods” and “Afghanistan” during the last month: 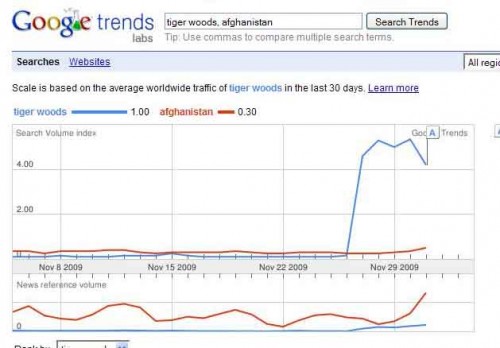 The top graph shows searches for those terms; the bottom graph shows the frequency of them in news stories distributed by Google News. What was interesting to me is that news coverage has actually been higher for Afghanistan, with the gap growing during the days following the Tiger Woods story, but searches have followed the opposite pattern, with the enormous spike in searches for Tiger Woods in the last few days. It’s possible that TV media outlets have covered the Tiger Woods issue more than print media, so that could show a different trend.

But from what we see here, it appears that public interest isn’t being driven solely by media coverage, and any increases in news stories about Tiger Woods may be a response to an appetite for more information. That doesn’t mean media coverage doesn’t play a large part in framing public discourse–after all, we wouldn’t even know about the Tiger Woods story if it didn’t get some initial media coverage–but media outlets don’t decide what to cover in a complete vacuum, with the ability to get the public interested in any story they report on.

Also see our posts on CNN questioning whether Jon and Kate’s divorce was getting too much coverage, which missing children get media coverage, the media shape reality, and coverage of Obama and Clinton.

Macon D has an interesting post on the role of race in the Woods fixation -- http://stuffwhitepeopledo.blogspot.com/2009/12/care-more-about-messed-up-love-life-of.html

This really f--king makes me angry. I read a lot of news and blogs that vary on topics. I read political news, I read blogs about racial/POC issues (like Racialicious and Stuff White People Do, Muslimah Media Watch), and for lighter reading, I enjoy reading film critique blogs written by film snobs.

I saw an article on the Hollywood Reporter the other day that "MICHAEL JACKSON" was the most searched keyword on Google for this year. Really? WTF? Nobody cares about dying troops or Afghans or Iraqs, yet people make a big f--king deal over a dead pop star who was probably a child rapist.

re: Jon & Kate 8-- that's the reason I stopped reading CNN. I was dismayed to see that "MOST READ/MOST E-MAILED" articles were about celebrities, sex scandals, and/or gossip.

Yeah, it's tough. And as my friend says, "It's always a slow news day in the Middle East." It's like that elephant that we know is there, but people just talk around it or refuse to acknowledge it.

Maybe it's the illusion of hopelessness that I think many people seem to share in the face of politicians or economic matters now. I dunno, but keep that tabloid crap out of my brains!!!

Frankly, I think we live in a world that profoundly dis-empowers people. I think it is very hard to watch the news when we know that there is absolutely nothing we can do about it. Imagine yourself helplessly watching a loved one suffer, and then imagine how hard it would be to love the world.

Anyways. I don't think it's illusion; it's probably something like hopelessness, but also more. Hopelessness is just a feeling; powerlessness is a position within a broader social organ.

(So anyways, I think I'm agreeing with Jamie above.)

I agree that this is sad. But one thing is you have to expect that when news breaks, it will be popular for a short time, and probably taper off. Afghanistan is an ongoing story, while celebrity deaths and scandals are individual events. I'm sure we'll still be talking/reading about Afghanistan next month, next year, while I hope we are not talking about Tiger Woods' mistress. I definitely believe that celebrity news is too popular, with both the media and the public, but I wanted to throw that out there.

I guess this is a prime example of the Agenda Setting Function theory (not so much an injection theory, in my opinion). It happens all the time, constantly, because someone is always deciding what gets reported in the media, in whatever form that may be. The whole Tiger Woods thing is a pretty obvious and bizarre example, though.

[...] Several people recently asked, “You write about relationships. What do you think about Tiger Woods?” As I’ve said before, If PERSON A cheats on PERSON B with PERSON C, it’s really no one’s business except the parties involved. Tiger is neither my father, lover, husband nor an acquaintance. Right now, I wouldn’t necessarily want to be in Elin Nordegren’s shoes. That said, I’m uninterested in her & her husbands’ personal affairs. In fact, I think the fascination with love lives of the rich & famous says more about our country’s penchant for gawking than it does about our spry young Tiger’s alleged ability to wear women out. Pssst! If you’re interested in theories about Americans’ general views on cheating, I’ve previously written about the topic over at Huffington Post. (Link: Political Sex Scandals: Obama, McCain & Palin.) I also recommend Google Searches for Information about Tiger Woods vs. Afghanistan. [...]

What Stories Are the Media Covering? » Sociological Images — December 31, 2009

[...] check out our posts on google searches for information about Afghanistan and Tiger Woods, the “dithering” meme, Leave a Comment Tags: discourse/language, media, [...]