The Execution of Old Men

Chris Uggen, fellow sociologist and editor of Contexts magazine, put together a graphic for Public Criminology comparing the current age of death row inmates in the US with their age at arrest (in the title, I assumed they were mostly men, but I don’t know): 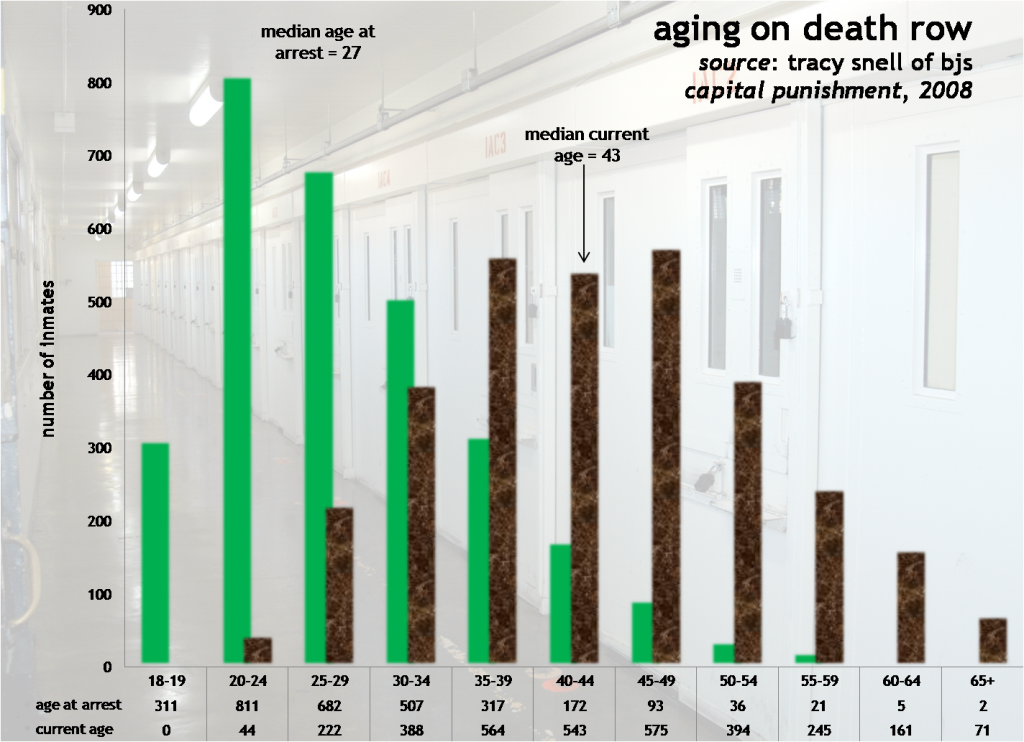 So the median age at arrest is 27 and the median current age is 43.  This illustrates the lag time between arrest, conviction, sentencing, and  execution.  It also creates the conditions for what Uggen calls the “graying of prison populations.”   We are executing mostly middle-aged men and older, even as the young are disproportionately convicted for committing violent crimes.

I suppose whether or not we support executing a 50-year-old man for a crime he committed half a lifetime ago depends on what you think the death penalty is for.   Is it to satisfy the family of the victims?  Is it for revenge?  Is it for deterrence?  Is it to make the world outside the prison a safer place?

Executing people in their 40s, 50s, and beyond makes more sense if your goal is something like revenge, less sense if your goal is a safer world with less violent crime.  So, how we frame the death penalty (that is, how we answer the questions “what is it?” and “what is it for?”) shapes whether the graph above looks like social justice or social tragedy.

I think the long imprisonment time between arrest and execution actually reflects our reluctance to carry out capital punishment. The time is intentionally long in order to give prisoners ample time to appeal their sentence, cutting down on the likelihood of executing someone for a crime they didn't commit. Looked at that way, I think the aging death row population makes perfect sense and is actually more fair to the prisoners.

If we think that killing people is not a good idea, why should we inflict on others?

Interesting. To the author, Lisa Wade: I do not follow your "makes more sense for ___"/ "makes less sense for ___" logic, because you merely claim it and hardly defend it by connecting the information you present previous to this conclusion.
I feel that capital punishment makes MORE sense if your goal is to have a safer world, in that you are eliminating past & highly potential killers from parole / escape and killing again (not to mention the threat they may pose to inmates and officers). There are countless cases of "reformed" prisoners let out for parole who take innocent lives, again and again.

Capital punishment also sends a message. If you cannot respect another human's life, you lose your own.

I was also surprised that you did not reference the economic disadvantages of this capital punishment- aging relationship. Capital punishment makes less sense from an economical perspective, because after all of those trials, retrials, psychiatric care, room, board, supervision, etc., life in prison is LESS expensive for the government than putting someone on death row.