U.S. and Japanese Versions of the Cover for Spice & Wolf

I recently posted about the de-gaying of the movie A Single Man in promotional posters and trailers for different audiences. James H. (of Town Creek Poetry) sent us an example of how the cover of the book Spice & Wolf was changed for the U.S. market (the original is the Japanese version; image found at siliconera): 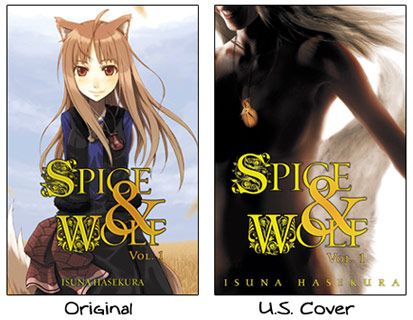 So we move from a fully-clothed manga character to a cover with a photo of a naked woman with her head cut out of the image, removing all subjectivity. The publisher says they did so in order to try to draw in a wider audience than people who are already interested in manga, and apparently they decided that a naked woman is the way to draw the interest of U.S. readers.

I wish I could say they’re totally wrong and it would never work. But clearly Evony also thought it would be effective. I wish I knew how their sales have changed as their advertising became more boob-centric.

The really funny thing is that the novels (there is a comic and an animated series, too) are mostly about economics in a Medieval-ish society. Seriously. The protagonist is a merchant and you have the socioeconomic background explained to you :D

The character on the cover is Horo (or Holo, depending on the translation), a wolf goddess of crops (hence the ears and tail). It's medieval-ish, not historical...

That's really funny because I'd rather buy the book with the manga cover than the U.S cover. The U.S cover looks like a corny, cheap, $5.99 paperback romance novel written by a mediocre fiction writer, in a very Lifetime-ish way. The kind of stuff that I always avoid.

Ironically enough the first episode of the anime adaptation of this series has Horo (the wolf girl) completely buck naked for almost the entire thing, but because she doesn't really have a sense of human sexuality due to being a wolf god it doesn't really come off as fanservice or exploitative (at least to me, and I know a few others who've said the same thing). There are several drawings of her nude that are done tastefully in the original Japanese because they don't sexualize nudity as much as American culture does.

The American cover, on the other hand, does come off as sexualized at least to me. I wish they'd kept the Japanese cover not only for that reason but because it looks much more asthetically pleasing to my eyes than the clear photoshop job this was.

The latest Evony adverstising I have seen (over the last couple of weeks or so) does not feature a woman. It's what seems to be a screenshot of the actual game.

Hopefully the GET YOUR SEXY WOMAN HERE advertising wasn't as successful as they anticipated.

Filth and trash as it is expected from the yank.

The U.S. cover is probably also at least partly in the interest of making it look more adult. Depending on the content of the book, they might want to get away from the childish and family friendly connotations cartoon characters have in the U.S. and such. Whether or not sexualized nudity is the best or most sensible way of doing that is of course still up for discussion.

that particular image of a naked body doesn't appear sexualized to me at all. it's rather androgynous, the shadows hit it so it's more of a silhouette anyway. to me it evokes something angelic/demonic/spiritual, a mystery that would probably be lost if the face was shown. also i prefer not to have the book's characters pictured on the cover, imagining what they look like is a big part of the fun of reading.
while i probably wouldn't have reached for either book, the original cover is very unappealing to me, although i used to read a lot of manga.
both versions seem very generic of course.

Ummmm... did none of you notice the tail? It ties it to the original, at least in a marginal way. But yeah, giant fluffy tails aren't really within the borders of dinestaore novels, thankfully.

Seems like a case for Erotica Cover Watch (eroticacoverwatch.wordpress.com)...

Check this out too, how cutesy japanese game covers have been made more aggressive-looking in the american release.

As much as I'd love to make a relevant post, I can't get past the mangled anatomy on the US cover to think of anything else. Human beings to do not look like that. Massive neck, freakishly narrow skull, chopped up sternomastoids, bizarrely bisected square boob, a gaping pit where the other boob should be, no shoulder blades or serratus anterior OR EVEN RIB CAGE. In fact, I don't see any bones at all except the collar bone. She appears to be made of putty and the burn tool. How do people this bad get work, and why don't I have their job?

They wanted a wider audience, but they could only afford to pay a third-rate artist just out of high school that had never studied anatomy or lighting in their life? What?

I hate to be the only person to point this out so far, but the cover targets the exact same audience: the lonely, single, stereotypical, male anime-fan. The only difference is what we see that stereotypical fan /as./ I'm going to make some sweeping generalizations here, but I do believe the covers warrant it:
American/Western: gaming fan; high-quality graphics 3D games that are commonly translated/exported (e.g. Final Fantasy) because they have greater audience appeal
Japan: gaming fan; dating-sim game fan, domestic-release games which are often 2D
[In addition, the "stereotypical anime fan" is often seen as a 'moe' fan http://en.wikipedia.org/wiki/Moe_%28slang%29
http://www.nytimes.com/2009/07/26/magazine/26FOB-2DLove-t.html "Moe subculture has spawned a substantial market of goods centered on the desire to live in 2-D, from virtual girlfriends to body pillows to busty desktop-size figurines to cafes with waitresses dressed up as video-game characters."]

Both of these images are 100% stereotypical gamer/anime fan sexual-fantasy women. To rephrase it bluntly, the women on the cover are wanking material. I might point out that even though they are average (at best) examples, the point is to get a lonely-gamer to pick it up and buy it. (see Evony ads) The Japanese image seems "chaste" to the uninitiated, but it is equally sexually charged.