Nora R. sent us a link to an article at Band of Thebes about how promotional materials for the movie “A Single Man,” staring Colin Firth, have been altered to imply that the central relationship in the movie is heterosexual, and to eliminate references to the fact that Colin Firth’s character also has male lovers. A poster for the movie: 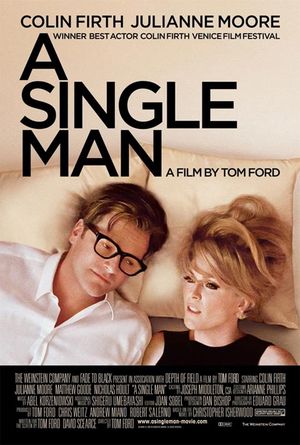 From the post at Band of Thebes (quote is originally from another article, but you have to sit through a 30-second ad to get to it; there’s a link at the Band of Thebes post if you want to see it):

“The new trailer essentially is altered to suggest the core of the film is the relationship between Colin Firth and Julianne Moore’s characters, even removing from the end of the trailer the names of both Matthew Goode and Nicholas Hoult (who play Firth’s love interests). Moreover, in the first trailer, we see Firth’s character kiss both Goode and Moore, in the second we just get Moore. There’s also a sequence of shots in the first trailer which crosscuts Firth, who plays a professor in the film, staring into the eyes of both a female student and a male student. In the second, as you might guess, we only get the female (in a telling twist, instead of cutting to the male eyes, the trailer cuts to a quote from Entertainment Weekly saying ‘[Firth’s] performance is bound to win attention in this year’s Oscar race’).”

Of course, studios often manipulate what a movie appears to be about to appeal to as wide an audience as possible. If you saw some of the previews for “Twilight” that were shown before movies that targeted men, you’d think the movie was a lot more violent and action-heavy than it actually was (I presume to the dismay of some of the viewers who went to see it thinking they were seeing a vampire action movie).

But it’s interesting that a movie in which the main male character’s relationships with other men is a central element is advertised with that main plot point obscured.

I'm not a movie person but this one looks great. The first trailer sold it more than the second one i thought.

One of my friends sent me one of these trailers and it took a lot of insight on my part to figure out that this was a gay movie- I believe it was a word about "partners" or something that seemed very coded.

Seems odd to me. Maybe they're trying to make it a dramatic reveal?

Oooh, I want to see this. Even though Colin Firth looks like Conan O'Brien on that poster.

"If you saw some of the previews for “Twilight” that were shown before movies that targeted men, you’d think the movie was a lot more violent and action-heavy than it actually was (I presume to the dismay of some of the viewers who went to see it thinking they were seeing a vampire action movie)."
They're doing this again with the trailers now airing for the second one...

They did this with the trailer for the new "Dorian Gray" movie; there's a montage of him making out with a series of lovely ladies, and then one image of what I think is a masked man handing him a white rose, and then him with another lady. This in the trailer for a movie based on a book that was used as evidence against Wilde for "gross indecency." It isn't that Dorian doesn't get up to all sorts of indecent things, but not all of his dalliances were with women. Not by a long shot, if I remember the book correctly (but it's been awhile).

I'd imagine this isn't necessarily to "de-gay" it, but for there to be a huge revelation to the audience. I love that. I can't stand it when the trailer gives everything away. The first trailer isn't morally outrageous to me or anything like that, but it's just WAY too revealing of the plot direction.

Didn't Paramount do the exact same thing with Brokeback Mountain?

My educated guess is that these two trailers will be screened before different sets of films, thereby attempting to talk to different audiences. Hollywood assumes a lot about its audience, and in this case, it looks like they think they can sell it to at least 2 crowds (the divide is less sexuality than gender I'd imagine).
What struck me in these two trailers are the aesthetic pointers to Mad Men: not only is it set in the 1960s (in the first trailer there's a date, not in the second) but the male body falling / sinking with the close ups of eyes and lips... Very savvy cut!

Before watching the videos, I was hesitant to accept the accompanying commentary about the elimination of the gay aspect of the movie. After watching them, though, I have to agree. The review praise of the movie is specifically inserted over those scenes which showed homoeroticism, and those that remained (lying on the beach) were severely cropped and shortened. I am not sure what the purpose of this is, as the audience would be seeing the same movie, and those who have only seen the second trailer would be mislead into expecting a traditional heterocentric plot line.

U.S. and Japanese Versions of the Cover for Spice & Wolf » Sociological Images — November 19, 2009

[...] recently posted about the de-gaying of the movie A Single Man in promotional posters and trailers for different audiences. James H. (of Town Creek Poetry) sent us [...]

I've seen and reviewed this film (http://ferdyonfilms.com/2009/10/ciff-2009-a-simple-man-2009.php). The truth is that Ford is very forthright about homosexuality, but avoids physically explicit displays, even refraining from having Firth and his lover kiss. There is no explicit nudity either. This is a film about love and loss, and is quite impressive for a debut directorial effort.

Oh, wow -- the topic of this post and the comments to it just scream bi-invisibility.

This has to be the worst movie I have ever seen in my 62 years on this Planet.It had no Story,and a very weak Star.
If directors of cheap movies have to falsely advertise this crap for financial gain,then the Movie Industry is at an all time LOW.