Joshua found a post over at Letters of Note about this letter, written by an Australian government employee in 1963 to the Director of Trade Commissioner Services, arguing against hiring women: 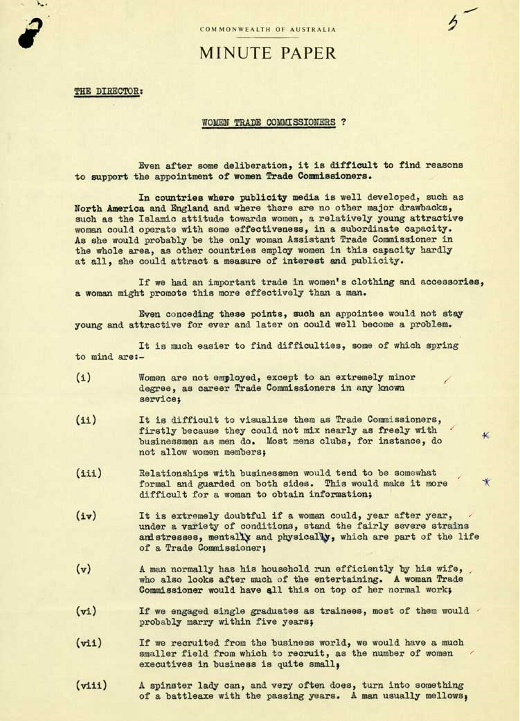 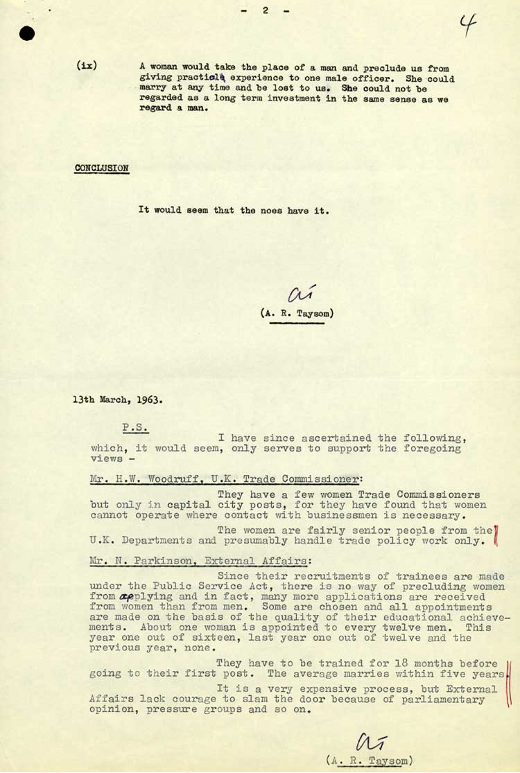 Even after some deliberation, it is difficult to find reasons to support the appointment of women Trade Commissioners.

In countries where publicity media is well developed, such as North America and England and where there are no other major drawbacks, such as the Islamic attitude towards women, a relatively young attractive woman could operate with some effectiveness, in a subordinate capacity. As she would probably be the only woman Assistant Trade Commissioner in the whole area, as other countries employ women in this capacity hardly at all, she could attract a measure of interest and publicity.

If we had an important trade in women’s clothing and accessories, a woman might promote this more effectively than a man.

Even conceding these points, such an appointee would not stay young and attractive for ever and later on could well become a problem.

It is much easier to find difficulties, some of which spring to mind are:-

(i) Women are not employed, except to an extremely minor degree, as career Trade Commissioners in any known service;

(ii) It is difficult to visualise them as Trade Commissioners, firstly because they could not mix nearly as freely with businessmen as men do. Most mens clubs, for instance, do not allow women members;

(iii) Relationships with businessmen would tend to be somewhat formal and guarded on both sides. This would make it more difficult for a woman to obtain information;

(iv) It is extremely doubtful if a woman could, year after year, under a variety of conditions, stand the fairly severe strains and stresses, mentally and physically, which are part of the life of a Trade Commissioner;

(v) A man normally has his household run efficiently by his wife, who also looks after much of the entertaining. A woman Trade Commissioner would have all this on top of her normal work;

(vi) If we engaged single graduates as trainees, most of them would probably marry within five years;

(vii) If we recruited from the business world, we would have a much smaller field from which to recruit, as the number of women executives in business is quite small;

(viii) A spinster lady can, and very often does, turn into something of a battleaxe with the passing years. A man usually mellows;

(ix) A woman would take the place of a man and preclude us from giving practical experience to one mail officer. She could marry at any time and be lost to us. she could not be regarded as a long term investment in the same sense as we regard a man.

It would seem that the noes have it.

P.S. I have since ascertained the following, which, it would seem, only serves to support the foregoing views –

They have a few women Trade Commissioners but only in capital city posts, for they have found that women cannot operate where contact with businessmen is necessary.

The women are fairly senior people from the U.K. Departments and presumably handle trade policy work only.

Since their recruitments of trainees are made under the Public Service Act, there is no way of precluding women from applying and in fact, many more applications are received from women than from men. Some are chosen and all appointments are made on the basis of the quality of their educational achievements. About one woman is appointed to every twelve men. This year one out of sixteen, last year one out of twelve and the previous year, none.

They have to be trained for 18 months before going to their first post. The average marries within five years.

It is a very expensive process, but External Affairs lack courage to slam the door because of parliamentary opinion, pressure groups and so on.

I find point (v) particularly fascinating, as it expressly recognizes the benefits to male professionals of having a wife at home doing many types of behind-the-scenes labor that contribute to his success, and that a female professional might be at a disadvantage in a world in which she is expected to compete against men who do not have to do a “second shift” of childcare and housework after they get home.

I am 34 and unmarried. Do I qualify as a “spinster lady” yet?

See also our recent post on a U.S. letter from the 1930s begging for women to be fired so men could have their jobs and this rejection letter, based on sex, from Disney’s Painting Department.

I love it. And this was in my parents' time! It is a fascinating demonstration of how rapidly our society has restructured itself to accommodate a dual family income, which also puts into perspective how far America, specifically, has yet to go in terms of supporting women in the workforce by offering adequate childcare. As hilariously outdated as some of these reasons for denying work to women are, many of them still persist in some fashion or another.

The conclusion is my favorite part, and a good bit of evidence for anyone that doubts the necessity of legislation in desegregating the workplace.

I found the point: "A spinster lady can, and very often does, turn into somewhat of a battle axe with the passing years. A man usually mellows" to be quite ironic. Isn't it the belief that there is some inherent tenacity that men possess that makes them a natural fit for business? So wouldn't this be, in some way, an argument for hiring spinsters? This thing is full of grand generalizations and false logic that are kind of upsetting. However, at least I have something new to put on my dartboard.

I'm going to say that 35 is the magic age at which you should expect to transform into a battle axe.

I say this first because it's a nice half-round number, and second because it's still ahead, so you have time to plan a big, awesome Spinster Lady party to celebrate.

To celebrate, and to warn those around you that you have become dangerously axelike ("formidable or belligerent" as Wiktionary says) and they should tread cautiously around you and cater to your every whim.

Your other option, of course, is to find someone to marry right quick, which will obviously mellow you and prevent the formidable belligerence of spinsterhood from setting in.

Have your male peers mellowed yet? I think that's the true test. The men I have known HAVE mellowed...at about 65.

Wow, this is a particularly cringe-worthy post! It's amazing the progress we've made in 40 years.

The one point he made that was actually useful was that women are less likely to be able to develop business relationships with a man and extract information. IF the prevailing culture is that women don't have respect in the business world, THEN hiring a man does make more sense. It's the same principle as hiring locals abroad. If you're expanding your company into Brazil, you want to go hire a bunch of Brazilians to navigate the company's legal system and cultural mores. It doesn't make it right, but it's just the pragmatic business thing to do.

But that single good point shouldn't detract from the overall eye-goggling cringe-inducing ridiculousness of this.

Have we actually progressed much, though? I would say many of these would still be used as justification for discrimination against women, although not openly. It just seems to me the sexists were franker then, and even readily recognised (in a twisted way of course) stuff like the closed old-boys network and the double workload of a career woman.

On my parents' marriage certificate, my mother's occupation is "spinster". I wonder if they would've put "crazy cat lady" if she owned cats?

I love that the world "battleaxe" is literally in a government document. Yeesh.

A spinster lady can, and very often does, turn into something of a battleaxe with the passing years.

I want to cross stitch this and hang it on my wall to give me something to aspire to.

On that last paragraph in the letter, where it's stated that the average woman marries within five years - in the Australian federal public service, it was compulsory for women to resign when they got married. This policy only ended in 1966!

There's a bit about this and women's work in Australia here, including some video:
http://australianscreen.com.au/titles/love-or-money/clip3/

I object to all the suggestions and most of all on the part about the attitude of Islam against women. LOL, as far as I'm concerned Muslim women has become presidents and prime ministers more often than none Muslim countries. It's popular opinion that women are not given education in Islam when more often than not Muslim women in my community although with certain ideas attached to becoming a homemaker is more important (just like in the West) they're encouraged to work and are often highly praised when they succeed, not much maternity leave I'm afraid but women are hardly laid off if pregnant where I come from - infact almost never, in Brunei that is lol.

WTF? Are you kidding me? Is this $%#@! still even worth writing a paper about?